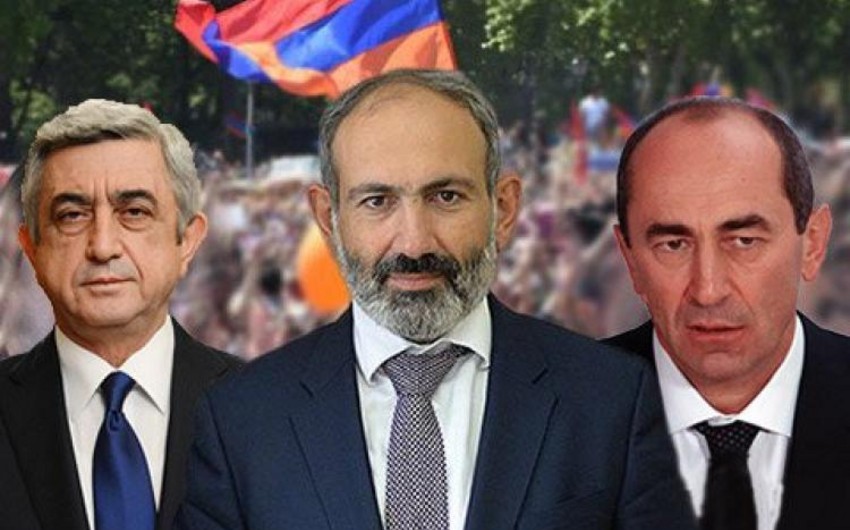 Armenia is a provocative and unstable country in the region. Groundless territorial claims against neighboring states also confirm that it is engaged in violent activities. With this situation, Armenia is blocking the integration of the South Caucasus into the West, promoting the interests of the third forces in the region, undermining stability and threatening the security of the region.

By the way, the release of former Armenian president Robert Kocharyan, who played a key role in the recognition of Armenia as an occupying and genocidal state once again exposed the situation in the country. It turned out that the Armenian judicial authorities are under the control of a foreign state and carry out its functions.

Just like the April 2016 war broke out myths about this country's military might. It was a disintegration in Armenian society and power. The movement, which could change the power in 2018, managed to recover the Armenian society somewhat. The pickets in front of the court buildings showed the fragmentation of the Armenian society. The lack of people in the protest action, speeches against European integration, the conflict of interest between Armenians in Armenia and Nagorno-Karabakh territory of Azerbaijan and the increasing contradictions are the facts confirming the dissolution of the myth about unity of Armenian society. It turned out that the Armenians living in Karabakh are the main power in Armenia. Armenia's independence has been restored for 28 years. During the 20 years of this period, the Armenians who were once the Azerbaijani citizens headed the government. Robert Kocharyan was the President of Armenia in 1998-2008 and Serzh Sargsyan - in 2008-2018. The second one was the prime minister on April 17-23, 2018. Sargsyan even served as the Minister of National Security of Armenia. Former Azerbaijani citizens from Karabakh have been in various positions in Armenia. For example, former Defense Minister Seyran Ohanyan, former Chief of Staff of the Armenian Armed Forces Movses Akopyan and others. This list can be extended. It turns out that in Armenia there are no personnel to govern the state or the most reliable officials are former citizens of Azerbaijan.

In fact, the Armenian society changed the government in 2018 to get rid of the Armenians from Karabakh.

Apparently, they did not have enough power to do more. Former citizens of Azerbaijan are still dominating in Armenia. Their activity deepens the fragmentation of the Armenian society. Those in power have begun to admit that. According to the "Past" newspaper in Armenia, Prime Minister Nikol Pashinyan has instructed the power structures to investigate the fragmentation of Armenians.

"A few days ago, Armenia's well-known oligarchs and Karabakh 'generals' gathered at a villa.The meeting was organized by Samvel Karapetyan (former deputy defense minister of the separatist regime - ed). Participants have pledged to do their best to overthrow the government of Nikol Pashinyan.

"Samvel Aleksanyan (entrepreneur, MP from the former ruling Republican Party, engaged in import of sugary and vegetable oils to Armenia) took part in the meeting".

Hence, if Nikol Pashinyan and Armenians from Armenia do not take control of the situation, there will be new surprises. It also shows that the role played by Armenia in occupation of Karabakh worked against the independence of Armenia. In other words, the authorities in this country, Armenia's Karabakh claims blocked Armenia's independence. The dependence of the Armenian economy on Russia, the problem of "Karabakh Armenians", problems in the course of Armenia's foreign policy, the constant resentment of the population in the country, the absence of social, political and economic stability are the claims of Armenians on the Azerbaijani lands and Armenia's occupant nature.

The social research conducted by the US-based Gallup International Association revealed that the problem of Armenian citizens is not the Karabakh issue, but unemployment. 45 percent of respondents said that unemployment is the main problem of Armenia. 40.5 percent of respondents preferred to improve the economic situation in the country. 26.8% complained of low salaries and wages. 26.1% consider the Karabakh problem as an important issue for Armenia. The respondents also noted emigration, corruption and terror among the main issues of the country. As a result of the investigation, it became clear that the population of the country is in the state of psychosis. Gallup says 45% of people responded with sorrow, irritation and stress.

Finally, Nikol Pashinyan and the political forces supporting him are more pro-westerner. Armenians from Karabakh are, unambiguously, pro-Russians. According to the results of the survey, Armenians from Armenia prefer to integrate into the West and the occupation of Azerbaijani lands is not a priority for them. And those who violate stability in the country are the "Armenians from Karabakh ". They also hinder the development of Armenia.

The recent developments have also proven that keeping Nagorno-Karabakh under occupation also destroys Armenia's international prestige. Their patrons also do not deny it. Hence, the Karabakh issue and "Armenians from Karabakh " have become a key tool to threaten Armenia's independence. But there is a way out. It goes through putting an end to the occupation of Karabakh, refusal from improper and groundless territorial claims to neighbors, not being an instrument in the hands of others and getting rid of hate and greed. Today, Armenia is far from that road. The occupation of Nagorno-Karabakh and the " Armenians from Karabakh " threaten the country's independence and sovereignty.