Georgian president’s behavior or who does this provocation serve? - COMMENT

Georgian president’s behavior or who does this provocation serve? - COMMENT A head of a family and a country have almost no right for mistakes. And while the mistakes of a family head can be corrected, the president's mistake sometimes takes years to correct. 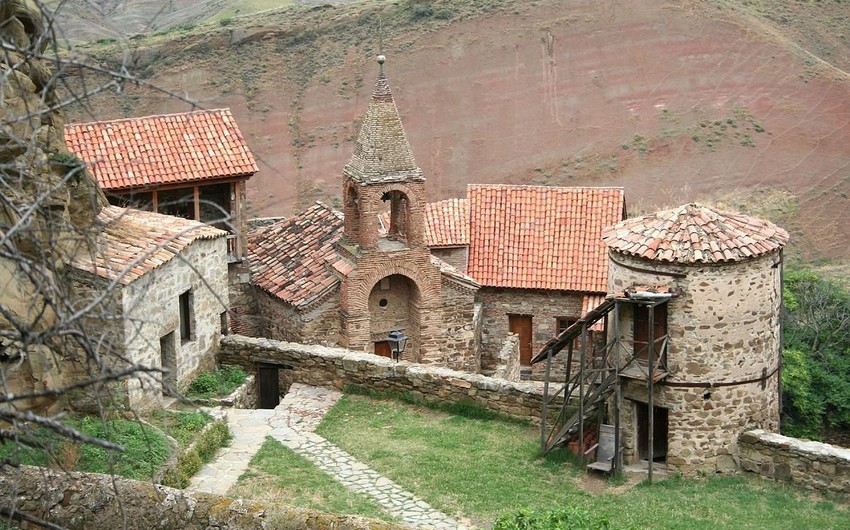 A head of a family and a country have almost no right for mistakes. And while the mistakes of a family head can be corrected, the president's mistake sometimes takes years to correct.

Georgian President Salome Zourabichvili was also remembered in six months of her term in office by provocative actions and statements against Azerbaijan.True, she was distinguished from her forerunners with unpleasant actions towards Azerbaijan when she was a foreign minister (from March 20, 2004 to October 19, 2005).

The reason why she was fired after serving only 1 year and 7 months was her insult against the then-Speaker of Parliament. She accused the leader of the United National Movement party in particular Nino Burjanadze of creating a clan dictatorship. It turns out that the provocation is a characteristic feature of the current Georgian leader.

So, on January 20 this year, the bust of Mikhail Avagyan, who was involved in the occupation of Azerbaijani lands and shed the blood of Azerbaijani and Georgian people, was installed in Samtskhe–Javakheti region of Georgia. This Armenian gunman also fought against Georgia's territorial integrity in Abkhazia. The fact that the event was held on January 20 is a moral and psychological provocation against Azerbaijan and the Azerbaijanis around the world. Salome Zourabichvili gave a number of promises to the Armenian electorate in the Akhalkalaki Municipality during the election campaign. The installation of this bust can also be considered as one of those commitments. In such a way Zourabichvili took revenge on Azerbaijanis who voted for Mikheil Saakashvili in Borchali region. Although she is the president of the Democratic Forces and all the citizens of Georgia, it seems that her rage against Azerbaijan and Azerbaijanis is not forgotten.

Salome Zourabichvili, in one of these days, attempted to draw the opposite side to provocation by expressing a unilateral position towards disputed border issue between Georgia and Azerbaijan. She visited Mount Keshikchi Dag and made an effort to justify her wrong step: “It is not right to say that something new happened. I visited the temple before. I'm surprised by the statements of those who claim that they are patriots and that my visit to the monastery complex is part of a certain provocation. Should the president not visit anywhere in the country?”

No Mrs. Zourabichvili! This territory is disputed. According to the Georgian constitution, the president is the head of state. The President is the Supreme Commander-in-Chief of the Georgian Armed Forces, representing the state in international relations. And the visit to the disputed region is a violation of international law. Only after solving the issue can the head of state visit that region. Otherwise, it can be regarded as occupation.

By the way, let us briefly inform you about this area. The monastery complex partially is located on the territory of Azerbaijan on the border with Georgia. Part of the complex is located in the Agstafa region Azerbaijan and Sagarejo district of Georgia. It is at an altitude of 850 meters above the sea.

The complex was founded in the 6th century by David (St. David Garejeli), one of the thirteen Assyrian monks. From the late 11th to the early 13th centuries, the economic and cultural development of David Gareja reached its highest phase. At that time, the State of Atabeys, as well as the Shirvanshahs did not support the Christian temples.

In those days, Christian Albanians, who were already few in number, moved to the mountains.

After the restoration of Georgia's independence in 1991, the monastery life in David Gareja was revived.

Meanwhile, the Patriarchate of Georgia has not left Salome Zourabichvili behind. The statement made on May 2 said: “We also declare that this temple is one of the oldest monuments and culture of Georgian culture, and the Georgian Church will do its best for its protection." Nevertheless, the Georgian Patriarchate has strongly urged any person to abstain from attempts to aggravate the friendly relations between Georgia and Azerbaijan, as well as to abstain from insulting Muslims: "We believe that these attempts are provocative or unpopular provocations against other nationalities, as well as Muslims in Georgia." From this point of view, Patriarchate confirmed that Salome Zurabishvili is involved in provocation.

By the way, today the property disputes are the primary source of tension between Armenia and Georgia. In Armenia, the Georgian Orthodox Church demands an official status and ownership of five monasteries in areas near the Armenian-Georgian border that it claims were founded as Georgian churches. Four of the disputed properties are in the Lori region -- the monasteries of Akhtala, Kobair, Hnevanq, and Khuchap. The fifth, the Kirants monastery, is in the Tavush region. The Armenian Apostolic Church supports its Georgian counterpart’s request for official status, but Armenian church leaders object to handing over the monasteries.

In fact, the president of Georgia does not have any executive functions. All executive powers belong to the government. In this respect, the attitude of the government members to the issue is rather interesting. Foreign Minister David Zalkaliani said: “Azerbaijan is a strategic partner of Georgia and we are cautious about this because the issue of Mount Keshikchi is sensitive”. According to him, the commission on delimitation of the border between Georgia and Azerbaijan will resume its activities in the near future. Zalkaliani said that he had been in constant contact with his Azerbaijani counterpart on the issue: "We have agreed with Azerbaijan on the renewal of the commission ".

Members of the Civic Movement "Russia Invader" held a rally at the building of the Georgian Parliament demanding Zourabichvili's impeachment under the slogan "Red card to the President!". They said that the recent statement of the president seriously damaged the image of the country. Even if this action is not about the matter, it reflects the attitude of the Georgian public towards SalomeZourabichvili's steps. The organizers emphasized that the last statement of the president was against the state and coincided with Russia's aggressive policy. Notably, Zourabichvili  said she was against the creation of a US military base in Georgia, since it “will be perceived as a provocation.”

Finally, Georgia's embrace to Armenian separatists living in the occupied region does not make Salome Zurabishvili look good. In February 2019, 12 athletes from the occupied lands of Azerbaijan, along with Russian and Turkish athletes, participated in the USU International Open Karate Championship 2019 in this country. Such a behavior of Georgia which suffered occupation of a part of its lands is not reasonable. Or did they agree with the loss of official lands? It could be their own business but the position they hold only in terms of international relations is important to Azerbaijan.

In any case, the Georgian President's statement against Azerbaijan, the Armenian territorial claim have roots. Zourabichvili was born in France on March 18, 1952. She worked in the French Foreign Ministry in 1974-2004. She was Head of the Division of International and Strategic Issues of National Defence General Secretariat of France in 2001–2003. She was appointed the Ambassador of France to Georgia in 2003. In 2004 President Mikhail Saakashvili of Georgia nominated her as Minister of Foreign Affairs in his new government. Zourabichvili was sacked by Prime Minister Zurab Nogaideli late on 19 October 2005 after a series of disputes with members of Parliament. In November 2005, Zourabichvili set up the organization 'Salomé Zourabichvili’s Movement'. However, being anti-Russian does not justify her to claim Azerbaijani lands, or controversial lands between the two countries. Finally, when looking at the path of her life, Armenian traces appear in raising Salome Zourabichvili as a political figure. Supporting Armenians and their fictitious history is part of France's strategy. The current president of Georgia worked in France's Strategic Planning Center. It can be assumed that her education played a great role in shaping her love to Armenia from young age. Therefore, her behavior towards Azerbaijan is predictable.