Expectations of the meeting Merkel-Hollande-Putin - OPINION 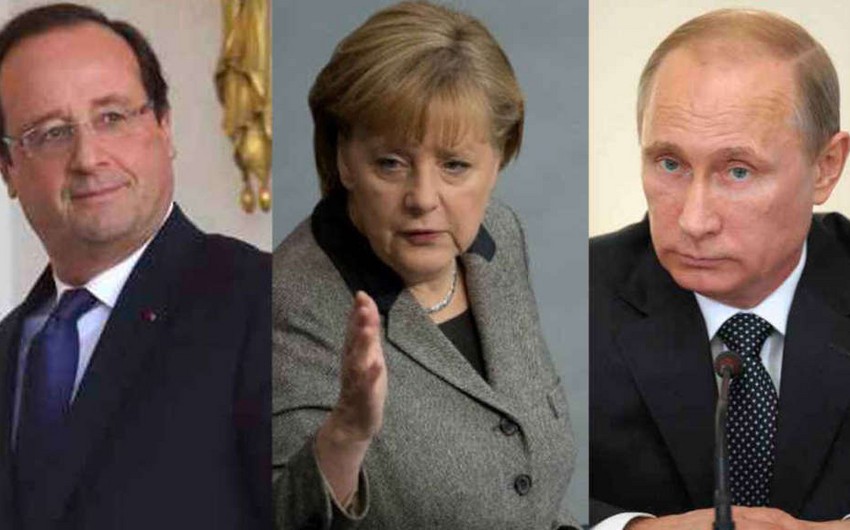 Report informs referring to foreign media, they will discuss with Russian President Vladimir Putin the situation in Ukraine.

Yesterday the situation in Ukraine was the main topic of the three meetings.

Discussions were held at the meeting of defense ministers of NATO member countries, during a visit to Kiev Secretary of State John Kerry, as well as German Chancellor Angela Merkel and French President Francois Hollande.

As a result of the meeting 12 items of Minsk protocol, which signed on 5 September last year with the participation of Russia and the OSCE were updated.

The protocol includes provisions for the territorial integrity of Ukraine and the exchange of prisoners.

Before bringing the assumptions concerning the Moscow meeting, we want to touch on some points regarding the results of the meeting held on February 5, NATO.

NATO Secretary General Jens Stoltenberg said that for the aim of security of Eastern Europe the size of the Response Forces will be increased from 13 thousand to 30 thousand. These forces will be deployed at the border with Ukraine and Russia countries - the Baltic States, Poland, Bulgaria, Romania.

Although NATO spokesman assured that they don't see a direct threat to Russia, nevertheless strengthening its presence in these regions of the alliance is a response to "the behavior of Russia" in Eastern Europe.

Events in Ukraine are important from the standpoint of safety in the world. Moscow's position on this issue has an effect on other "hot spots" in some regions.

Visit to Moscow the leaders of the European Union is very important because of the political burden.

Since the beginning of the processes in Ukraine in February last year the West, also Moscow made statements to ensure its security.

Over the last year the parties have not yet taken serious steps in the field of security cooperation of the parties. On the contrary, the tense situation in the east of Ukraine is growing every day.

Moscow had been working on the Russification of the Crimea.

It is possible that the security issue will become a leading also during the visit.

Document taken by Merkel and Hollande in Moscow, conventionally referred to as "updated Minsk agreement."

On the eve of visit to Russia European leaders would like to draw attention to one question. US has not yet appear active in solving the Ukrainian problem. It is true that this country is included in the membership of the OSCE. However, as an intermediary often acts EU. Europeans still have not been able to achieve the desired results in ensuring the territorial integrity of Ukraine.

Based on the statements of Russian officials and originating in eastern Ukraine processes, we can say that Moscow doesn't intend to retreat from its position in solving this problem.

From this point of view we can make some assumptions about the results carried out in such conditions Moscow meeting:

-As representatives of the West European leaders will require Russia to recognize the territorial integrity of Ukraine, to bring the separatists in the east of the country, to suspend the supply of Russian forces of weapons and other military equipment;

-Of course, the negotiations will affect the fight against terrorism, including the situation in Syria, the activities of the ISIS;

-Europeans will bring to the attention of the Kremlin officials question of the application of new sanctions, the possibility of excluding Russia from the international financial network SWIFT, etc.

-Although she claims that supports the policy of the West in the fight against terrorism, will defend the power of Bashar al-Assad in Syria, and accuse the opposite effect in the chaos in the country;

-Russia said that the security of the country puts above problems encountered in the application of sanctions.

Thus, if the meeting between Merkel, Hollande and Putin will not give the desired result, the Moscow visit of Europeans can be considered as a warning regarding future in the long term more serious steps against Russia.