Crisis of democracy in France - Macron is looking for culprit - COMMENT 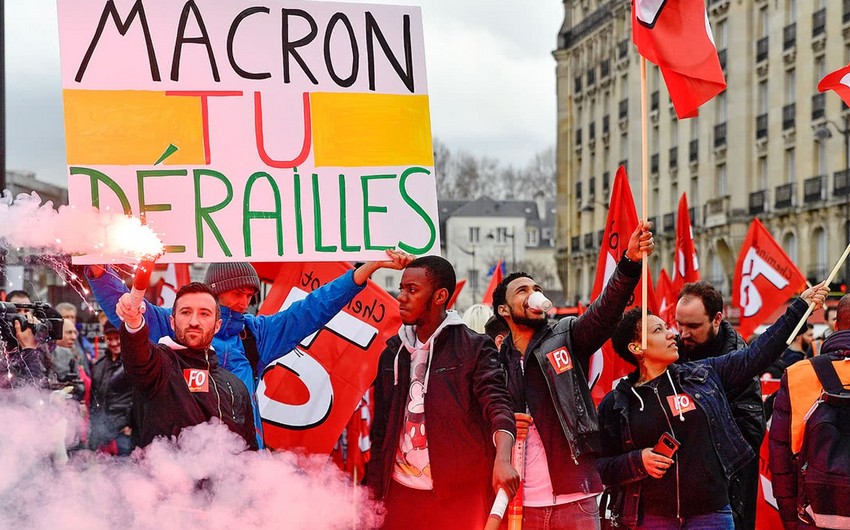 Baku. 12 December. REPORT.AZ/ France is often regarded as the cradle of modern democracy and ideas of freedom. It is one of the five permanent members of the UN Security Council. This country is one of the states that have the right to impose veto on conflicts around the world, as well as global issues. In other words, France is one of the five states out of 194 UN members that has the authority to influence the lives of 7 billion 591 million people across the world. In terms of such issues, the events in France are also in the focus of the international community.

Unfortunately, Yellow vest movement in a country which promotes freedom of expression as a human rights defender and holds a flag in favor of democratic values is not highlighted widely.

Authorities are trying to understate the number of protest demonstrators as much as possible. For example, on December 8, 1,500 people were reported to have taken part in the protest. According to the official figures, 89,000 police were involved, including 8,000 in Paris, to ensure public order. It is possible to assume that the employees of other state agencies responsible for security are also involved in this operation. Apparently, higher fuel prices is not the main reason for rally. The matter is much more serious. “Measures announced by President Emmanuel Macron to appease a wave of protests across France will cost between 8-10 billion euros ($9.1-$11.4 billion)”, a junior minister for public accounts Olivier Dussopt said on Monday. This also means that France needs reform in all areas. However, there is a lack of funding to implement this process. Who will pay for the implementation of the reform? The thing is that the government under the name of reforms has undertaken certain obligations with regard to tycoons. Now the country can not fulfill those promises. It sought to resolve this issue by raising fuel prices. As a result, they used force against protesters to fulfill the commitment. As if all this were not enough, Emmanuel Macron has declared a state of emergency in the country on December 10. He noted that the problems of the country existed for a long time.

The roots of problems go back to 40 years ago, and now they "take to the streets". But what measures did Macron's government take to improve the social well-being of the population last year? If steps were taken in this direction, then the protesters would not have put forward a requirement of 25 items before the current government. The president has promised citizens to increase the minimum wage from 2019 by up to EUR 100. By the way, the President of France stressed that he would not receive rally participants. He attended the G-20 summit in Argentina from November 30 to December 1. The fact that Argentine officials did not meet French President Emmanuel Macron and his spouse Brigitte upon arrival in Buenos Aires can be called the irony of fate. By some misunderstanding Macron and the first lady of France were welcomed only by an airport employee wearing a uniform. The heads of the world's leading states postpone all foreign visits in such cases. Emmanuel Macron apparently did not want to accept the seriousness of the protests in the country, or because he was ignorant about the case, the situation had further aggravated.

On December 10, he met with 30-40 people representing trade unions and political parties at the Élysée Palace. The president's speech and his steps have already been criticized in the country. The First Deputy Chairman of the Republican Party of France, stressed that Emmanuel Macron did not say how he would address the crisis in his appeal before the nation. "The French President actually denied all of his previous political course and acted as anti-Macron".

Notably, the state of emergency in France was declared on November 13, 2015. A terrorist act was committed in Paris on that day. As a result of this crime, 132 people were killed and more than 350 were injured. Emmanuel Macron was elected the president at that time. The first round of presidential elections in France was held on April 23, 2017. He beat the opposition candidate Marine Le Pen on May 7 in the second round and became the president. The state of emergency was lifted on November 1, 2017. There are, however, many issues to be discussed regarding conduction of elections under the state of emergency.

Meanwhile, we want to brief with what Turkish President Recep Tayyip Erdoğan said at the event titled "Culture of Humanity" and "Hope for Humanity: Turkey": "You have raised the world in Gezi events. Now do the same thing. But they did not do the same, they did not cover the events, protests in France, the Netherlands. Since they are not sincere and honest," Erdoğan said.

He noted that today, those, who say Turkey has no democracy and freedom, are facing the trial: "No one can teach democracy to Turkey. The inner face of Europe that it hides under the mask of culture has already been exposed."

Trump has tweeted twice on the issue, saying in one tweet this weekend that “the Paris agreement isn’t working out so well for Paris.” It was a reference to the 2015 Paris climate accord, which the U.S. is leaving and which Macron has championed worldwide.

“Very sad day & night in Paris. Maybe it’s time to end the ridiculous and extremely expensive Paris Agreement and return money back to the people in the form of lower taxes? The U.S. was way ahead of the curve on that and the only major country where emissions went down last year!” Trump tweeted.

Unfortunately, international human rights organizations, as well as members of the , did not comment on protests in France that claimed numerous lives.

There are four UN Security Council resolutions on the liberation of Azerbaijani lands. Until now, five permanent members of the organization, including France, never mentioned this issue. As an international mediator, France failed to fulfill its obligations for the liberation of Azerbaijani lands from occupation. As if all this were not enough, the French government, as a rule, was always by invador Armenia;s side. Officials of OSCE Minsk Group co-chair countries during their visit to the South Caucasus also visit Azerbaijan apart from Armenia and Georgia. It was taken into account during the term of former French presidents Nicolas Sarkozy and François Hollande. But, apparently, Emmanuel Macron had forgotten his country’s mission in the South Caucasus, during his visit to Yerevan in autumn this year. During his meetings in Armenia,  he gave promises to Armenians about "genocide". Thus, he could not lead  his country's approach to the settlement of the Nagorno-Karabakh conflict.

Finally, touching upon one issue one can characterize existing political, economic and social status of France.

French comedy film Fantomas was shot in 1964. The film was dubbed in 1967 in the USSR. It was one of the most popular foreign films in Azerbaijan in the 1970s. Fantomas is standing in the root of all the troubles in France. Who is he? He is an alien. The creators of the film have presented the Fantomas as a scapegoat. Ironically, however, they emphasized that the responsibility of what happened in the country lies not on Charles de Gaulle but Fantomas.

Protests on November 17 proved that democracy is facing crisis in France. It has been confirmed that there is a need for serious reforms in the country. Emmanuel Macron, however, said that that "the roots of problems went back 40 years" announcing Fantomas as a scapegoat. But who is his Fantomas? Georges Jean Raymond Pompidou, President of France from June 20, 1969 to April 2, 1974, or Valéry Giscard d'Estaing who led France from May 27, 1974 to May 21, 1981?