Conditions for liberation of Karabakh 'ripening' - expectations from year 2019 - COMMENT 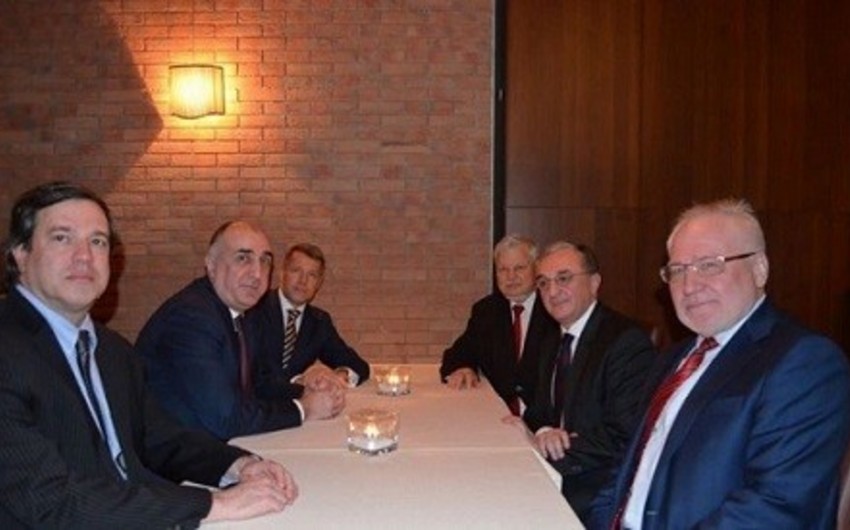 Baku. 14 December. REPORT.AZ/ Azerbaijan continues its struggle to liberate its lands from occupation. It is hoped that the work of international mediators will produce a positive effect. Thus, on December 6, Minsk Group co-chairing countries, Azerbaijani Foreign Minister and acting Armenian Foreign Minister Zohrab Mnatsakanyan agreed to continue the work on a just and lasting peace settlement of the Nagorno-Karabakh conflict. The Co-chair countries  commended a considerable reduction in the number of the ceasefire violation cases. They appealed to the President of Azerbaijan and Prime Minister of Armenia Nikol Pashinyan at the CIS summit in Dushanbe in September urging them to continue the implementation of agreements reached within the framework of talks and to take concrete measures to prepare their public to peace. The Co-Chairs expressed their hope that in the near future, the Azerbaijani and Armenian leader would resume an intensive dialogue aimed at achieving concrete results for the fair and lasting settlement of the conflict. The Foreign ministers of Azerbaijan and Armenia also expressed their satisfaction with the optimistic statement of the co-chairs. In any case, the overthrow of Serzh Sargsyan and Robert Kocharyan couple, who were involved directly in the occupation of Karabakh and the Khojaly genocide, raises hopes that new political forces would be more realistic. Because Sargsyan and Kocharyan came to power in Armenia after shedding blood in Karabakh. As if all this were not enough, on March 1, 2008, the couple shed the blood of their own nation in Yerevan. In other words, their presidency was watered with blood. Thus, it is likely that new political forces will learn lessons from what has happened.

Speaking at the event in the National Olympic Committee on the sportive results of 2018, President of Azerbaijan, President of National Olympic Committee Ilham Aliyev said: “As you know, very serious changes have taken place in Armenia this year. The criminal junta regime, which illegally seized the power for twenty years, has collapsed and the Armenian people now say what we always said. The criminal and corrupted regime has been exploiting its own people for over 20 years and the bitter end of the regime is perfectly logical. I must also say that our consistent, purposeful policy has played irs role in crushing the criminal junta regime. Because our policy remains unchanged. As long as our land is under occupation, we will use all means to keep Armenia isolated and we have achieved it." The President stressed the global energy and transport projects that have been initiated by Azerbaijan and noted that transport has bypassed  Armenia and touched upon the damage to Armenia: "As a result of our policy, Armenia is experiencing a demographic crisis, people are massively leaving the country, there is no basis for economic development, no foreign investment, and their access to international markets has become very difficult. We have proved in the international arena that we are the right side in the Armenian-Azerbaijani Nagorno-Karabakh conflict. That is, all these and other factors, of course, our military might have put Armenia in such a difficult situation."  The head of state also spoke about the heavy economic and social situation in Armenia. "That is what happened in our neighborhood. Of course, I think that today there is a more favorable situation for the settlement of the Armenian-Azerbaijani Nagorno-Karabakh conflict."

"There are several factors that confirm this. Of course, first of all, it is a change of a bloody regime in Armenia.

"In April 2016 battles, the Azerbaijani side proved its capability of fighting and liberating its lands, both to international mediators and to Armenia. Therefore, it is possible to suppose that the new political forces in Armenia do not want Armenian soldiers to die as aggressors on the lands of another state. The only way out for them is to get out of the occupied lands. In any case, the OSCE Minsk Group co-chairs, particularly the United States and Russia, have been diplomatically active in solving the current issue. The former US ambassador to Yerevan, Richard Mills, stresses the importance of Armenia's withdrawal from the occupied lands, and Moscow's strong statements on Yerevan increase the optimism about the liberation of lands from occupation next year. It is not a secret that Russia plays the main role in the occupation of Karabakh. Thus, the current relations between Azerbaijan with Russia are remarkable. The unofficial summit of the Commonwealth of Independent States (CIS) in St. Petersburg has clarified some of Russia's attitudes towards Azerbaijan. Thus, during the meeting between President Ilham Aliyev and  Sergey Lavrov on December 14 it was indicated that 2018 was a very productive year for the development of relations between the two countries.

They also expressed hope that the parties will give a new impetus to the settlement of the Armenian-Azerbaijani Nagorno-Karabakh conflict in 2019. It was noted that Azerbaijan and Russia actively cooperate within international structures. By the way, there are facts confirming the development of relations between the two countries. This is evidenced by Russian President Vladimir Putin's visit to Azerbaijan 4 times over the past five years. Notably, 16 documents were signed between the parties during the visit of President Ilham Aliyev to Sochi during the visit of President Ilham Aliyev to Sochi. Last year, the trade turnover between Azerbaijan and Russia grew by almost 35 percent to reach $ 2.5 billion. Based on the outcomes of the Sochi talks, the approved 5 "roadmap" on different sectors of economic cooperation will further boost trade turnover, intensify relations of integration. The cost of military products from Russia exceeded $5billion. Let's hope that this year will be successful in untying the Karabakh knot in 2019. Azerbaijan's development of bilateral relations with the co-chairing countries, the events taking place in the world, the positions of the co-chairing states can help resolve the Karabakh knot and liberate occupied territories of Azerbaijan.