April battles: First stage of liberation of Karabakh from occupation - COMMENT These battles revealed power of Azerbaijan army, weakness and incapacity of the enemy
208 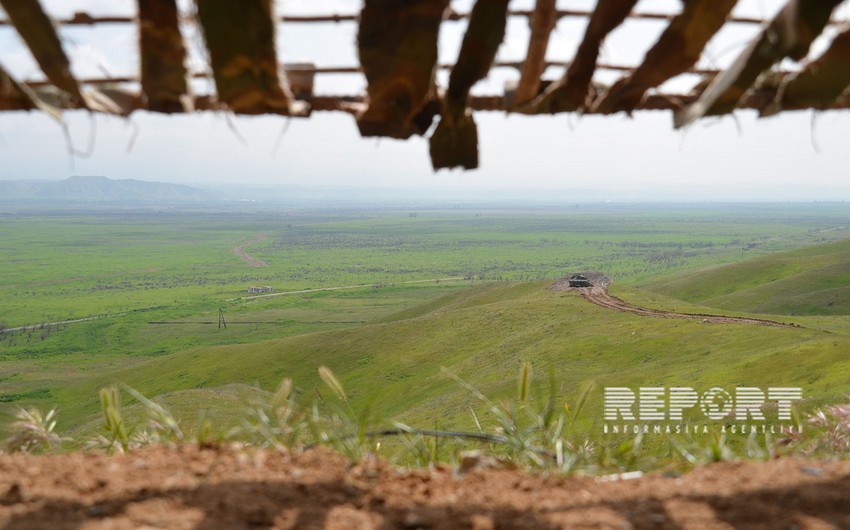 Baku. 1 April. REPORT.AZ/ Territorial integrity of Azerbaijan has been violated, its lands are kept under occupation by Armenia supported by international powers. Last year’s April clashes once again showed to the aggressor and its big bosses that the Nagorno-Karabakh is territory of Azerbaijani.

Our nation and friends of our country fully defended action taken by official Baku to recapture its lands. United position of political parties, public organizations, youth, large sections of the society and their support to military operations, mass actions in various parts of the country and allied nations for the support of Azerbaijan army give ground for this thought.

However, what happened on the frontline? Azerbaijan defense ministry informed that on April 2 Armenian armed forces subjected positions of Azerbaijan army to intensive fire from heavy weapons across frontline, attempted provocation and moves.

Statement of Azerbaijan defense ministry underlined violation of obligations by Armenia and exposure of civilians and residential areas to shelling attack.

Meeting with the group of servicemen on the anniversary of April victory of Azerbaijan army, President of Azerbaijan, Supreme Commander-in-Chief Ilham Aliyev told: “The April battles are our glorious military victory, a victory that demonstrates the might of our state, people and army. The Azerbaijani flag flies on the territories of Fizuli, Jabrayil and Agdara districts which have been liberated from occupation as a result of the April battles. These battles testify that the Azerbaijani people and state will never put up with the occupation and will restore the territorial integrity of our country at any cost”.

Head of state also noted that April clashes also demonstrated professionalism of our armed forces: “After a counteroffensive operation launched from an unfavorable position, our army took over strategic positions. Today, these strategic heights and positions liberated from occupation allow us the opportunity to fully control the situation on the contact line and take the necessary measures”.

President noted that the April fighting should be included in military textbooks. Both from the point of view of professionalism and the patriotic spirit, the April fighting showed again that the Azerbaijanis are a heroic people: “They have once again demonstrated that we will not accept this situation. They have shown that the unity of the people and government is provided in Azerbaijan at a high level and is getting ever stronger”.

However double standards that Azerbaijan faces during 20 years were in place also with regard to April clashes. OSCE Minsk group cochairmen, who haven’t reached any positive achievement as mediators between Baku and Erevan for peaceful resolution of Nagorno-Karabakh conflict, didn’t keep themselves from putting pressure on Azerbaijan. The issue is that even during period of clashes mediators didn’t call Armenia to withdraw its occupation forces from Azerbaijani lands. Their statements equated aggressor with victim under the title “sides”, calling to stop military operations.

OSCE also expressed “serious concern” about wide violation of ceasefire. Then cochairmen of the organization James Warlick (USA), Pier Andrieu (France) and Andrey Popov (Russia, still holds this position) made statement on escalation on contact line. The cochairmen were calling the sides to stop fire and to take necessary action to stabilize situation on the front line.

They noted that there is no alternative to peaceful settlement of the conflict and that the war doesn’t provide a resolution”.

Former US Secretary of State John Kerry in his statement invited the sides to follow ceasefire regime and to be tolerant and don’t allow escalation.

With successful April battles Azerbaijan proved its capability to liberate its lands from occupation and showed it to everybody. However, the mediators instead of putting efforts to restore territorial integrity of Azerbaijan, make statements for restoration of ceasefire and peaceful resolution of the problem.

Not a single piece of land has been liberated from occupation as a result of these negotiations. Whereas, April battles revealed possibility of recapturing our lands through military operations.

April clashes also disclosed powers standing behind Armenian army. This also unmasked aggressor and those who are interested to keep current situation.

Those events laid bare Armenian army. Country’s defense minister and other military officers were fired for their disability. It was clear that Ohanian and others are simply scapegoats for their bosses.

By the way, elections to Armenian parliament were held on April 2. Seyran Ohanian having been one of candidates was criticizing the government, member of which he used to be during 8 years.

Russia supplied to Armenia “Iskander” ballistic missile complex. Nowadays Armenian president Serj Sargsyan threatens Azerbaijan with that weapon. Deputy chairman of the parliament told that they will not hesitate to use this missile “to protect Nagorno-Karabakh from Azerbaijan”.

Russia put significant efforts during last year to preserve its position in Armenia. They imposed head of “Gazprom Armenia” as Armenian prime minister.

Although Moscow tried to prove or demonstrate through negotiations with official Baku that it keeps impartial attitude towards both Armenia and Azerbaijan, it seems that they could not succeed. Because Moscow took no action after provision of “Iskanders” and open threats of Sargsyan.

April battles have proved the following:

- International mediators cannot force occupier to leave the territories, or do not want to do it;

- International mediators do not mention the issue of territorial integrity of Azerbaijan in their statements;

- Powers that help Armenia in occupation of Azerbaijani lands could not hide themselves;

- It was approved that lands will not be liberated through negotiations in the near future;

- It was confirmed once again that the General sponsor of Armenia is not a single country.

is inevitable. In other words, April battles would lead to new fights.