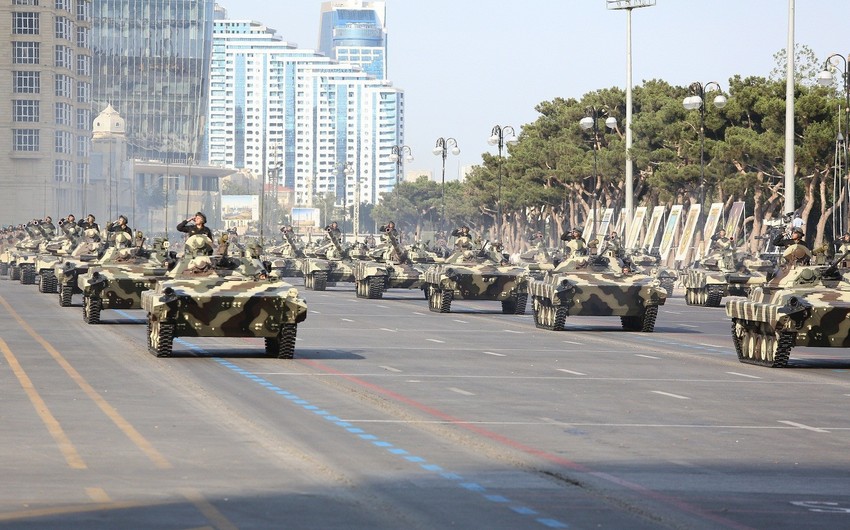 Over the past years Azerbaijan has strongly increased its military might, which is admitted not only by its partners, allies and international war experts, but also Armenia itself that has been trying to balance Azerbaijan's military growth through recent arms purchase. Certainly, it is related not only to the priority task of ensuring national interests and state borders of Azerbaijan but also the restoration of territorial integrity, since for already more than 25 years the country has been suffering from the separatist actions of Armenia and occupational regime in Nagorno-Karabakh.

Azerbaijan repeatedly announced its intentions to resolve the Nagorno-Karabakh issue peacefully, that is by way of talks, but it always reserved the right to use force to return its lands.

As President of Azerbaijan Ilham Aliyev said earlier, Azerbaijani army 'gives and will give a decent response to the enemy, like it was during the 2016 April battle, when part of Azerbaijani lands was liberated, or in May 2018, when as a result of a successful operation in Nakhchivan direction, a large territory came under our control."

According to the head of state, Azerbaijan is carrying out a consistent policy towards modernization and equipment of Azerbaijani army for its strengthening. "We intend to further allocate large amounts and multiply the combat readiness," the president of Azerbaijan added. President Aliyev said that the Armenian army is today unable to compete Azerbaijan, since it is now in a hard state.

"Naturally, the military modernization of Azerbaijan is among the most dynamic in the area of the former USSR. It is quite comparable with the modernization of the Russian army and, to some extent, with the army of Kazakhstan. As we know, this process acquired the highest dynamics in the mid-2000s. It is possible to say not without vanity that the modern army of Azerbaijan and the Azerbaijani army 15 years ago are technically quite different armies," the Russian war expert, editor of the 'Eksport voorujeniy' magazine Andrey Frolov said.

"Armenia is trying to balance the military construction of Azerbaijan, which is evidenced by the recent contract with Russia."

He said that Azerbaijani army had experienced cardinal modernization that could not but affect the changes in the balance of powers in the region.

"Armenia is trying to balance the military construction of Azerbaijan, which is evidenced by the recent contract with Russia. But, to my mind, they will be unable to fully compensate for the dynamics acquired by Azerbaijan, especially in part of the assault equipment," the Russian expert added.

On his part, another Russian political expert Yevgeni Mikhailov believes that the recent military reforms in Azerbaijan put the Azerbaijani army on the same level with the strongest armies not only in the region but also across the world.

"The conducted military drills of both defensive and offensive nature show that army equipment and training are on the highest level," the expert noted.

Notably, Azerbaijan systematically conducts large-scale military drills. Of the latest: in mid-March the Azerbaijani armed forces held the stage of combat shooting as part of the drills.

"The recent military reforms in Azerbaijan put the Azerbaijani army on the same level with the strongest armies not only in the region but also across the world."

Mikhailov also believes that the purchase of modern arms in both Russia and other countries strengthen the military might of Azerbaijan. This confuses Armenia that 'tries to beg for loans to buy new weapons'.

"The return of a part of lands in 2018 in the area of Nakhchivan also testifies to the combat readiness of the Azerbaijani army. There is no doubt that had the troops not been stopped, we would have lived in a new regional reality. Only the interference of the diplomatic forces of the third countries helped Armenia to preserve its imaginery statehood," he said.

Notably, earlier Azerbaijan ranked 23rd for the volume of arms import for 2014-2018, in line with the data issued by the Stockholm International Peace Research Institute (SIPRI). Under the same survey, Russia was the main arms supplier to Azerbaijan in the indicated period (51%), followed by Israel on the second place with 43% and Turkey on the third place (2.8%).

Azerbaijan will continue to expand the purchase of modern shooting riflts, military and armored equipment for protection of its borders and restoration of territorial integrity.