10 remarks on first 100 days of Trump's presidency - COMMENT Washington didn’t change relations with Russia and Iran, used power in Syria, tension with N.Korea on the brink of war
636 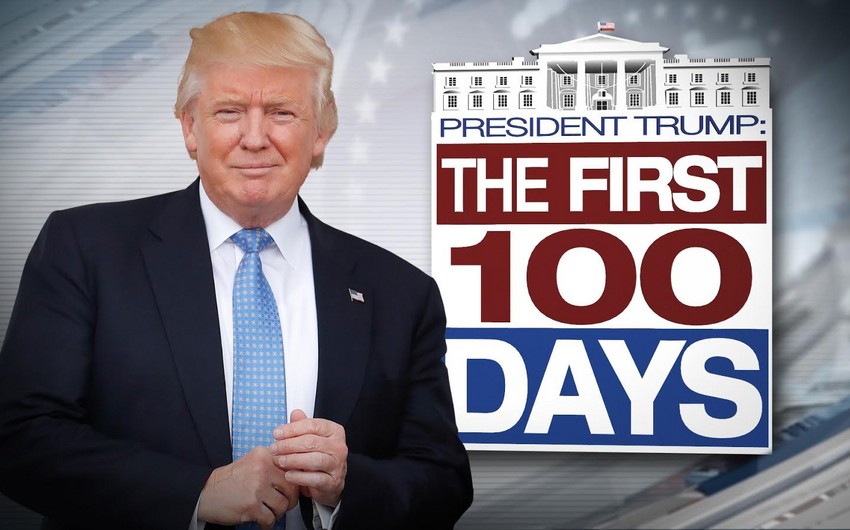 Opinion poll held by Washington Post and ABC News revealed that 96 percent of voters don’t regret that they elected Donald Trump as president. Only 2 percent of respondents expressed regret for their votes for him.

According to another survey by pro-liberal website Politico and Morning Consult, 16 percent of Republicans marked Trump’s presidency - A, 23 percent - B, while 13 percent of Democrats marked - A, 24 percent - D after three months in office.

We would like to underline 10 remarks related to 100 days of Donald Trump’s presidency:

- Last year many people were expecting Trump to soften relations with Russia and ease the tension in relations with Moscow climbed under former president Barack Obama. Frankly speaking, there were enough reasons for such forecast. Because during presidential campaign Kremlin propaganda machine was working against Trump’s opponent, former secretary of state Hillary Clinton, giving preference to current president among candidates. That’s why those in Moscow were expecting alleviation of US sanctions against Russia. But beyond all expectations, this didn’t happen. Despite efforts of Russian officials and mass media propaganda, Trump hasn’t yet given a smile to Russia. Statement of US Secretary of State Rex Tillerson after his visit to Russia meaning that nothing was solved in Moscow visit, gives enough ground to say that relations between two countries remain as strained as used to be.

- It also clear that there is no sign of mitigation in relations with Azerbaijan’s neighbor Iran, and that the US will take even harsher position against government of this country. Trump expressed intention to revise Joint Comprehensive Plan of Action signed in July 2015 between Iran and six countries and told that Tehran sponsors international terrorism.

- For the first time since beginning of anti-terror operations in Syria on April 7 the US launched Tomahawk long range missiles from warships on Mediterranean to Shayrat pro-Assad military base located in Syrian province Homs. By this Trump stated that he will follow his own line in Syrian conflict.

- While talks over Afghanistan were underway, the US launched air strikes on Achin District of Nangarhar Province for the first time using the most powerful non-nuclear bomb – GBU-43. Pentagon confirmed that this was the most powerful non-nuclear bomb used so far. Pentagon named the bomb with the weight 9.5 tons “Mother of All Bombs”. This is the first step of 45th US president in Afghanistan and can be regarded as a fact revealing future strategy.

- On the same day when Tomahawks hit Syria, President of the People's Republic of China Xi Jinping was in US with visit. Bilateral relations, trade imbalance, Taiwan issue, dispute around South Chinese Sea and North Korea’s nuclear problem were main topics of discussion. After this visit China stated that it will pose sanctions against North Korea if it holds a nuclear test.

- During the first 100 days of Donald Trump's presidency, tensions between North Korea is on the brink of war. This tension means 6 countries - the US, Russia, Japan, China, South Korea and North Korea are likely to participate in the war.

- During the presidency of Barack Obama, there was a certain coldness between the US and Saudi Arabia. Appointment of Prince Khaled bin Salman as the new ambassador to Washington, Trump’s meeting with Crown Prince and Defense Minister Mohammed bin Salman Al-Saud as well as the US President's plan to visit Saudi Arabia during his visit to the Middle East in the near future shows that the alliance between the two countries will continue. It is also considered to be an indicator that the White House will further develop relations with the kingdom.

- Before the election, the European Union worried that Donald Trump will change the course of US foreign policy and did not hide fears. However, his recent speeches and statements on Syria, Afghanistan and Russia have made EU comfortable.

- Trump’s migration policy is differing from policies of former US presidents by its severity.Trump's executive order from the previous evening - which suspends the U.S. refugee program for 120 days, bans all immigrants from seven Muslim countries (Syria, Iran, Iraq, Libya, Somalia, Yemen and Sudan) for 90 days, and orders the administration to develop "extreme vetting" measures.

- US attitude towards Azerbaijan has not changed. On the occasion of the 25th anniversary of the establishment of diplomatic relations between the Republic of Azerbaijan and the United States, US Secretary of State Rex Tillerson in a letter to Foreign Minister Elmar Mammadyarov emphasized that White House has close cooperation with Azerbaijan especially, in the energy sector. He said that US supports efforts to increase economic opportunities and diversification of Azerbaijan's economy.

According to the US Ambassador to Azerbaijan Robert F. Cekuta, Washington relies on the support of Baku in the prevention of unacceptable behavior of Bashar al-Assad.

We would like to end this article with Trump's message on his Twitter page from his 100-day speech: “Mainstream (FAKE) media refuses to state our long list of achievements, including 28 legislative signings, strong borders & great optimism!"

Addressing supporters at a rally Trump stated that his first 100-day of presidency was "very productive" noting that in all cases they will win and expressed hope for "the great-great struggles".