State Tourism Agency: Development and promotion of tourism in occupied territories are unacceptable

State Tourism Agency: Development and promotion of tourism in occupied territories are unacceptable Azerbaijan has raised the issue on Armenia’s provocations before the General Assembly of the World Tourism Organization 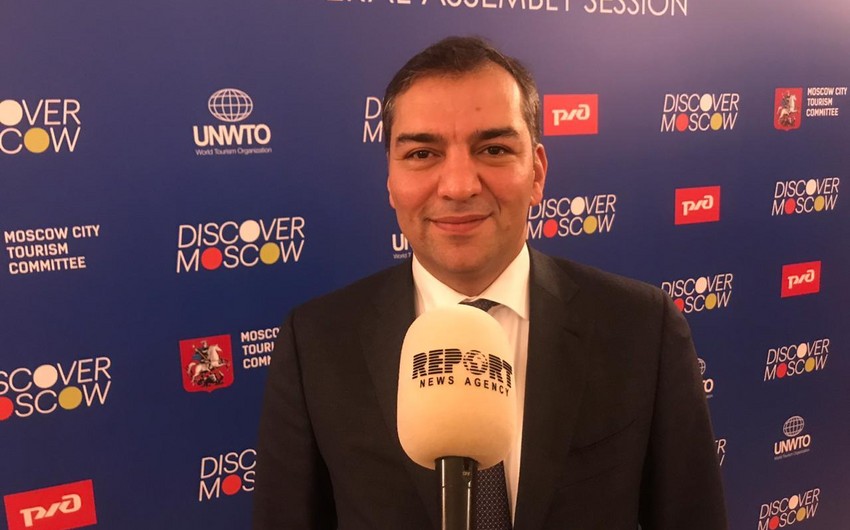 Head of State Tourism Agency Fuad Nagiyev’s interview with Report’s Moscow bureau in the 23rd Session of the General Assembly of the World Tourism Organization (UNWTO) that opened in Saint Petersburg, Russia.

Azerbaijan is also attending the 23rd Session of the General Assembly of the World Tourism Organization (UNWTO). How do you assess Azerbaijan’s participation in the event?

- First of all, I’d like to say that being member of the World Tourism Organization is very important for Azerbaijan. Because we give information about Azerbaijan in many international events, introduce Azerbaijan’s tourism potential. The goal is clear – involve tourists in Azerbaijan and develop tourism in the country.

- You stressed during your speech at the plenary meeting of the assembly that Azerbaijan is unable to fully demonstrate its tourism potential because of occupation of its lands. Is special attention paid to this issue?

- We raise this issue at almost all events. Because Azerbaijan often faces Armenia’s provocations in the international events. In turn, we prevent these provocations. I’d like to note that the WTO has Global Code of Ethics for Tourism. Within this Code, it was repeatedly noted that territorial integrity of other countries should be respected and no provocation should be allowed. We raise this question in the General Assembly and it was stressed that development and promotion of the occupied territories is unacceptable. This issue is very significant for Azerbaijan. We believe that this problem will be solved soon.

- Can you please inform us about bilateral meetings and results achieved in the 23rd Session of the WTO General Assembly?

- During the visit, a number of bilateral meetings were held. As you know, ministers from 65 countries participate in the meeting. Taking advantage of this opportunity, we gave detailed information about Azerbaijan’s tourism potential. Our main meeting was held with Zarina Doguzova, Head of the Federal Agency for Tourism of Russia and held wide discussions.

We also exchanged opinions with Zurab Pololikashvili, Secretary-General of the World Tourism Organization (UNWTO), on Azerbaijan’s tourism potential. Participation in such international events is experience for Azerbaijan, involvement of tourists in the country and familiarization with the innovative technologies.