Gianluca Vacchi: I'm waiting for you in Baku for Shopping Festival, Saturday May 6 for my DJ set!

Gianluca Vacchi: I'm waiting for you in Baku for Shopping Festival, Saturday May 6 for my DJ set! Gianluca Vacchi will perform a DJ program at Elektra Hall
215 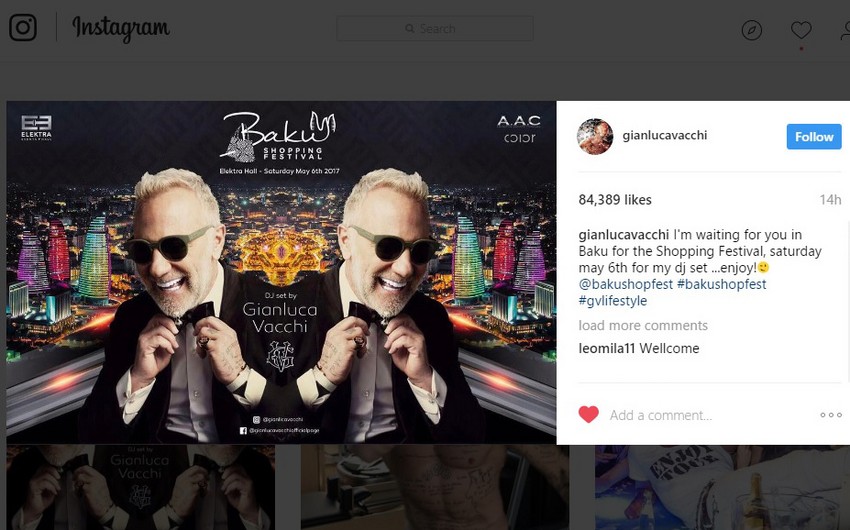 Baku. 2 May. REPORT.AZ/ The guest of honor of the first Baku Shopping Festival, Italian businessman and philanthropist Gianluca Vacchi, known as social network star, "dancing millionaire", has posted on Instagram announcement of a visit to the Azerbaijani capital, Report informs.

"I'm waiting for you in Baku for the Shopping Festival, Saturday May 6th for my dj set ...enjoy!", Vacchi posted.

Gianluca Vacchi will perform a DJ program at Elektra Hall.

Performance of Italian businessman and philanthropist Gianluca Vacchi in the framework of the Baku Shopping Festival, whose videos get record number of views on social networks, famous for lively dances, travel and luxurious way of life, will be a great gift for his Baku fans and guests of the city.

Tickets can be purchased at the Elektra Hall ticket office, or order delivery by phone at 050-501-00-80.

The Baku Shopping Festival is being held from April 10 to May 10. Organizer of the Festival is the Azerbaijani Congress Bureau under the Ministry of Culture and Tourism. The festival is held twice a year and covers at once several areas: trade, tourism, entertainment, fashion and culture.

Within the framework of the Festival, numerous shopping centers of the city offer special discounts to the guests, trademarks of Azerbaijan and a number of foreign countries are presented on the large scale in the points of temporary trade. Azerbaijani citizens and foreign tourists can use Tax Free system when buying goods worth more than 100 AZN.

Information kiosks are installed in the center of the capital, in hotels and shopping centers, Call center operates from 08:00 until 00:30. Further information is available at the official website of the festival which operates in several languages.

The next festival will be held in October.