Turkey dedicates memorial to the officer, killing pro-coup general Opening of the monument will take place on August 30
189 Baku. 26 August. REPORT.AZ/ Turkey has set up a monument to ensign Ömer Halisdemir, who heroically died after shot of the Gülenist Terror Organization members during July 15 coup attempt.

Report informs citing the Turkish media, the monument was put up in Şehitler Parkı in Toroslar district, Mersin province.

According to the information, the monument was completed in 13 days. It is of 2.8 meters in height with pedestal, while only the statue is of 1.8 meters. Height of the whole complex is 4.6 meters.

Opening of the monument will take place on August 30.

The information states that Turkish Armed Forces ensign Ömer Halisdemir killed colonel general Semih Terzi, who was one of the pro-coups on July 15. After that he was killed by the FETÖ members, attempting a coup. 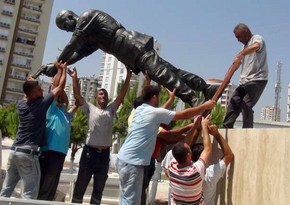