Ibrahim Kalın: "It's crucial to fight terrorism and Turkey has been doing its part in this regard"

Ibrahim Kalın: "It's crucial to fight terrorism and Turkey has been doing its part in this regard" He furthermore condemned the recent suicide attack at a park in Pakistan's Lahore and said it is a barbaric act
1788 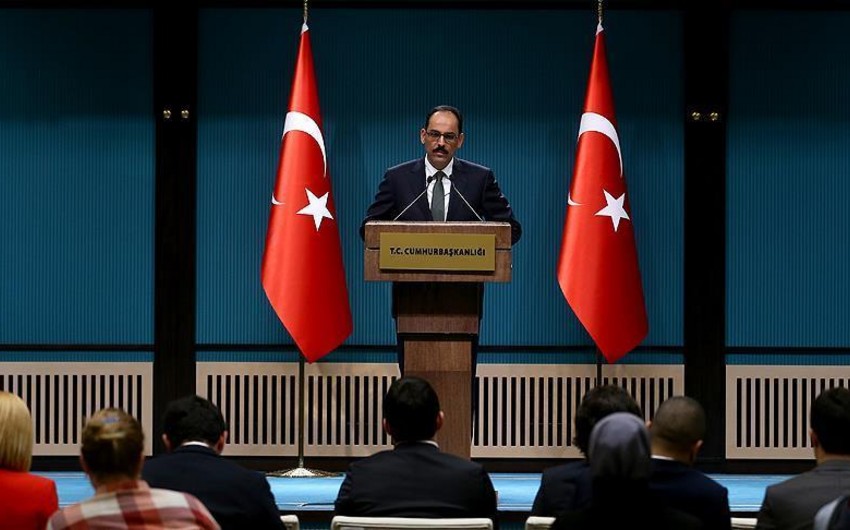 Baku. 28 March. REPORT.AZ/ Turkish Presidential Spokesperson İbrahim Kalın underscored on Monday that it is crucial to find a political solution to the Syrian crisis and preserve the country's territorial integrity in order to put a stop to the spread of terrorism, while he noted that Turkey continues to work against terrorists to ensure security at home and has caught terrorists and suicide bombers in recent weeks, Report informs referring to the Turkish media.

Speaking at a press conference in Ankara, Kalın said that the world should free itself from the Daesh terrorist organization and added that the terrorists have been fueled by the five-year long bloody war in Syria.

"Unfortunately, as long as the conflict in Syria prevails, terrorist organizations will continue to find space for themselves," Kalın said, and added that Turkey is in favor of a political transition that guarantees Syria's territorial integrity.

Kalın continued by saying that it is crucial to take a common stance against terrorism and that there is no difference between terrorists. He emphasized that the same way Daesh is condemned; the PKK terrorist organization must also be condemned with the same determination.

He also touched upon the security warning issued by Israel to its citizens, encouraging them to leave Turkey and said that such warnings are made by all countries including Turkey, which recently told citizens to avoid visiting Brussels after the terrorist attacks.

Kalın noted that it is crucial to fight terrorism to the smallest detail and Turkey has been doing its part in this regard:

"With the work of our Interior Ministry and the National Intelligence Organization (MİT), many terrorists and suicide bombers were caught," Kalın said, while he added that bomb-laden vehicles were also captured by security officials.

Kalın furthermore condemned the recent suicide attack at a park in Pakistan's Lahore and said it is a barbaric act.