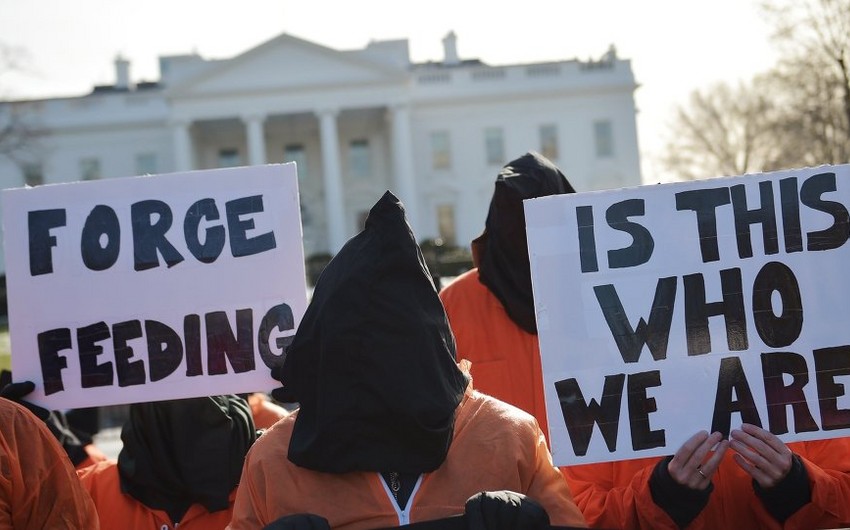 Baku. 12 January. REPORT.AZ/ Dozens of demonstrators gathered outside of the White House in Washington, DC on Sunday to remind US President Barack Obama, Department of Justice and Congress to fulfill the president's promise to close the Guantanamo Bay prison facility in Cuba.

"We're here to remind the President Barack Obama and the people of the United States and all over the world that this is a crime… we need to continue to demand the closure of Guantanamo," Organizer and member of Witness Against Torture Christopher Knestrick told Sputnik.

Sunday marked the 13th anniversary of the now 127 prisoners remaining at the Cuban facility.

Demonstrators, dressed in bright orange prison uniforms covered their faces with black hoods to show what the Guantanamo prisoners are required to wear every day.

Since November, the United States has released 28 Guantanamo detainees to countries including Afghanistan, Uruguay, Saudi Arabia, Slovakia and Kazakhstan, leaving 127 prisoners left at the detention facility, according to the Pentagon. Some have even remained at the prison for years despite having been cleared for release.

In 2009, President Obama signed an executive order to close Guantanamo Bay and described the detention facility as a "sad chapter in American history." However, the Cuban prison site remains open today.

The detention facility, located in Cuba, has been the subject of harsh criticism by human rights groups, governments and media since its establishment in 2002. Health workers, inspectors and former detainees have described the conditions at the camp as cruel and inhumane, and have reported numerous acts of torture.