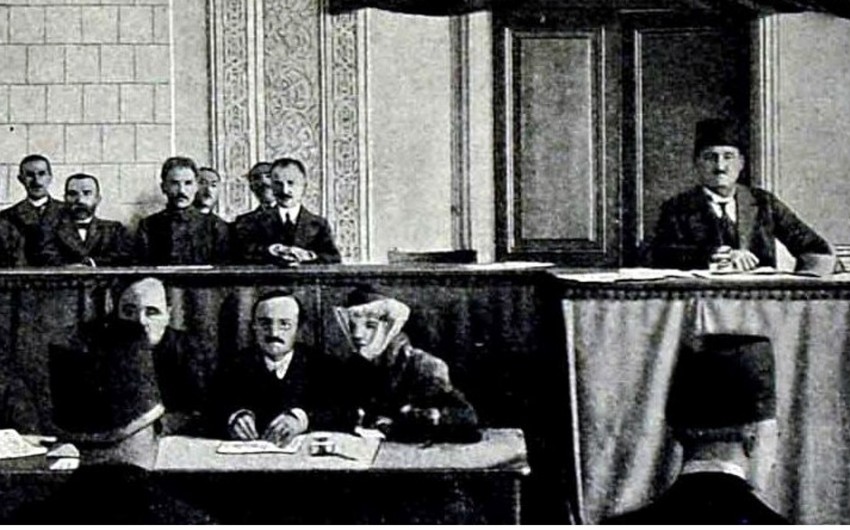 Today marks the 103rd anniversary of the formation of the parliament - the highest legislative body of the Azerbaijani Democratic Republic (ADR).

As Report informs on December 7, 1918, at 13:00, the first session of the Azerbaijani parliament commenced.

On May 28, 1918, the Muslim faction of the Trans-Caucasus Sejm proclaimed itself the National Council of Azerbaijan.

On September 17 of the same year, three months after the formation of the government of Azerbaijan under the leadership of Fatali Khan Khoyski, the government moved from Ganja to Baku.

On November 19, 1918, at a meeting of the National Council of Azerbaijan, chaired by Mammad Amin Rasulzada, a law on parliament was adopted, as well as a decree that all ethnicities living in the country should be represented in parliament. For every 24,000 voters, Muslims had to send 80 delegates, Armenians - 21, Russians - 10 delegates. Thus, it was decided to form the parliament in Azerbaijan consisting of 120 members. The members of parliament were endowed with parliamentary immunity.

On December 7, 1918, at 13:00 in the building of the former school for girls, owned by Haji Zeynalabdin Tagiyev on Nikolayevskaya Street (now the building of the Mahammad Fuzuli Institute of Manuscripts), the opening ceremony of the session of the Azerbaijani parliament took place. It was the first parliament in the entire Muslim Orient to be formed on the basis of democratic principles. At the opening of the parliamentary session, Chairman of the National Council of Azerbaijan Mammad Amin Rasulzada made a congratulatory speech. At the suggestion of the Musavat faction, Alimardan bay Topchibashov was elected the speaker of the parliament, and Hasan bay Agayev was elected first deputy chairman. At the first session of the parliament, the resignation of the government of Fatali khan Khoyski was accepted, and a decision was made to form a new government.

In 1918, the Ministry of Public Education was created, schools, gymnasiums, and girls' schools were opened. On September 1, 1919, the law “On the establishment of the Baku State University” was adopted. The Baku State University played an invaluable role in preserving the ideas of the Republic of Azerbaijan and restoring independence.

On December 28, 1918, the parliament decided to send a special delegation, led by the chairman of the parliament, Alimardan bay Topchibashov, to the Paris Peace Conference. The Azerbaijani delegation, having overcome great difficulties, achieved de facto recognition of the Azerbaijani Democratic Republic by a number of large states.

One of the most important issues that constantly attracted the attention of the parliament and government of the republic was the issue of borders and relations with close neighbors. Although the relationship with Georgia was settled after hard work, the relationship between Azerbaijan and Armenia could not be returned to normal due to the large territorial claims of the Armenian government.

During the period of the Azerbaijani Democratic Republic, a number of agreements and treaties were signed with neighboring Iran, and these documents were ratified by the parliament.

In total, more than 270 bills were submitted to parliament, of which about 230 were adopted.

Deputies from 11 factions and groups took part in the preparations, discussions, and approvals of parliamentary laws.

There were 11 commissions in parliament.

The activities of the parliament were regulated on the basis of the "Order of the Parliament of Azerbaijan" specially prepared for this purpose.