Samad Vurgun and Georgia: What links poet's great-grandfather with Georgian tsar? - RESEARCH Today, 65 years have passed since the death of a prominent representative of Azerbaijani literature, People's Poet Samad Vurgun. Today, 65 years have passed since the death of a prominent representative of Azerbaijani literature, People's Poet Samad Vurgun.

The local bureau of Report prepared an article based on newspapers and photos obtained from the archives of the Georgian National Parliamentary Library about the great poet.

"... On May 12, 1956, Baku celebrated the 50th anniversary of Samad Vurgun's birth. Numerous friends and admirers of his talent - K.Simonov, G.Leonidze, N.Zaryan, G.Gulyam, and others-addressed the jubilee to express their tremendous gratitude, love, respect, and admiration. Unfortunately, the jubilee was not in the crowded hall of the opera house. The poet was bedridden with a severe illness. On May 27, 1956, his heart stopped beating. In 1961, the inauguration of a statue of the Azerbaijani People's Poet was held in Baku.

The article "In love with life. To the 60th anniversary of the birth of Samed Vurgun," published in the newspaper "Soviet Adjara" on March 20, 1966, included these lines. 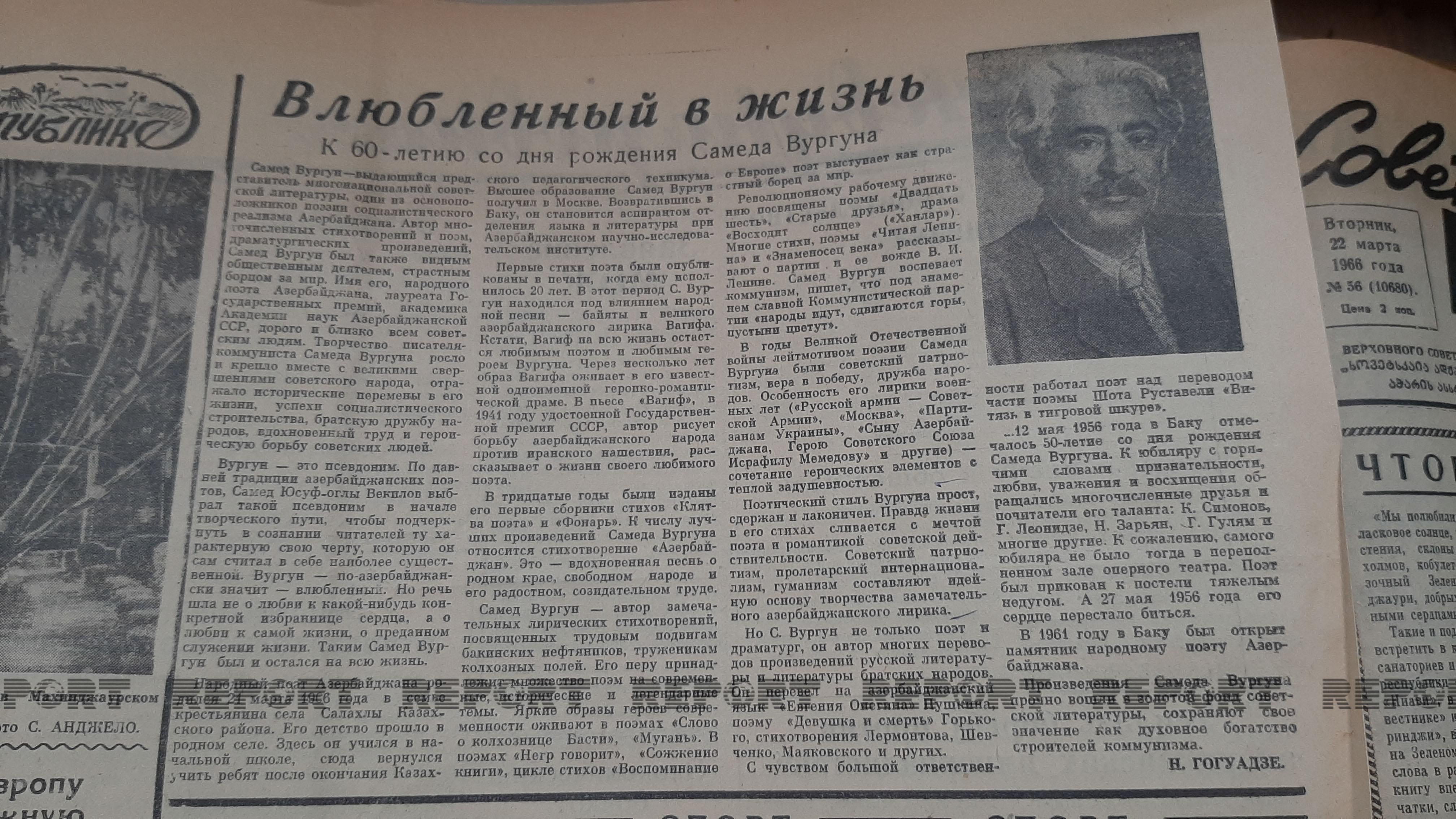 The author of the article, which provided detailed information about the life and creativity of the Azerbaijani port, Goguadze, explained the meaning of the nickname Vurgun to the readers. "Samad Yusif Vakilov chose this nickname at the beginning of his career following the ancient traditions of Azerbaijani poets and underlined the most critical aspect of his character. However, it is not a question of love to someone, but to the life itself and faithful service, which is how Samad Vurgun was and will remain so until the end of his life. "

"Vurgun was not only a poet and playwright but also the author of translations from the literature of Russia and fraternal peoples. He translated Pushkin's "Eugene Onegin," Gorky's "Girl and Death," and poems by Lermontov, Shevchenko, Mayakovsky, and others. The poet worked on translating a part of Shota Rustaveli's poem "Wrestler in Tiger Skin" with great responsibility.

According to the author, the poem "Azerbaijan" is among the best works of Samad Vurgun, which is a song inspired by the native land, its creative and constructive, free people. 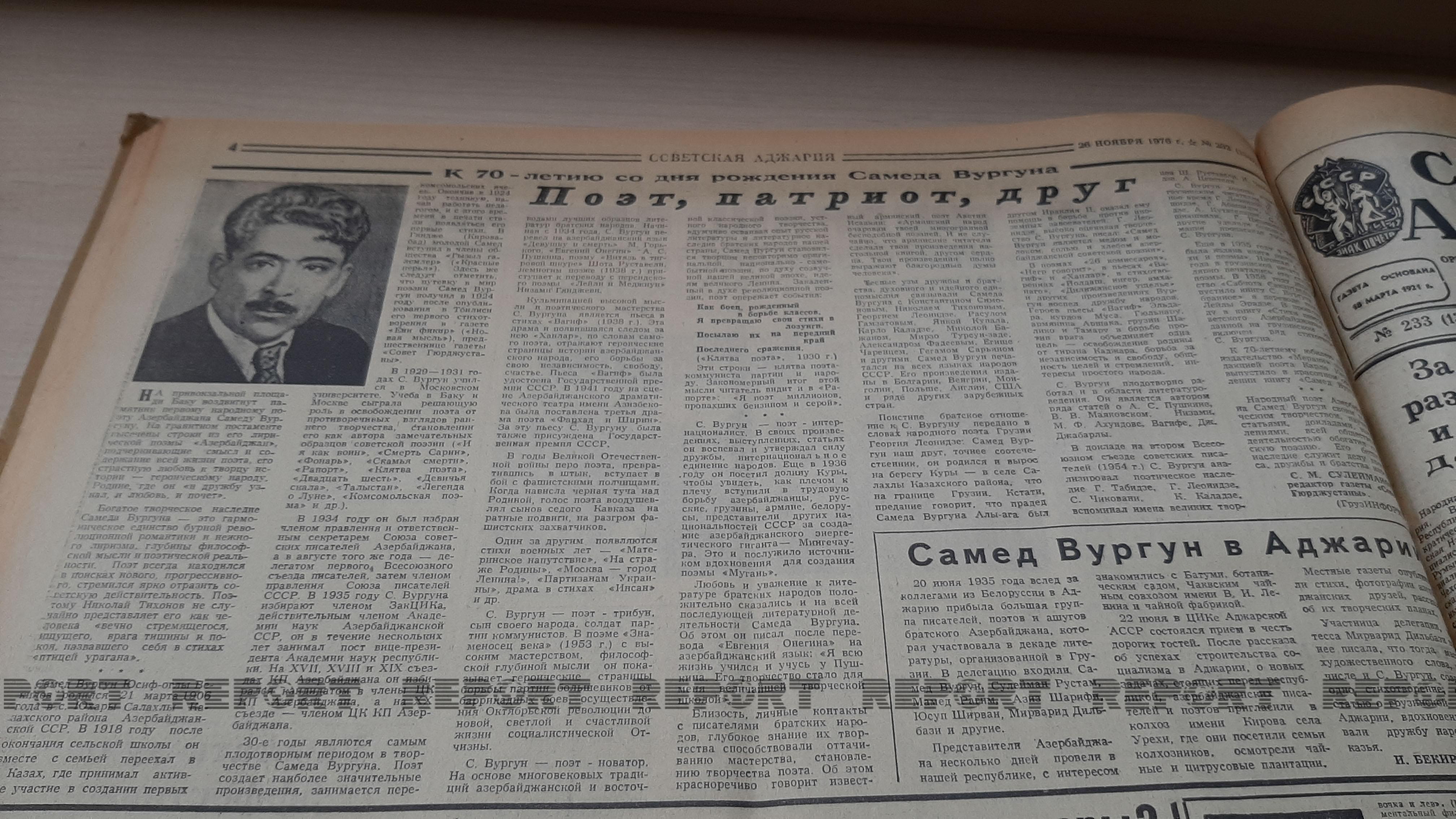 An article entitled "Poet, patriot, friend" dedicated to the 70th anniversary of the poet was published in the November 26, 1976 edition of the mentioned newspaper. The article, authored by an editor of the "Soviet Georgia" newspaper Suleyman Suleymanov, contains the words of the Georgian People's Poet Giorgi Leonidze about Vurgun: "Samad Vurgun is our friend, more precisely our compatriot. He was born on the shores of the Kur River, in the Salahli village, Gazakh region, on the border with Georgia. According to the legend, Samad Vurgun's great-grandfather Ali Agha was a friend of the Georgian Tsar Irakli II and helped him in the fight against foreigners.

The Georgian poet praised Samad Vurgun's work in the following words: "Samad Vurgun is the honey and milk, salt and bread of Azerbaijani Soviet literature."

The article notes that in his report to the All-Union Congress of Soviet Writers in 1954, S. Vurgun analyzed the poetic heritage of Tabidze, Leonidze, Chikovani, Kaladze, geniuses such as Rustaveli, Chavchavadze, Tsereteli, and remembered their names. 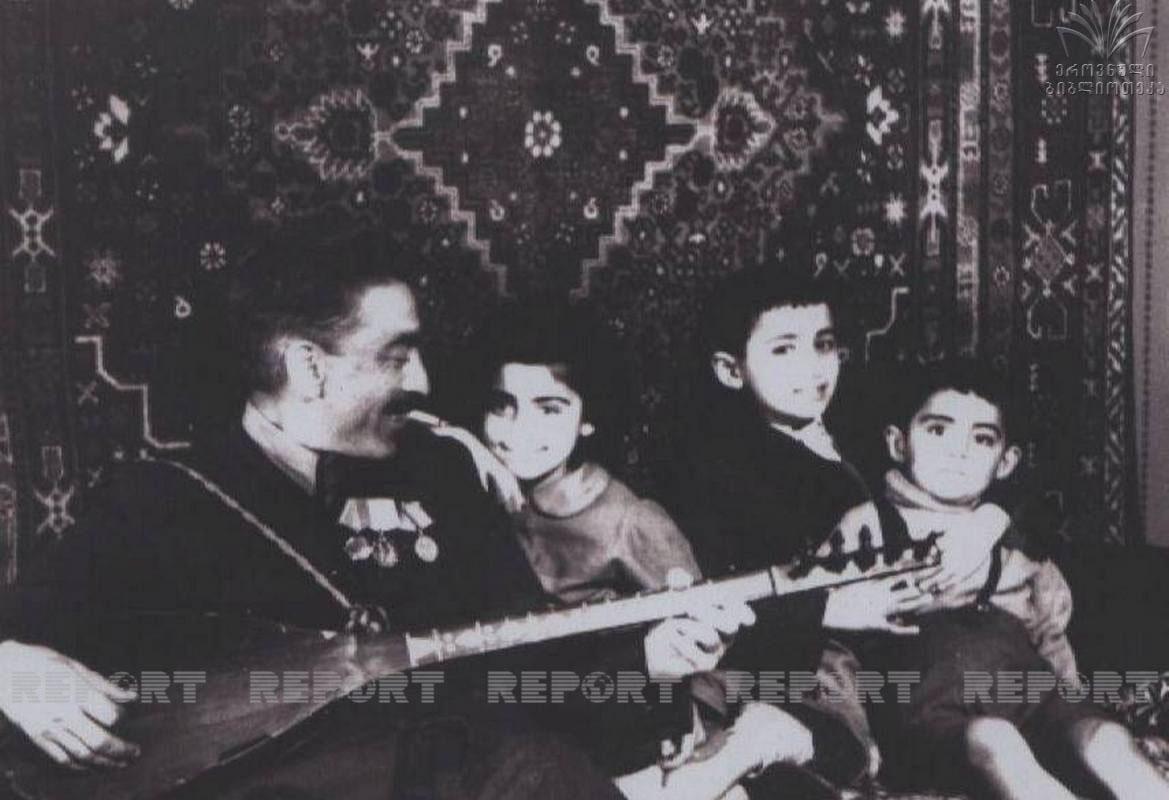 The author writes that the poet's book "Poems and Poems" was published in 1935 in Tbilisi. Since 1940, the Georgian press had regularly published Vurgun's poems. In 1958, the book "Selected" consisting of poet's works, translated by Leyla Eradze, was published. The book "Poems of Soviet Azerbaijani poets," published in the Georgian language in 1975, included his several poems. On the occasion of the 70th anniversary of Vurgun, the Merani publishing house published a book, "Samad Vurgun," edited by the poet Carlo Kaladze. 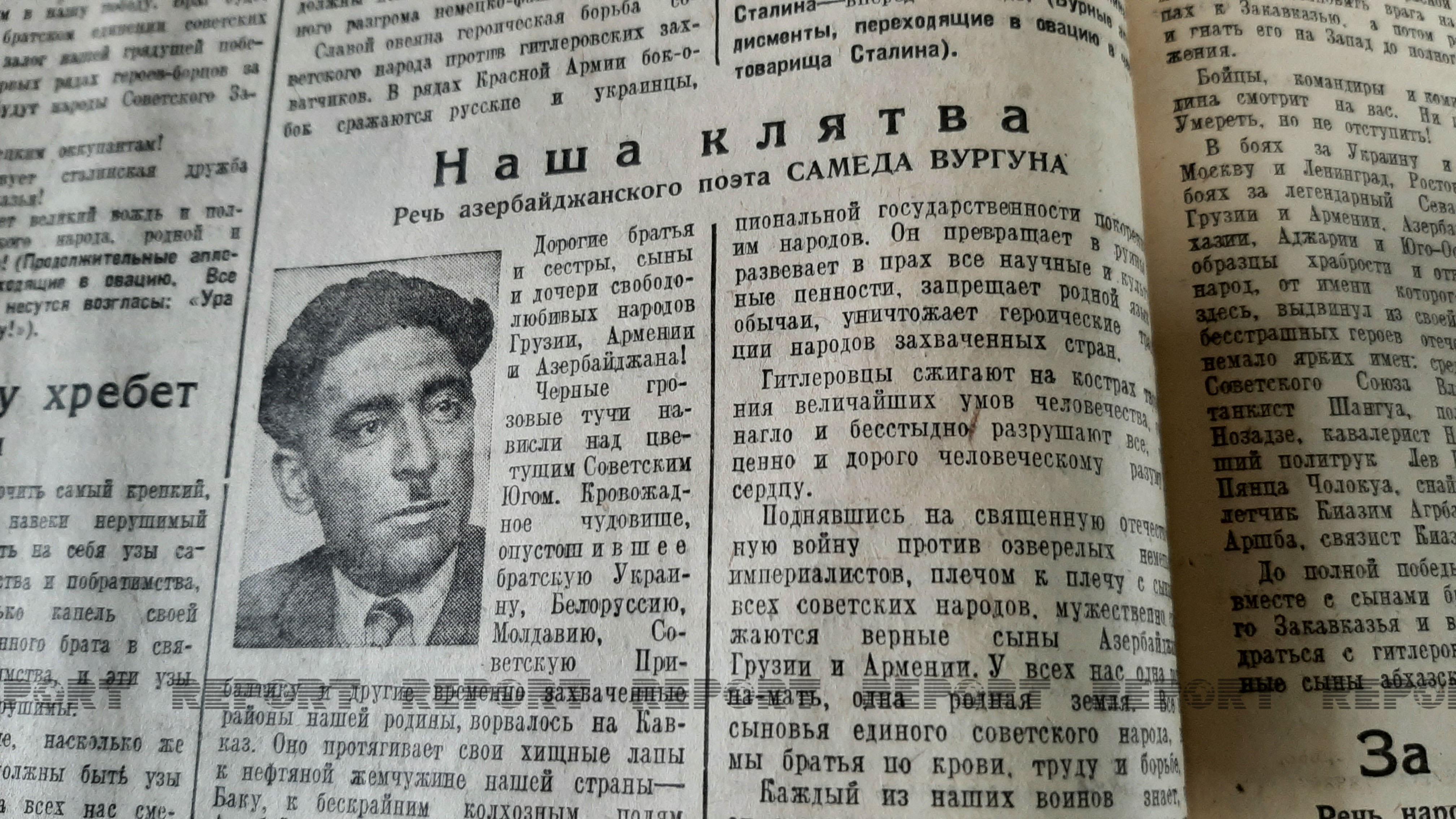 The archive newspaper materials also included a speech of the Azerbaijani poet "Our oath" made at the anti-fascist rally held on August 23, 1942, in Tbilisi. In the August 24 edition of the Zarya Vostoka newspaper, Vurgun called on the protesters to fight against the Nazi occupiers. The enemy attracted by the oil sources of Absheron and the white gold-covered Mughan steppes wants to occupy glorious Azerbaijan. The enemy wants to enslave the Azerbaijani people and wipe them off the earth. However, the German occupiers will not be in the free and happy Azerbaijan, in the land where the poetic genius Nizami Ganjavi slept.

In his speech, S. Vurgun noted that the Azerbaijanis are brave and freedom-loving people: "The nation, that carries tireless millennial struggle for freedom and independence on the shoulders, and the glory of Koroglu and Babek will never allow the enemy to trample on their homeland ... Today, the Azerbaijani people remain faithful to the heroic traditions of his immortal ancestors sending most courageous sons and daughters to the front ... The fascist invaders can not enter the Caucasus! We will die, but not let Hitler's army enter our sacred land. Brethren, let's fight like lions and remember that death for the Motherland is immortality.

Archive photos of the poet, stored in the "Azerbaijan Photo chronicle" section of the Central Library of Georgia, show that his children, brother Mehdikhan Vakilov (1932), Russian poet Mikhail Sholokhov, Georgian and Armenian poets Giorgi Leonidze and Gegam Saryan were hunting. 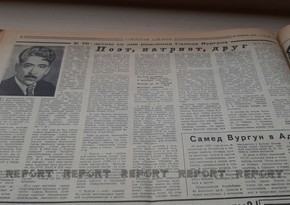 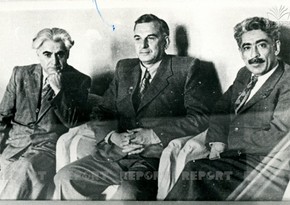 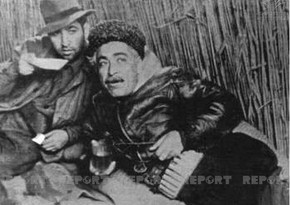 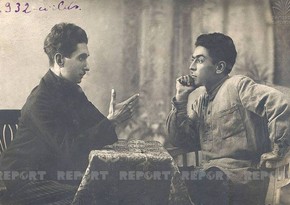 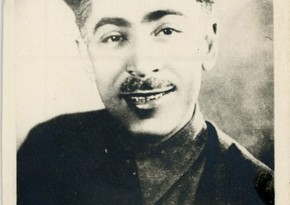