Jewish Journal publishes article about faith leaders' visit to Shusha The article by head of the Mountain Jews Religious Community of Baku, Milikh Yevdayev about the visit to Shusha within a delegation of the religious community leaders in Azerbaijan was published in one of the biggest Jewish newspapers of the United States 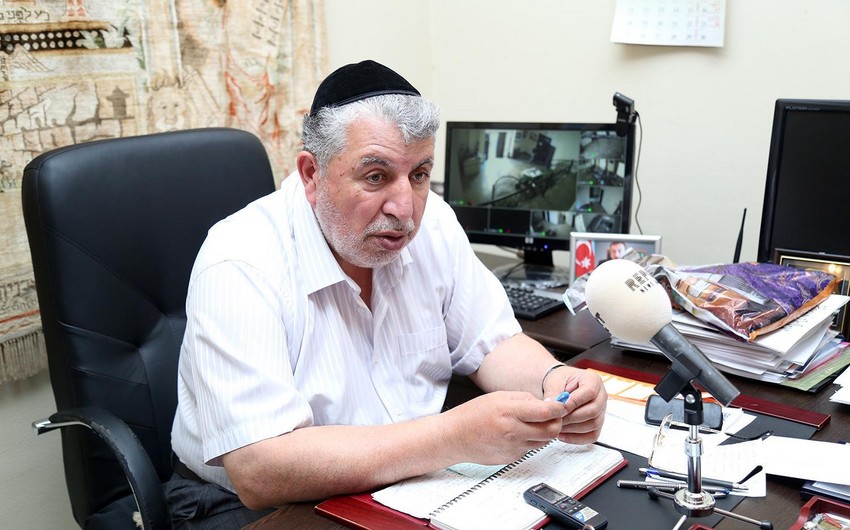 The article by head of the Mountain Jews Religious Community of Baku, Milikh Yevdayev about the visit to Shusha within a delegation of the religious community leaders in Azerbaijan was published in one of the biggest Jewish newspapers of the United States - the Jewish Journal newspaper- issued in Los Angeles.

Report informs that , which has both printed and online versions, boasts 4.5 million unique visitors per month.

In his article headlined 'Returning to the Jerusalem of Azerbaijan after 34 years' the author said that the last time he visited Shusha was in 1987. Before that, he visited Shusha at least once a year, as an employee of Soviet Azerbaijan’s Ministry of Light Industry. Stressing the importance of Shusha, Yevdayev noted that this predominantly ethnic Azerbaijani city is considered the cultural and spiritual capital of Azerbaijan, similar to what Jerusalem is for Israel and the Jewish people.

"The energy and character of the city was consummately bursting, nurtured by the artists and artisans that have always populated this picturesque hilltop city," the article reads.

"Founded by Azerbaijani ruler of Karabakh – Panah Ali Khan – in 1752, Shusha has been the birthplace of many great Azerbaijani composers, singers, poets and writers – a cradle of Azerbaijani culture and one of the cultural centers of the entire region; so much so that it was called the 'Conservatory of the Caucasus.'"

"This was changed when members of ultraradical Armenian parties from Armenia and its diaspora decided to make Karabakh part of Armenia and thus started a conflict that would kill and wound tens of thousands of people and ruin the lives of millions for decades to come," the author said.

He added that on May 8, 1992, Shusha was invaded by Armenia. Its entire Azerbaijani population was killed or expelled. They became part of over 800,000 Azerbaijani civilians who were forced out from their homelands as Armenia invaded around 20 percent of Azerbaijan’s sovereign territory.

"Every year since 1992, all Azerbaijanis would say 'Next year in Shusha.' This sacred dream finally came true in 2020, when Azerbaijan liberated Shusha and other territories from Armenia’s U.N.-condemned occupation."

"On this reunion visit after 34 years apart, I drove into Shusha as part of a delegation of faith leaders from Azerbaijan, representing the various denominations of Islam, Judaism and Christianity. Upon first sight, my heart sank, and I was glad not to be the one behind the wheel. The damage inflicted by nearly three decades of brutal occupation has left the beloved capital of Azerbaijani culture in immeasurable disrepair. To see a city that I knew so intimately for many years so utterly changed, entire buildings demolished into dust, and entire streets and homes leveled, was something I will never forget. But I will also never forget the inspiration I saw in the landscape – the lush, green abundance that overwhelms Shusha in a feeling of liveliness and hope. My fellow faith leaders prayed in their respective houses of worship, the Christians in one of the two churches that we visited, and the Muslim leaders, both Shia and Sunni, in two mosques of Shusha," the article said.

"The very idea of Shia and Sunni Muslims praying together is practically scandalous in almost every other part of the world, but in Azerbaijan we have a warm tradition of it, which blends seamlessly with our broader commitment to celebrating what is beautiful and peaceful about all religions, and creating a space for it that is sacred, safe and enduring. This explains how Azerbaijan has had a thriving Jewish population for over 2,000 years, and today as I lead the Mountain Jewish community of Baku in this era of limitless possibility, the values that have led us here are perhaps more important today than ever before," the article reads.

The author noted that before ending their visit to Shusha, they discussed the possibilities for eternally honoring Albert Agarunov, Azerbaijan’s National Hero, within Shusha. Albert was a Mountain Jew from Baku, who volunteered for the Azerbaijani Army in the early 1990’s to protect his beloved Azerbaijan from the invading army, and was considered a remarkable marksman and tankist, an unmatchably brave soldier, and a warm and caring friend. Albert was one of the last men standing in Shusha, before it was overtaken, and he lost his life because he left the safety of his tank to navigate the driver around the dead bodies strewn across the streets in Shusha. Albert was posthumously awarded the highest honor for a military hero by Azerbaijan, the title of National Hero, and is buried at the Martyrs’ Lane. In 2019, his statue was unveiled in Baku on a street that was named after him.