Ilham Aliyev: In 3 years we plan to complete all major infrastructure projects 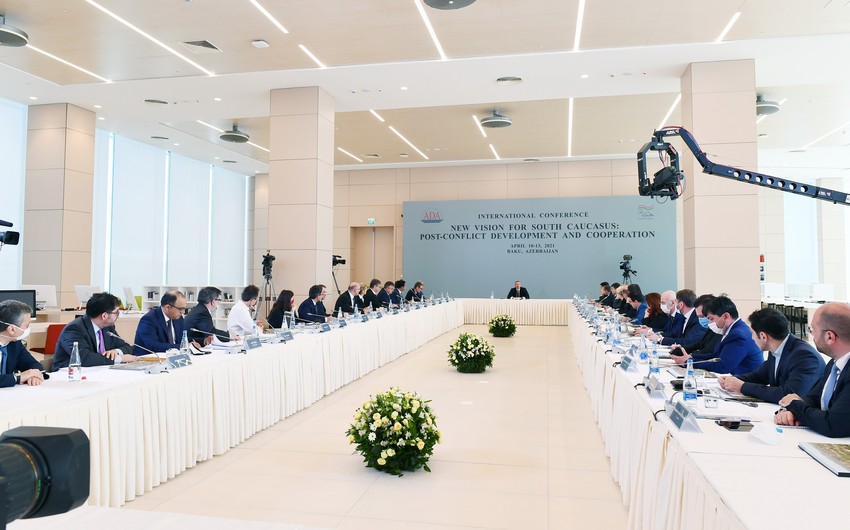 “What we plan now on the liberated territories is only based on our own budget. We did not get any message yet from any international organization or any country with respect to assistance so if they help we’ll be grateful, if not, anyway we have to do what we have to do and we will restore those territories,” Azerbaijani President Ilham Aliyev said addressing a conference entitled ‘New Vision for South Caucasus: Post-Conflict Development and Cooperation’ at ADA University on April 13, Report informs.

He was answering the question about the participation of the EU in the restoration of the liberated territories.

“Of course, the companies from Europe, as I said, from the EU space, they’re already present there, but it’s company-to-company cooperation, it’s not the investments, you know, it’s their contracts,” Ilham Aliyev said.

“With respect to what will be in five years in those areas, it’s difficult to predict. We can predict what we will do in five years, we have now not completely finalized the roadmap but basically know what will happen. I think in the coming three years we will complete all the major infrastructure projects, like railroads, highways, power generation, water supply, and we’ll be in active phase of construction. We need to do everything properly, to plan properly, to have a proper master plan for all the liberated cities to have the master plan for reconstruction of villages so that people who return there they have decent means of living so that they do not depend on the state, especially the area is very appropriate and the soil is good and water resources. So, we want people who will live there to be financially independent,” he noted.

“I think by that time the Zangezur corridor will be in operation, definitely. Because we put a target to 2-2.5 years, and construction of 40 kms of the road in Meghri district will not take more than that. Of course, if there is coordination and if Armenia doesn’t put artificial obstacles,” Ilham Aliyev added.