Ilham Aliyev: Armenian government should start telling truth to its people If we are talking now about post-conflict situation, we need to concentrate on some elements which can lead to future reconciliation 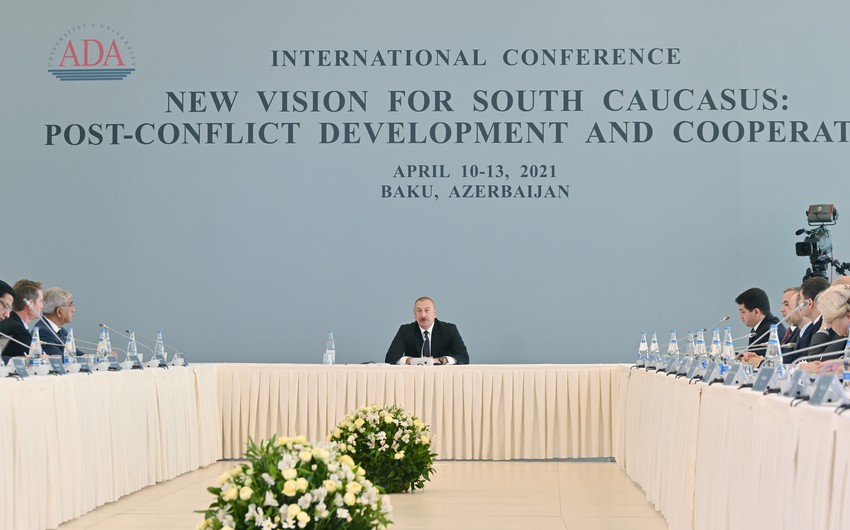 "If we are talking now about post-conflict situation, we need to concentrate on some elements which can lead to future reconciliation," Azerbaijani President Ilham Aliyev said speaking at a conference entitled ‘New Vision for South Caucasus: Post-Conflict Development and Cooperation’ at ADA University on April 13, Report informs.

“But there’s been such a long period of deliberate policy of demonization of Azerbaijan, inventing stories, presenting Azerbaijanis as enemies, as those who occupied Armenia or occupied Karabakh. So, probably it takes time for the society to understand and not only during the war but even after war, what we have done. We returned more than 1,500 dead bodies of Armenian soldiers, we are still participating with Russian peacekeepers in these searching operations, and I can tell you that in the First Karabakh War, we had almost 4,000 missing Azerbaijani soldiers. None of them was returned. None of them. So, this is the difference,” he said.

“We provide easy transportation, logistical support to Russian peacekeeping forces through our railroad. They bring their goods by the railroad to Barda. It’s much easier and cheaper rather than to fly to Yerevan and then go five hours or six hours by Lachin corridor,” he noted.

“And many other elements I can bring. We allowed Russian Gazprom to transport natural gas to Armenia through Azerbaijani territory because of the repair work on the Russian territory. We could have said ‘No,’ but we said ‘Yes.’ This is another sign, another gesture. We allow Armenians to use 21 kilometers of our road in Zangilan and Gubadli districts, which is the road situated on Azerbaijani territory but was used by Armenians, and we allow it, we don’t block it. Did they allow us to move one meter to the territories which were occupied during the war? No. So, these are all unilateral steps, and it’s not only gesture, it’s a deliberate policy of turning the page of the war. And I said, despite of what I said in the introductory comments that we will never forget, at the same time we need to look to the future. I think here we expect more activity from civil society of Armenia. Because neither the government nor opposition today will not even afford them to say any even not a positive, a neutral word about Azerbaijan. Because it’s a concept of Azerbaijanophobia, it’s decades of cultivation of hatred against Azerbaijanis, actually depriving them of their right. But I think they should find the courage, and they should start telling truth to Armenian people because the war is already in the history, the conflict is resolved, and we need to look to the future,” Ilham Aliyev added.