Former US ambassadors to Azerbaijan issue statement On June 12, Azerbaijan and Armenia took important and welcome steps to reduce tensions between the two counties and in the South Caucasus more broadly, members of the Consultative Council of the Caspian Policy Center, former ambassadors of the United Stat 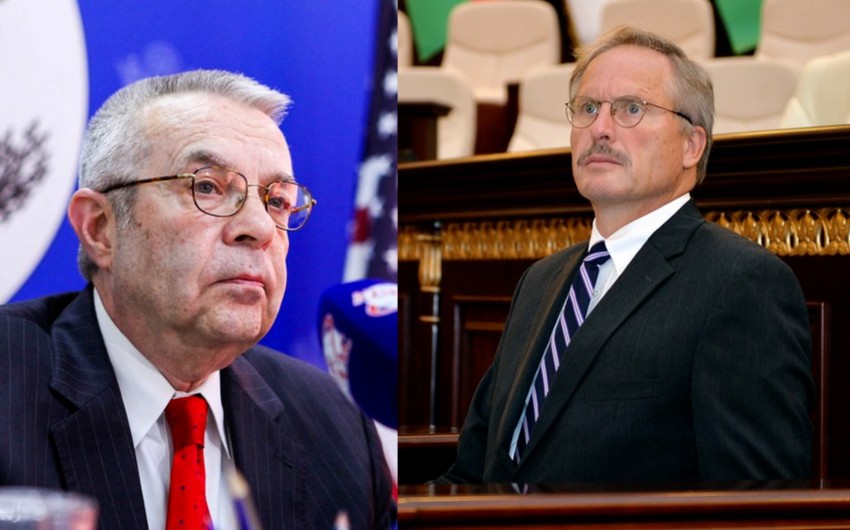 On June 12, Azerbaijan and Armenia took important and welcome steps to reduce tensions between the two counties and in the South Caucasus more broadly, members of the Consultative Council of the Caspian Policy Center, former ambassadors of the United States to Azerbaijan Richard Hoagland and Robert Cekuta said in a joint statement, Report informs, citing the center.

"Azerbaijan released 15 Armenian citizens it had detained for illegally crossing into its territory, and Armenia provided maps showing the placement of anti-tank and anti-personnel mines in the areas now back under Azerbaijan's control following last year's war. The exchanges reportedly took place on the Azerbaijani-Georgia border with the participation of Georgian government representatives. Despite the cease-fire that Russian President Putin engineered in November 2020 that ended the weeks of full-scale fighting between Armenia and Azerbaijan, there had been a serious rise in tensions in recent months," the statement reads.

According to it, Azerbaijan's return of the detained Armenians and Armenia's decision to provide information that will aid in de-mining the formerly occupied areas are essential in halting the rising tensions in the South Caucasus.

"Hopefully, they will also put the two countries more firmly on a path towards building a lasting peace that would bring both Armenia and Azerbaijan greater security and prosperity," the ambassadors add in the statement.

"At the same time, as important, necessary, and highly welcome as the actions the Armenian and Azerbaijani governments took June 12 are, much more still needs to be done to counter decades of conflict and to help the people of the countries build a lasting peace. Nevertheless, the June 12 actions show that focused, persistent, high-level diplomacy can be effective and is key to helping build peace in the region. The United States, the whole of the OSCE's Minsk Group, and others with influence will need to remain engaged to help move this process forward," the former ambassadors said.