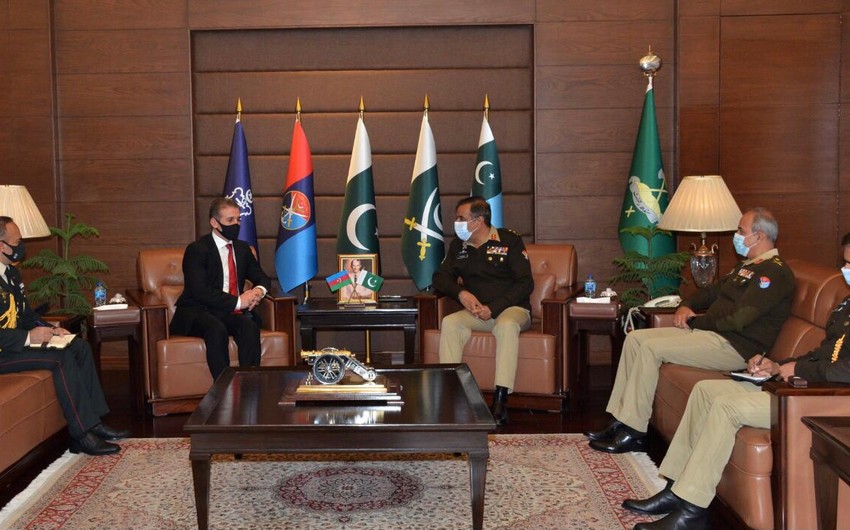 Azerbaijani Ambassador to Pakistan Ali Alizadeh met with Chairman of the Joint Chiefs of Staff Committee of the Pakistani Armed Forces, General Nadeem Raza, Report informs, referring to the Azerbaijani embassy in Pakistan.

Noting that Azerbaijan's victory in the Patriotic War and the liberation of its lands were welcomed in Pakistan, General Raza congratulated the Ambassador on this occasion and said that Pakistan always supported Azerbaijan's just position on Nagorno-Karabakh.

Expressing satisfaction with the development of fraternal relations between the two countries, the general stressed that the Pakistani Armed Forces attach importance to the exchange of experience with the Azerbaijani Armed Forces, joint exercises, mutual visits, continuation, and further strengthening of military, military-educational and military-technical cooperation. He said that efforts in this direction would be intensified.

Ali Alizadeh spoke about Armenia's recent provocations against Azerbaijan and the current situation in the region after the joint statement dated November 10, 2020.

The Ambassador noted that Azerbaijan and Pakistan have friendly relations and cooperation based on solid foundations and reflecting the will of the two brotherly people. Besides, the two countries have a strategic partnership in the defense, security, and military. As a result of their positive approaches, there has been a steady increase in these areas.

Stressing with satisfaction that Pakistan stood by Azerbaijan during the Great Patriotic War and supported its just position, Alizadeh thanked the people and Government of Pakistan, as well as the Pakistani Armed Forces, for this moral and political support.

The sides exchanged views on the efforts of Pakistan and Azerbaijan to ensure peace and stability in the region and other issues of mutual interest.