Azerbaijani president: Zangazur corridor must and will be opened 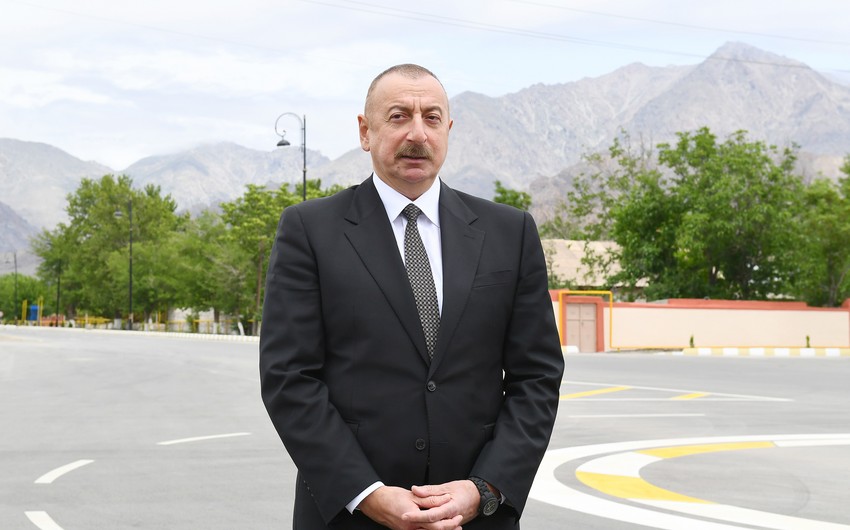 “I recently visited the railway station the Armenians destroyed in Minjivan settlement about 50-60 kilometers away from here. There is no railway there now. The contemptible enemy has destroyed and looted the entire railway infrastructure. There will be a center there and a center here. There is only a 40-kilometer Zangazur corridor separating Zangilan from Nakhchivan, which must and will be opened,” Azerbaijani President Ilham Aliyev said on May 10 in an interview with AzTV during his trip to the Nakhchivan Autonomous Republic, Report informs, citing .

President stressed that this is reflected in the joint declaration signed on November 10.

“Since then, very serious steps have been taken in this regard at the meetings of the working group at the level of deputy prime ministers of Azerbaijan, Armenia, and Russia. I can say with full confidence that the railway corridor will be opened. Let no one have any doubts about that. Of course, Azerbaijan will fulfill its responsibilities.

As you know, I laid the foundation stone of the Horadiz-Aghband railway. The missing 15-16-kilometer section will be built here – from Ordubad to the Armenian border. The Nakhchivan railway is in operation, as both passenger and cargo transportation is carried out. In other words, the entire infrastructure on the territory of Azerbaijan will be created after the construction of the Horadiz-Aghband railway,” President Ilham Aliyev said.

“As for the section of the railway in the territory of Armenia, as you know, there is no such thing as Armenian railways. Armenian railways are owned by Russian railways. This means that Armenian railways belong to them. Therefore, we are discussing this issue mainly with the Russian side. Our next historic achievement will be to connect Zangilan, located in the Eastern Zangazur region, with our ancient lands of Western Zangazur and then with Nakhchivan and Turkey through Ordubad. I am sure that this will happen – I have no doubt about that. I want to say again that Azerbaijan will fulfill its responsibilities and do its best to ensure that there are no problems with the implementation of this project,” the head of state said.