Azerbaijani president says Erdogan’s Shusha visit was right of way "In previous years, Mr. President Recep Tayyip Erdogan provided extensive information on Azerbaijan's just course from high platforms. This issue has always been the number one issue on his foreign policy agenda. This time, after the victory, we are very 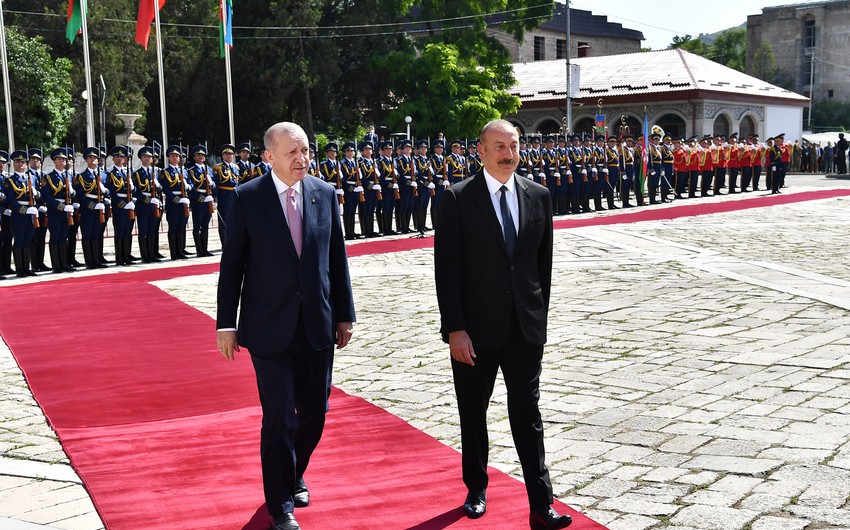 "In previous years, Mr. President Recep Tayyip Erdogan provided extensive information on Azerbaijan's just course from high platforms. This issue has always been the number one issue on his foreign policy agenda. This time, after the victory, we are very happy that he said these words (from the UN General Assembly) platform. This once again shows that Recep Tayyip Erdogan is always with Azerbaijan," Report informs, citing President Ilham Aliyev's interview with Turkish Anadolu Agency.

"As he said in the first hours of the war, Azerbaijan is not alone, Turkey is with Azerbaijan, and this added additional vigour and moral strength to ours. You know how much Turkey is a native and dear country for Azerbaijan and vice versa. We have made huge strides recently. We have almost raised our relations to the highest level. As you probably remember, I said that there is no such an example of cooperation, friendship and brotherhood in the world.

"I also said that there are many countries that have the same history, the same ethnic roots, the same language, but there are so many differences, so much mistrust, so many problems between them. That is, ethnic, religious and cultural roots do not mean that such countries will be fraternal. There are many such cases. Both in the Middle East and in the post-Soviet space. Therefore, I believe that it is our special contribution to building such a beautiful palace of relations on a very strong historical and cultural foundations. Both of Mr. President Recep Tayyip Erdogan and mine. Here I must stay away from modesty, and this is the truth. The Second Karabakh War proved this once again. Being with us, Turkey sent a message to the whole world – do not interfere, do not get involved, Azerbaijan is on the right path, and if you interfere, if you get involved, you will see Turkey in front of you. This, of course, was a great advantage.

"After the Second Karabakh War, our relations have risen to a higher level. After the war, I invited Mr. President to Shusha. At that time, I said that no one from other countries would go to Shusha until he came to Shusha. There were even people from Turkey, who wanted to go there. I told them thank you, but wait, let my brother go to Shusha, then your path is open," the president said.