Anadolu: Azerbaijan wants Armenia to observe ceasefire The Spanish-language version of the Turkish Anadolu agency published an article about a press conference held by Azerbaijani President Ilham Aliyev for local and foreign media on February 26. 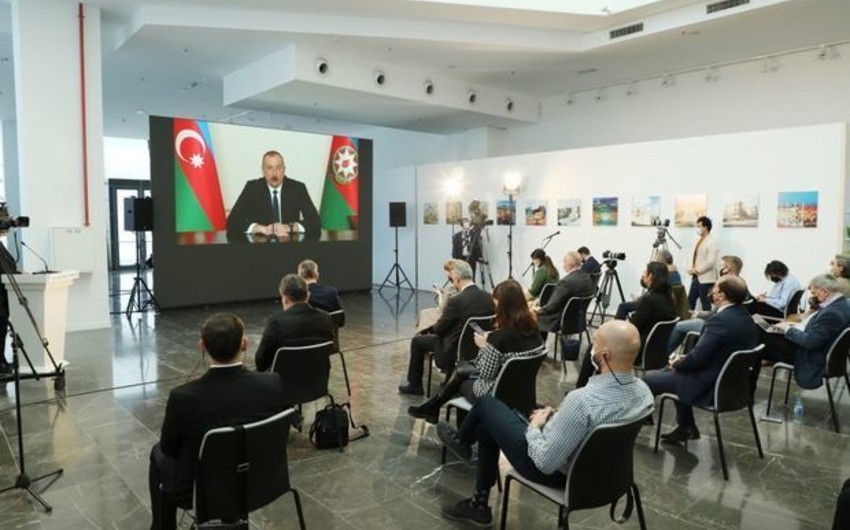 The Spanish-language version of the Turkish Anadolu agency published an article about a press conference held by Azerbaijani President Ilham Aliyev for local and foreign media on February 26.

According to Report, the article notes that Azerbaijani President Ilham Aliyev called the political crisis in Armenia the result of Yerevan's occupation policy.

Azerbaijani President Ilham Aliyev told a press conference for local and foreign media on Friday that Armenia must abide by the ceasefire statement signed on November 10 to prevent another escalation.

"I hope that despite the current situation in Armenia, the statement signed on November 10 will be implemented. Otherwise, Armenia will find itself in an even more difficult situation. The choice for Armenia is not so great. They must reconcile and reckon with new realities," President Ilham Aliyev said.

"Today, Armenia is in such a difficult situation that the processes taking place there greatly undermine the foundations of the country's statehood. The culprits are the past and present leaders of Armenia. "For twenty years, the Kocharyan-Sargsyan junta has effectively led Armenia into the abyss and to a crisis," he said.

The President of Azerbaijan said that Armenia's current political crisis is the result of the country's policy of aggression.

"It was our policy to shake and isolate Armenia economically. I said that Armenia should withdraw its armed forces from our lands. Then we can cooperate in the region, and change our policy. If they had agreed in time, they would not be in such a disgraceful situation today," Ilham Aliyev said.

The article also covers the history of the conflict and the objective facts about the 44-day war, noting that despite the November 10 statement, Armenia has violated the ceasefire several times.

Armenia has never been in such a miserable situation. Their leaders bear responsibility for such a situation. Both the junta leaders that led Armenia for 20 years - the Kocharyan-Sarkisyan junta, and the government that came after it, "President Ilham Aliyev said at a meeting with members of the families of martyrs and war invalids in the Ramana settlement of Baku.

"But for some reason, some non-governmental organizations and some governments, inspired by democracy, turn a blind eye to this. How can it be that the opposition in Armenia is oppressed, destroyed, arrested, and killed daily, but no one reacts to it. What does it indicate?" the head of state said.

"How to say, 30-year history once again proves that we did not win only over Armenia. Organized and powerful circles united against us and wanted to keep our land under occupation forever. Armenia was just a tool. We destroyed it. We have overthrown this insidious policy and restored justice," Ilham Aliyev said.