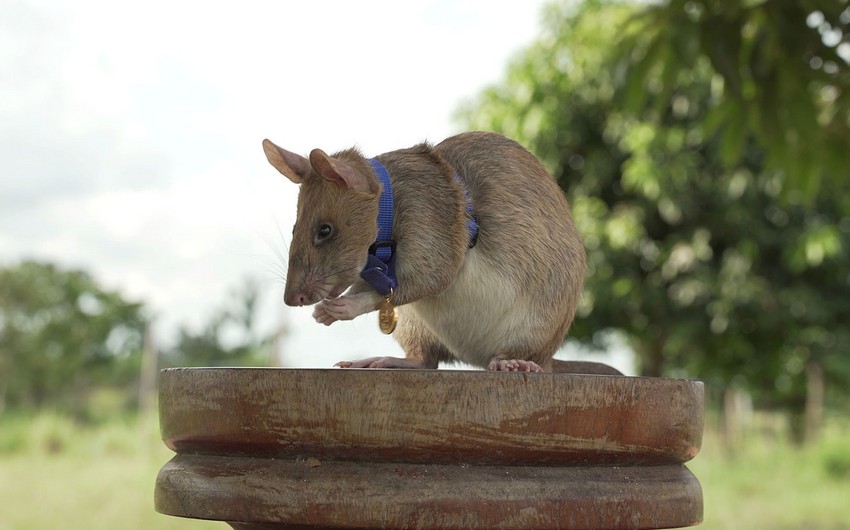 An African giant pouched rat has been awarded a prestigious gold medal for his work detecting land mines.

Magawa has sniffed out 39 landmines and 28 unexploded munitions in his career.

The UK veterinary charity PDSA has presented him with its Gold Medal for "life-saving devotion to duty, in the location and clearance of deadly landmines in Cambodia."

There are thought to be up to six million landmines in the southeast Asian country.

is inscribed with the words "For animal gallantry or devotion to duty." Of the 30 animal recipients of the award, Magawa is the first rat.

The seven-year-old rodent was trained by the Belgium-registered charity Apopo, which is based in Tanzania and has been raising the animals - known as HeroRATs - to detect landmines and tuberculosis since the 1990s. The animals are certified after a year of training.

"To receive this medal is really an honor for us," Apopo chief executive Christophe Cox told the Press Association news agency. "It is big for the people in Cambodia, and all around the world who are suffering from landmines."

Magawa - born and raised in Tanzania - weighs 1.2kg and is 70cm long. While that is far larger than many other rat species, Magawa is still small enough and light enough not to trigger mines if he walks over them.

The rats are trained to detect a chemical compound within the explosives, meaning they ignore scrap metal and search for mines more quickly. Once they find an explosive, they scratch the top to alert their human co-workers.

Magawa is capable of searching a field the size of a tennis court in just 20 minutes - something Apopo says would take a person with a metal detector between one and four days.