Stephen Westhead: Development of Zafar gold deposit slated for 2023 In an interview with Report, Stephen Westhead, vice president of AIMC, spoke about the work done and future plans
116 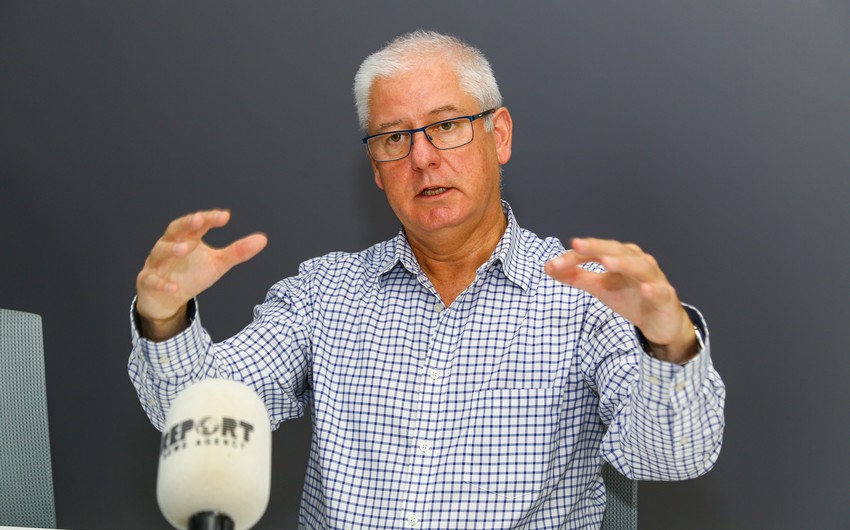 The contract area covered 6 mines of gold, silver and copper located in Nakhchivan, Tovuz, Gedabay and in the Karabakh zone, now liberated from occupation as a result of the Patriotic War. The total estimate of their reserves is about 400 tons of gold, 2,500 tons of silver and 1.5 million tons of copper.

The Azerbaijan International Mining Company (AIMC) is the operator of the works. The share of the Azerbaijani government in this contract is 51%, and the rest belongs to AAM.

While gold is already being extracted in Gadabay, the company is only planning to start work in Karabakh.

In an interview with Report, Stephen Westhead, vice president of AIMC, spoke about the work done and future plans.

What are your current activities in the Gedabay field? If I’m not mistaken the actual development there has started in 2009.

Gedabay has a long history of operations and dates back as far as maybe 2,000 years ago. More recent activity was by the German company Siemens brothers in the 1860’s. Since then basically there have been several work campaigns but stopped in 1917. Anglo-Asian Mining and AIMC started the construction of the mining operation in 2008 and produced our first gold a year later. So, it has a long history, it is a deposit that has been known but we have been the first company really to develop it in recent times.

Did the results obtained during the exploration phase justify themselves? As far as is known, these deposits were explored during Soviet period. How much new reserves were discovered as a result of the exploration?

The AIMC Gedabay contract area is about 300 square kilometers. So, it’s a big area with a lot of mineral potential. We are currently mining in three mines. We have one open-pit Gedabay and two underground mines, one below the Gedabay open pit and one adjacent mine called Gadir.

So, certainly, this is the result of the exploration, our exploration team has actually discovered new deposits that were not part of the Soviet era resource inventory.

The Ugur and Gadir deposits on which AIMC built mines were both found by our team.

We tend to use the Soviet data as guidelines but it is clear that technical parameters from before are different today.

We are able to mine lower grades, our process and exploration technologies are better today. So therefore, what yesterday were deemed not viable today possibly are.

So, certainly, we strongly believe the exploration has justified the development.

What kind of technologies does Anglo Asian mainly use in the mining activities?

Technology is very important from the point of view of being able to identify new resources, reserves, etc. My background is geology and mining, so in terms of exploration and geology we look at it from the big scale getting smaller and smaller. So, we look from satellite information, using new technology called WorldView-3, which data allows us to look at alteration that provides indicators of where mineralization may be.

We have also carried out a helicopter survey called ZTEM which is an electromagnetic and magnetic geophysics program.

It is the first time that technology was used in Azerbaijan, so we are very proud of bringing it into the country.

And then we follow up with our ground exploration geophysics, geochemistry and again using leading technology and state-of-the-art and analytical type of equipment.

We work with the universities here in Baku and also London.

As a company we do exploration and then we have the research aspect where we involve a lot of universities as well and try to develop technologies.

The next stage is something called hyper spectral and drill core scanning and we are looking actually to acquire that machinery which would allow us to look at all of the mineralogy and the type of chemistry of rocks.

We then have something called ‘agitation leach’ where we use special technology. Most of the world uses carbon technology to extract gold, we use resin. So again, it’s a new technology for the higher-grade gold material.

Separately then we have another process called flotation for managing the copper and to produce copper concentrate.

We have two end products: copper concentrate and gold Dore.

Another process called SART (sulfidation, acidification, recycling and thickening). Not many companies around the world do that. The heap leach produces the gold, SART produces additional copper concentrate and recycles chemicals.

AIMC are looking at different technologies all the time as the research develops in the industry and in the academia, we try to adopt those and grow the team and develop as we go.

How many employees do you have currently in Gedabay? What are your preferences for your staff?

Our company has a very strong health and safety environment. Clearly you can have all the technology, all of the equipment but if you don’t have the people to work, it’s just not going to happen. So, we spend a lot of time on development and training of our staff.

Since 2009 we have significantly grown as a company. Today at Gedabay we have nearly 1,500 staff in terms of our employed AIMC staff and contracted staff: about 830 people in Azerbaijan International Mining Company and about 650 contractors. The majority of our contractors are locals.

We are trying to reduce and minimize the ratio of foreign staff to local staff but AIMC is well within our guidelines. We have programs for knowledge transfer and help to train our local teams.

Are there any changes in the company’s production and export forecasts for next year?

No, the company will continue to produce gold Dore and the copper concentrate. We are not changing any technologies or producing any other key different minerals. Our planning of budgeting is ongoing at the moment, but generally we try to maintain a stable level. In terms of export, we aren’t going to change anything too and will act according to the current schedule.

What is your progress in a Zafar gold and copper deposit? What is your commissioning timeframe? Is it affected by COVID 19 pandemic?

The pandemic has obviously been a very difficult situation for our country as well as for our company. But our HSE department is very good in terms of managing the health and safety, we have on-site doctor as well with medical facilities.

We have created isolation centers in and around the Gedabay area that when people come back to work, essentially, they stay in those places for few days and then get checked [PCR tests] before travelling to Gedabay mine sites. Visitors usually have to have PCR tests as well to be allowed on-site.

Clearly, we have had some cases and there has been impact with regards to import of equipment etc.

The drill crew that are working on Zafar field are from Azerbaijan. We currently have five drill rigs working 24 hours a day. The analysis is carried out at AIMC and then quality control is checked overseas.

So, in terms of a timeframe, we are still quite comfortable on the project timeline.

Zafar itself is going to be a copper project, and we’ve carried out an initial resource which has given us about 8.5 million tons of mineralized rock, which essentially holds 51,000 tons of copper, 82,000 ounces of gold and about 40,000 tons of zinc.

With the drilling results we will be able to have an idea on the economics, which results in reserves that are expected to be ready in the first half of next year. The intention is to go into production in 2023. So far, we’ve drilled about 35,000 meters, we have about another 5 kilometers to go to finish the project. It’s a very exciting project for us, and the team have been able to manage the COVID restrictions quite well and works are going according to schedule.

Finally, what are the company’s future plans?

In summary, to continue to grow our mining operations and expanding to new opportunities, new territories with a focus on gold and copper. Now copper is becoming much more important for us as we’ve gone deeper in the Gedabay open-pit.

Zafar is more copper, which today is very good, as the copper prices now are over 9,500 dollars per ton so we will benefit from that copper production as well.

So certainly, copper is going to become very important for AIMC and of course, with these new projects we’re able to continue to benefit the local communities and provide the local employment and we work very closely with the MENR (Ministry of Ecology and Natural Resources of Azerbaijan). So, our operations I think will also help with the development of the future of Azerbaijan’s mining sector.