Ukraine’s Minister of Youth and Sports: We are working on new action plan within agreement with Azerbaijan 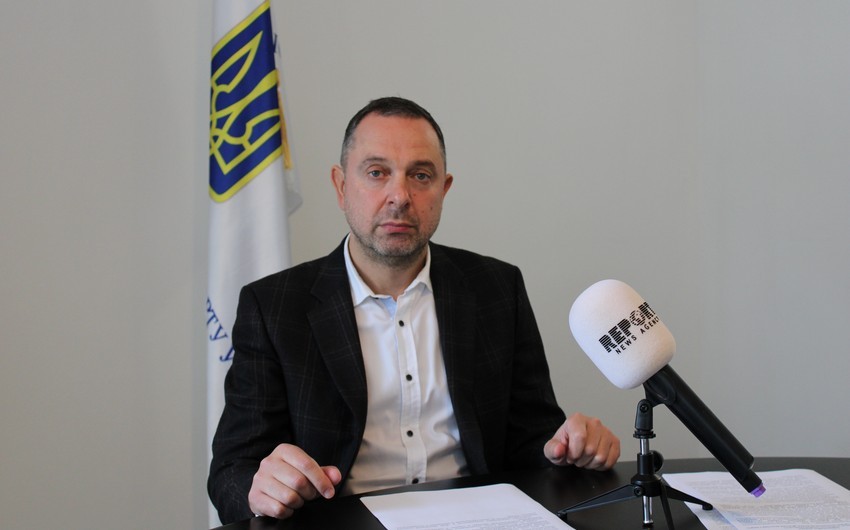 - Cooperation between Ukraine and Azerbaijan has switched to a new plane. How does this manifest and will manifest itself in the context of youth policy? What are the shortcomings in this area?

- In a broad sense, we have switched to a new policy. This year we have approved new documents, because after analyzing the preliminary stage of the implementation of youth policy, we came to the conclusion that it is necessary to create opportunities so that young people feel that they can realize their potential in Ukraine. This concerns the development of international youth cooperation and interaction among the youth of our country. We don’t categorize them in any way. But we understand that we must create conditions in which every category of young people will feel our assistance.

- How would you assess the organized work of Azerbaijani youth in Ukraine? In general, to what extent are you satisfied with the activity of Azerbaijanis in all spheres of the country’s life?

- We interact with various public organizations. First of all, we cooperate with large associations. We have two of them in our country, one of which is the National Youth Council of Ukraine. The Union of Azerbaijani Youth of Ukraine is a member of this council. Taking part in this great joint work, they are involved in various processes related to the implementation of youth policy. First of all, this concerns participation in various events, competitions of public organizations, youth exchanges, etc. Most importantly, they take part in the decision-making process related to solving urgent problems of young people. In 2021, important documents for Ukraine were approved - a new law “On the basic principles of youth policy,” the National Youth Strategy for the next 10 years, a new state program “Youth of Ukraine” until 2025. We have determined for ourselves in which direction to move on, and we have set priorities.

We cooperate with all youth organizations. Speaking about Ukrainians who maintain ties with their historical homeland, national youth associations, one of the most active in this regard is the Union of Azerbaijani Youth of Ukraine. They organize various forums, participate in certain political campaigns. Their activity is obvious. - Sometimes there are statements that the Azerbaijani youth is either insufficiently represented in the electoral bodies of the country, or is not represented at all. What do you think is the reason for this state of affairs?

- This applies not only to Azerbaijani youth. Young people in politics in our country is quite problematic. Ukraine has a mixed electoral system, but quotas are not granted to ethnic communities. Making a digression, I will note that in accordance with the new concept, we no longer have national minorities, but national communities. Regardless of whether you are an ethnic Azeri, Russian or Jewish, to get elected you need to integrate into politics. In my opinion, such questions should be addressed primarily to Azerbaijani youth. As already noted, Ukrainians of Azerbaijani origin are quite active and, as an organization, have good chances to achieve the set objectives. However, the intention to participate in policy-making and public administration at the local and national levels is an individual process. The state program identifies tasks to improve young people's skills for their active participation in the public life of the country, familiarization with state processes, the mechanism of functioning and interaction of institutions of the political system. It is up to a citizen of Ukraine to decide how to use this later. As we have already said, since there is no quota for national communities, a person must be integrated into political processes, nominating himself either at the party level or in local elections. As for the representation of youth in the political life of Ukraine, the percentage in the country is quite low. Therefore, it is necessary to continue work in this area. According to the information we have, members of the Azerbaijani community are represented at the local level. I cannot name the number and spheres, but I know for sure that they are represented.

- What concrete steps are being taken on youth policy in Ukraine, which is going through a period of serious reforms?

- As I have already noted, we have undergone a transformation of youth policy and certain strategic documents have been approved. We tried to improve the existing base and revise the approaches to working with youth. Close attention has been paid to a number of aspects: primarily, the work with effectively operating youth centers that maintain direct contacts with representatives of various youth categories. Secondly, these are professionals working with young people - youth workers. There are quite a few such people. We want them to keep up with the times. At the same time, we paid special attention to how to effectively convey information to different categories of young people, since young people living in the city are completely different from those living in the countryside. While the Internet is sufficient to provide information to urban youth, other methods should be used for rural youth. In addition, we paid attention to volunteer activities. The main goal of our program is to ensure more active participation of young people in the country’s public life. - The issue of the outflow of youth from Ukraine is being discussed. What should be done to prevent such trends?

- I can explain the outflow of young people from the country by the fact that they are in search for better living conditions, a better level of education, and more jobs abroad. They do this in order to first of all gain confidence in the future. That’s because as soon as a person satisfies personal needs, he begins to think about the public good. We need to make them believe that they can realize their potential in Ukraine. They should see strong infrastructure, healthcare, high employment. We are not against them leaving abroad to gain new knowledge and experience, but we want them to return, for them and their children live in Ukraine

- Let’s move on to sports. This year, Ukraine has shown quite good results at the Olympics and the UEFA European Football Championship. By the way, one of the most successful Ukrainian athletes at the Olympics is an ethnic Azerbaijani. How did you manage to achieve these results?

- Yes, for the first time in the history of the European Championships we were among the eight strongest teams. But before that, we played in the quarter finals at the World Championship. This is the success of the team, federation, individual players, coaches. The result doesn’t come in one day, you have to work for years to get it. Your compatriot Parviz Nasibov has achieved significant success. We believed in him, invited him to the last licensed tournament, he won the tournament and received a license, won a silver medal in Tokyo.

- Let’s get back to my question. Why were there no such achievements in football before?

- I answered your question. The result doesn’t come immediately. The achievements of this year are the fruits of many years of effort and painstaking work. Everything has its time.

- What caused the departure of Andriy Shevchenko from the post of head coach of the national team?

- That was his own decision. Shevchenko signed a contract not with the ministry, but with the Football Federation of Ukraine.

- In recent years, professional Ukrainian athletes have left the country, representing other states, including Azerbaijan. As you know, Iryna Kindzerska won a silver medal at the Olympics in judo competitions. How do you intend to keep this outflow of experienced athletes?

- This is a personal matter, the choice of each individual athlete. As far as I know, Iryna found her happiness in Azerbaijan, she started a family.

- What about Maria Stadnik?

- Maria has been playing for Azerbaijan for about 10 years. She chose Azerbaijan, someone will choose another country, this is everyone’s personal business.

- Are there any innovations expected in cooperation with Azerbaijan in the sports field?

-We were close friends with the late minister of sports. At the invitation of the President, I took part in an event timed to coincide with the 15th anniversary of the Olympic Committee of Azerbaijan. We are bound by the ties of friendship with Azerbaijan. Your fencing team is coming to Ukraine for training camps. Many federations of our countries interact with each other, hold joint training camps.

- Have you contacted the new minister?

- No, I haven’t had such an opportunity yet.

- So far, nothing of the kind has been discussed. An agreement on cooperation in the field of youth policy and sports at the intergovernmental level has been signed between Azerbaijan and Ukraine. As part of this agreement, a specific action plan was envisaged. However, in 2020, everything froze due to the pandemic. Unfortunately, Azerbaijan is closed for visits by Ukrainian citizens, since Ukraine is in the red zone for Azerbaijan. There may be certain exceptions for government delegation. We are working on a new action plan under the agreement.

The pandemic has made serious adjustments to our plans, certain projects remain in the initiative format. Until 2019, the National Council of Youth Organizations of Azerbaijan had been very active, it had implemented a huge number of projects in Ukraine. However, with the onset of 2020, these ties were interrupted.

By the way, I would like to note that the representative of Azerbaijani youth in Ukraine Dinara Habibullaeva is a member of the Kyiv City Council.