Armenian terrorists: We intended to put up armed resistance to Azerbaijani servicemen

Armenian terrorists: We intended to put up armed resistance to Azerbaijani servicemen He said that he and others were not pressured after being detained by the Azerbaijani Armed Forces: "We were treated humanely during our detention. 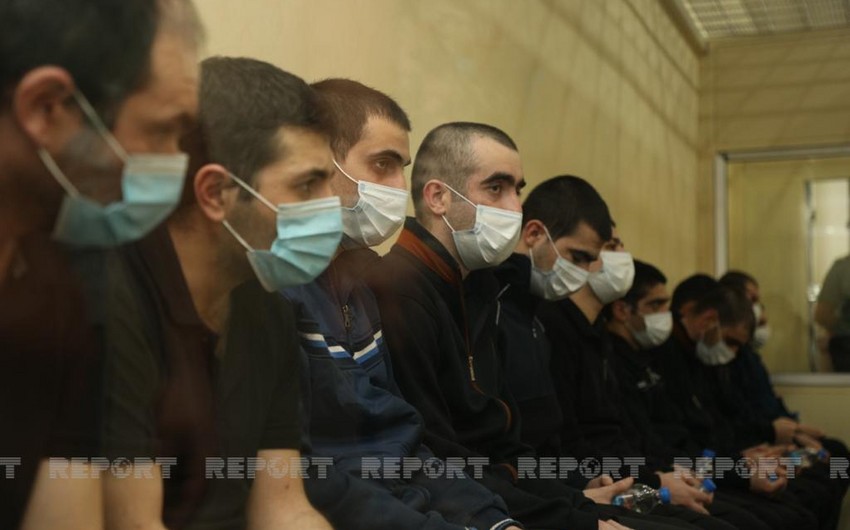 According to Report, the accused Petrosyan was interrogated at the trial chaired by Judge Afgan Hajiyev.

Later, another defendant, Gasparyan, testified in court. During interrogation, he noted that he was called to the military commissariat in Gyumri in November last year:

"We went to Lachin, then settled in the mountains in the direction of Hadrut. When we came down the mountain, we were detained by the Azerbaijani Armed Forces, and we surrendered our weapons to them."

Answering the prosecutor's questions, Gasparyan said that they passed Russian peacekeepers with their weapons in the direction of Lachin.

His testimony to the investigation was announced in court. During the interrogation, he stressed that their goal was to put up armed resistance to anyone who came to their territory from Azerbaijan.

Later, Minasyan, Sefilyan, Bagasyan and, Yengoyan were also interrogated. They testified in the same way as the other defendants.

There was a discrepancy between the testimony of each of the accused during the investigation and the testimony given in court. Their testimonies have been announced.

They emphasized that they were ordered to put up armed resistance if the servicemen of the Azerbaijani Armed Forces approached the area.

The judge said that there were two witnesses in the criminal case: "They will also be summoned to the next court hearing."

The next hearing is scheduled for July 2.

Members of the illegal armed formation illegally entered the Azerbaijani territory, took a position in the forests in the Khojavand region's Hadrut village, and committed terrorist, subversive, and other criminal actions against the Azerbaijani military personnel and civilians. The members of these armed formations illegally crossed Azerbaijan's state border on November 26-27, 2020. As an organized group, they took up combat positions in the forest and other areas in the north-western part of the Khojavand region's Hadrut village.

The formation members were disarmed in the State Security Service's (SSS) anti-terrorist operation on December 13, 2020, after the announcement of a ceasefire agreed upon by Azerbaijan, Russia, and Armenia in a trilateral statement made on November 10, 2020. The preliminary investigation into the criminal case against them, initiated by the Investigation Department of the SSS, has been completed.