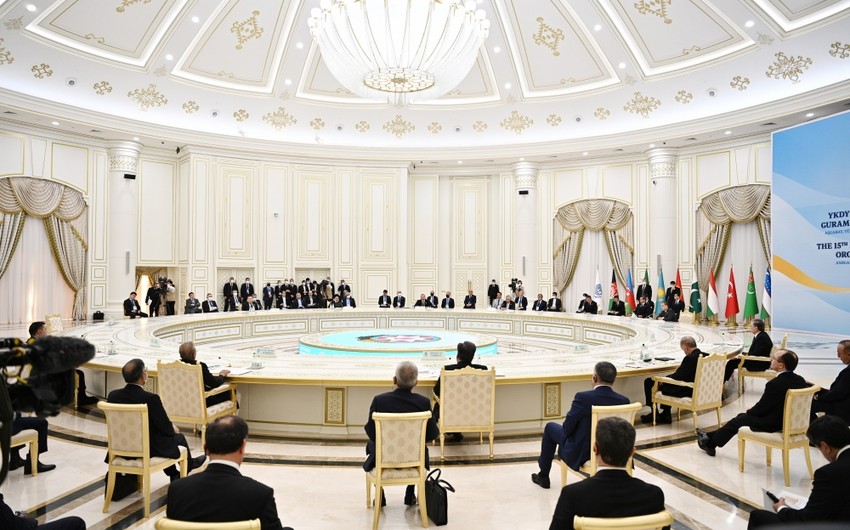 The 15th Summit of the Economic Cooperation Organization (ECO) has been held in Ashgabat, the capital of Turkmenistan, informs via Azertag.

President of the Republic of Azerbaijan Ilham Aliyev attended the Summit.

The heads of state posed for photographs.

President Gurbanguly Berdimuhamedov then welcomed other guests who arrived in Turkmenistan to attend the 15th Summit of the Economic Cooperation Organization.

The heads of state and government posed for a group photo.

Addressing the event, President of Turkey Recep Tayyip Erdogan said that the ECO chairmanship passed on to Turkmenistan.

The event then heard speeches from other participants.

President Ilham Aliyev made a speech at the Summit.

Distinguished Heads of State and Government,

I would like to express my gratitude to my brother, President of Turkmenistan Gurbanguly Malikguliyevich Berdimuhamedov for the hospitality and congratulate Turkmenistan with successful chairmanship in the Economic Cooperation Organization.

Using this opportunity, I would like to congratulate brotherly Uzbekistan for assuming the ECO chairmanship and wish every success in leading the Organization.

Azerbaijan is an active member of ECO. Our relations with the ECO Member States are based on friendship and mutual respect.

We also enjoy fruitful cooperation with the ECO Member States within international platforms, including the Organization of Islamic Cooperation and the Non-Aligned Movement.

During the 14th ECO Summit this March, the Charter of the ECO Research Center was signed. I express my gratitude to the Member States for supporting the initiative of the late President of Azerbaijan, Heydar Aliyev. Azerbaijan will do its utmost for the efficient functioning of the Center based in our country. I invite remaining Member States to join this important initiative.

Over the past 18 years, the economy of Azerbaijan has developed rapidly, and the gross domestic product increased more than three times.

Azerbaijan has achieved a favourable investment climate as a result of large-scale reforms. Azerbaijan is placed 28th out of 190 countries in the World Bank's Doing Business survey. Around $280 billion has been invested in Azerbaijani economy, half of which is foreign investment.

Azerbaijan's external debt accounts for only about 17.3 per cent of its gross domestic product. By the end of 2030, we plan to decrease it to 10%.

During the last 18 years, the poverty rate in Azerbaijan has decreased from 49% to 6%. The unemployment rate in the country is around 6%.

Azerbaijan's achievements are highly appreciated by the international institutions. The Davos World Economic Forum report ranks Azerbaijan in the 10th place for the long-term government strategy and 5th in the world in terms of the leadership's commitment to reform.

As to the COVID-19, Azerbaijan has launched an immunization campaign since mid-January this year. Over 60 per cent of adult population in the country has received two shots.

So far, almost $3 billion of socio-economic stimulus package has been released to support COVID-affected people and business in the country. For the same purpose, $ 1.6 billion of financial assistance package will be allocated from the state budget in 2022.

Azerbaijan is making significant steps to mobilize global efforts against the pandemic. We have been persistently stressed our firm opposition against "vaccine nationalism".

This year, upon Azerbaijan’s initiative in its capacity as the Chair of the Non-Aligned Movement, resolutions on ensuring equitable access for all countries to vaccines were adopted at the UN Human Rights Council and the UN General Assembly respectively.

Furthermore, Azerbaijan has provided financial and humanitarian assistance to about 80 countries directly and through World Health Organization to support their fight against the coronavirus.

In 2020, Azerbaijan put an end to nearly 30 years of occupation of its territories by Armenia. The 44-day-long Patriotic War resulted in Armenia's defeat and being forced to sign an act of capitulation on 10 November 2020. Azerbaijan restored its territorial integrity. Azerbaijan itself ensured the implementation of UN Security Council resolutions of 1993 demanding immediate, complete and unconditional withdrawal of armed forces of Armenia from occupied territories of Azerbaijan.

All cities and villages, including cultural and religious heritage sites of Azerbaijan have been totally wiped out by Armenia during the occupation. In total disrespect and hatred to all Muslims, Armenia has destroyed and desecrated our mosques, including by using them as stables for pigs and cows. 65 out of 67 mosques situated in the formerly occupied territories have been totally destroyed and the two remaining have been seriously damaged. Likewise, the graveyards have been vandalized.

We started large-scale reconstruction work immediately after the liberation, which has already yielded initial results. Azerbaijan is building new cities and towns from the scratch relying solely on its own financial resources. To that end, $1.3 billion has been released from the state budget this year. At least, the same amount will be allocated for this purpose in 2022.

important part of the East-West and North-South corridors. I am confident that ECO Member States will benefit from this corridor.

Thank you for your attention.

The 15th Summit of the Economic Cooperation Organization (ECO) kicked off in Ashgabat, Turkmenistan, on November 28, Report informs.

President of the Republic of Azerbaijan Ilham Aliyev is also taking part in the summit.

The heads of state took a photo.

President Gurbanguly Berdimuhamedov also welcomed other guests arriving in Turkmenistan to attend the 15th Summit of the Economic Cooperation Organization.

Then, the heads of state and government took a photo together. 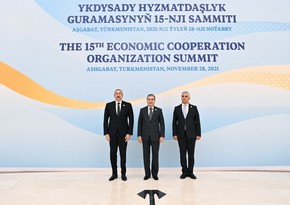 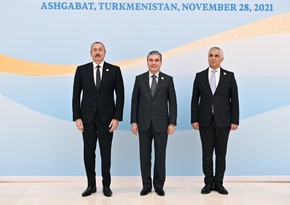 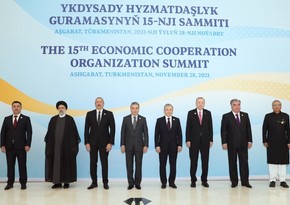 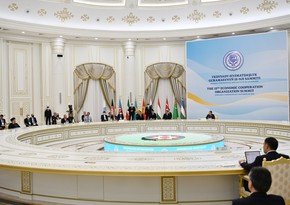 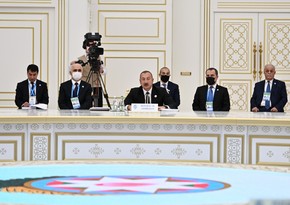 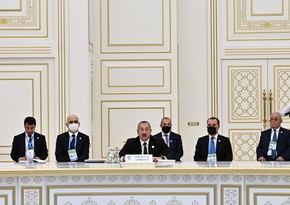 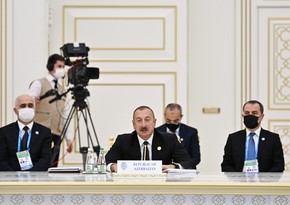 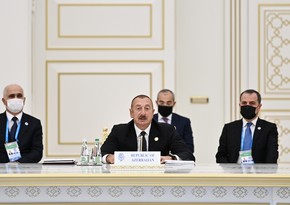 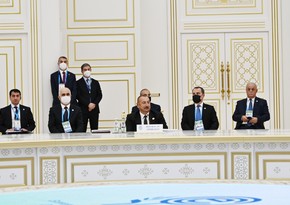