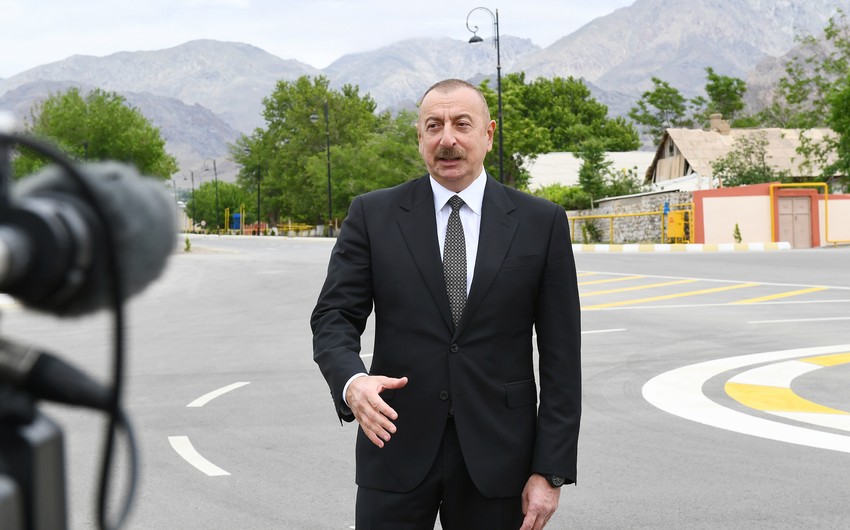 “The conflict has been resolved, this is one thing. I believe that the parties involved in this issue and the countries that want to deal with this issue – I do not know for what reason – should take this into account,” Azerbaijani President Ilham Aliyev said on May 10 in an interview with AzTV during his trip to the Nakhchivan Autonomous Republic, Report informs, citing .

“Because sometimes countries located at the other end of the world make statements about this conflict or the processes taking place in Azerbaijan. This is unacceptable.

I can refer to Canada as an example. I was recently informed that the Canadian Ministry of Foreign Affairs had made a statement on Azerbaijan and our internal affairs. What right does it have to do that? Who gave it such a right? What does Canada consider itself to be? Is it perhaps a superpower we didn’t know of. It is probably a second Luxembourg, a second superpower we didn’t know of. Let them mind their own business,” the head of state said.

But what about the Ministry of Foreign Affairs? Doesn’t it reflect the position of the government? What kind of statements are these? Let them go and mind their own business. This ugly campaign against Azerbaijan over this Military Trophy Park must be stopped. A French museum displays the skulls of slain leaders of the Algerian National Resistance Movement. Go and look in the mirror-how many more times do I have to say that? I have to say this to journalists, foreign journalists, foreign politicians. And I will keep saying that. I will not remain tight-lipped. But they should mind their own business. They are up to their neck in problems. They have thousands of problems,” the Azerbaijani president said.

“All processes in Azerbaijan are moving in a positive direction. Therefore, I want to say again that if all countries mind their own business and not try to interfere in our work, things will go well and there will be no problems in our relations,” the head of state added.