Hikmet Hajiyev: "Any thinking about revenge in Armenia will be their next historic mistake"

Hikmet Hajiyev: "Any thinking about revenge in Armenia will be their next historic mistake" "Upon the President's tasks and instructions, large-scale reconstruction work is being carried out in the liberated territories of Azerbaijan," Assistant to President of Azerbaijan, the head of the Foreign Policy Affairs Department of Azerbaijan's Preside 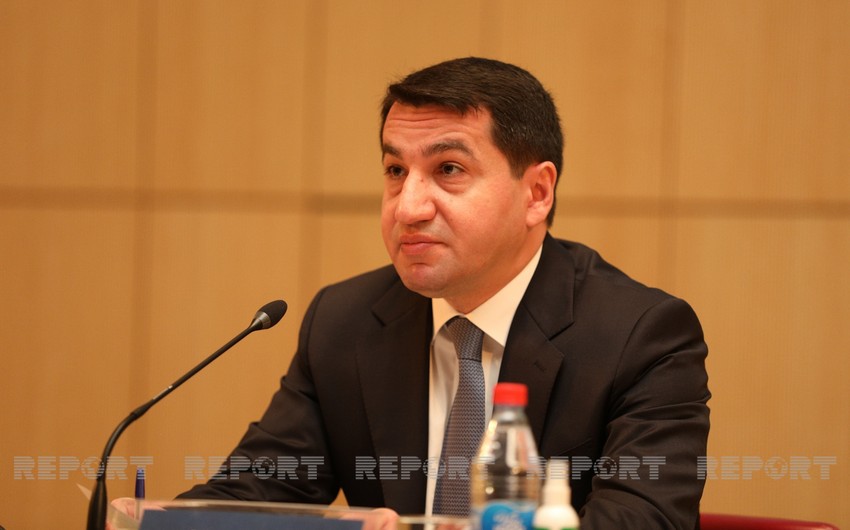 "Upon the President's tasks and instructions, large-scale reconstruction work is being carried out in the liberated territories of Azerbaijan," Assistant to President of Azerbaijan, the head of the Foreign Policy Affairs Department of Azerbaijan's Presidential Administration Hikmet Hajiyev told Haber Global, Report informs.

He also mentioned the Victory Road to Shusha city: "However, as President said, the goal of the Azerbaijani state is to return the IDPs to their homes safely and honorably as soon as possible. He said that we were working against time, but our people and state want our IDPs to return to their ancestral lands."

The Assistant to President said that Armenia needs to have normal ties with its neighbors: "Maybe Armenia does not need ammunition, bullet today. Armenia buys weapons, wants to form an army. We think that such actions are nothing but an attempt by Armenia to console itself. Any thinking about revenge in Armenia will be the next historic mistake. Azerbaijan has ensured its territorial integrity and will continue to protect its borders and the security of its citizens."

"Trilateral negotiations are underway to open the Zangazur corridor. The opening of the corridor is a part of the tripartite agreement signed on November 10. Therefore, Armenia has a commitment in this regard. Consequently, there will be a good opportunity for everyone to improve relations in the region. Unfortunately, we see illogical opinions in Armenia in this regard," – Hajiyev added.

The Assistant to President said that during the 30-year conflict, Armenia obviously destroyed Azerbaijan's cultural and Islamic heritage: "We repeatedly appealed to UNESCO. However, they said in response that they were not a political organization, the Minsk Group was interested in the issue, and UNESCO was not able to deal with this issue. Buildings can be reconstructed, but it is not easy to restore cultural heritage, especially historical heritage. It is an integral part of not only Azerbaijan but also world culture. UNESCO had expressed some readiness to visit the region. We are ready to receive them. The Convention on the Protection of Cultural Heritage in the Event of Armed Conflict should be the basis and give them a mandate. On this basis, all our cultural heritage must be assessed, the damage caused to them must be assessed and presented to the international community."