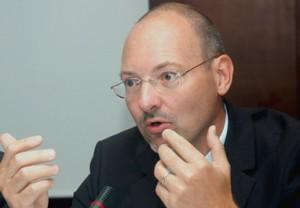 Baku. 14 November. REPORT.AZ/ The European Union (EU) will be represented in the 7th ministerial meeting within the framework of the "Heart of Asia - Istanbul Process will be held in Baku on November 30-December 1.

Report informs, Head of the European Union Delegation to the Republic of Azerbaijan Kestutis Jankauskas said.

According to him, special envoy of the European Union for Afghanistan Roland Kobia will arrive in Baku to attend Senior Officials Meeting (SOM)  within the framework of the "Heart of Asia - Istanbul Process.

Notably, earlier, Kobia was the head of the EU representation in Azerbaijan.

The main theme of the ministerial meeting in Baku will be “Security and economic ties in the" Heart of Asia "”region.

Notably, Azerbaijan is currently co-chairing the process along with Afghanistan.

The ministerial meeting will also be attended by other high-ranking guests from the participating countries of the initiative, including Afghan president Mohammad Ashraf Ghani.