Azerbaijani FM: Prospects of regional development were seriously compromised During past decades Azerbaijan has been an active ECO member
372 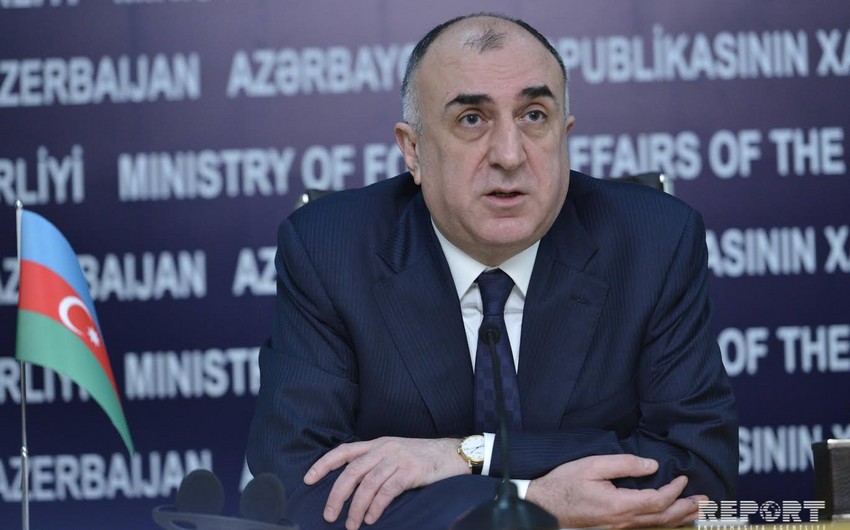 Baku. 20 September. REPORT.AZ/ Elmar Mammadyarov, Minister of Foreign Affairs of the Republic of Azerbaijan made a speech at the Extraordinary Session of Council of Ministers of the ECO Member States, within UN General Assembly 72nd session.

Report was informed in the Azerbaijani Ministry of Foreign Affairs (MFA), he has expressed gratitude to the ECO Secretariat for organization of the event.

"Today’s meeting is a good opportunity for exchange of views on recent activities within our Organization and for practical discussions and taking decisions which can make our organization more efficient.

As the global economy is shifting into new era of the substantial uncertainties in commodity price trends, a longer term national development planning becomes more difficult both for suppliers and buyers. This instability affects inter alia the availability of the financial resources that should be mobilized to serve the goals of our economies.

At previous Council Meetings we stressed the necessity to find creative ways and means to improve the existing mechanism of cooperation within organization. We are of view that special emphasis, in this context, should be placed on efforts towards trade and transport facilitation, including simplification of border crossing procedures.

During past decades Azerbaijan has been an active ECO member and supporter of the organization via hosting various level events, including 2 Summits and ministerial gatherings, as well as an initiator and contributor for important initiatives.

This year Azerbaijan hosted “3rd high level working group meeting on Gazvin-Rasht-Astara (Iran)-Astara (Azerbaijan) railway project”, “The 13th Meeting of the Heads of ECO Railway Authorities, “7th meeting of Railway Committee of TTCC (Transit Transport Coordination Council) and “3rd Meeting of Heads Anti-Corruption Organizations and Ombudsmen of ECO Member States”. We also are planning to host this year the “2nd ECO Ministers of ICT” and “6th meeting ECO Postal Authorities” that will contribute to cooperation on this field among member countries.

Trade potential is closely linked to the issues of transport and connectivity. To enhance the competitiveness of the region both as producer, market and transit corridor, development of the regional infrastructure shall be properly addressed.

Due to its strategic role of a natural bridge between Asia and Europe, Azerbaijan has always been an active participant and key enabler of regional and trans-regional connectivity initiatives. Today Azerbaijan has involved in implementation of several major projects to promote East-West and North-South corridors.

As part of East-West international transport corridor the implementation of the strategic Baku – Tbilisi – Kars project (BTK), railroad connection between Azerbaijan, Georgia and Turkey will facilitate regional trade, uninterrupted railway access between East and West. The opening ceremony of this project is scheduled to be held on 28 October 2017, and it is expected that the railway will be put into full operation in the nearest future.

In 2016 we launched the first container train starting from China crossing Central Asia, Caspian Sea further to Azerbaijan and Georgia with destination to Europe. This test train proved that this route can reduce the transit period from 30-35 to 15 days. Azerbaijan is also embarking on another remarkable project - construction of a new Baku International Sea Trade Port (Alyat) – the biggest and multi-purpose port in the Caspian Sea with potential capacity of handling 25 million tons of cargo annually. Standing at the intersection of railroad connections to Europe, Russia and Iran, and in close proximity to Baku airport the Alyat Port will allow seamless connection to regional hinterland and air cargo, as well as cost effective rail ferry access to other Caspian Sea ports.

Azerbaijan is also an active enabler of International North-South Corridor which will allow transportation of goods from Northern Europe and Russia to the countries of the Persian Gulf, India and beyond. The construction of Qazvin-Rasht segment (164 km) was almost completed and the Astara-Astara segment of Astara section in Azerbaijan up to the border as well as construction of bridge over Astara Chai River has already been completed. The construction of only missing link – a segment between Rasht-Astara is yet to be completed for which both countries are performing negotiations on its co-financing. Upon successful commissioning this project will make a significant contribution to regional cooperation via connecting Azerbaijani, Russian and Iranian railroads.

For most of our countries, tourism represents almost untapped resource. Our region is a cradle of many civilizations and played a central role in the world’s cultural and scientific endeavors for centuries. We should commoditize tourism in our region and deliver attractable and user friendly product both for our own population and the rest of the world. Since our last meeting, Azerbaijan has taken significant steps in this direction.

Continued cooperation among the member states is necessary to build and run information infrastructures in order to bridge the digital divide in the region and in this regard to contribute to realization of Trans-Caspian Information Super Highway Project (TASIM), which was supported by UN resolution. Realization of the project is expected to give the countries involved, such benefits as improved regional and global connectivity, route diversification, improved disaster resiliency, bridging digital divide and contributing to Sustainable Development Goals (SDGs) and contribution to regional innovation and modernization. In this regard, we call upon the ECO Member States to support this initiative, which will provide high quality access of ECO members to international network.

The issue of regional energy cooperation has now come to the fore in the ECO Region. Several positive achievements have so far been reached in this area, notably the establishment of the ECO Regional Electricity Market.

Through initiating and implementing sustainable energy projects Azerbaijan has established itself as a reliable energy supplier and become a vital bridge between Asia and Europe. Today Azerbaijan is a key enabler of the Southern Gas Corridor (SGC) – one of the largest infrastructure and energy projects in Europe with its main two components such as Trans Anatolian Pipeline (TANAP) and Trans Adriatic Pipeline (TAP) aimed at transporting hydrocarbon from the Caspian basin to Europe. Realization of these energy projects will diversify the energy sources, as well as enhance security of energy supply and transportation within the region and beyond.

Azerbaijan supports the reforming process that through joint efforts can provide a possibility for elaboration of actions for further development of the ECO. The new “ECO Vision 2025” needs to reflect the interests of all Member States. This reforming process should aim to enhance efficiency of current institutions and activities within ECO.

Maintaining security and stability is a crucial component in building successful society and regional cooperation. Regrettably, since our last meeting stability and security in our region became even more fragile, new conflict hotbeds emerged and prospects of the region’s development were seriously compromised. We have witnessed more human tragedies with many lives lost or maimed, and the millions forced to leave their homelands.

Unfortunately, Armenia continues its occupation of 20% of the Azerbaijan’s internationally recognized territories thus undermining the regional security and stability as well as impedes full-fledged regional cooperation. Armenia went even further in its aggression policy now trying to associate other countries with the illegal occupation through attracting businesses, trade and investments in the occupied territories of Azerbaijan.

It is very important for our cooperation, that all countries are aware of such intentions of Armenia and reject any type of social, economic and cultural involvement in the occupied territories of Azerbaijan. I call all ECO Member States to prevent any attempts to engage in trade, economic and investment activities in or with the regime on occupied territories of the Republic of Azerbaijan.

Withdrawal of Armenian military forces from the occupied territories of Azerbaijan and ensuring the return of the refugees and internally displaced persons to their homes will not only contribute to peace and security in the South Caucasus but also enhance full-fledged intra-regional cooperation".