Azerbaijani FM: “Mere impunity in past will sow a seed of graver crimes in future”

Azerbaijani FM: “Mere impunity in past will sow a seed of graver crimes in future” Baku. 14 May. REPORT.AZ/ “Today, the situation of refugees and IDPs remain the most complicated and problematic in the countries concerned. Using this opportunity, I would like to commend the efforts made by Turkey, Lebanon and Jordan who took the heaviest burden in providing most urgent, albeit temporary haven for those fleeing from the conflict areas”. 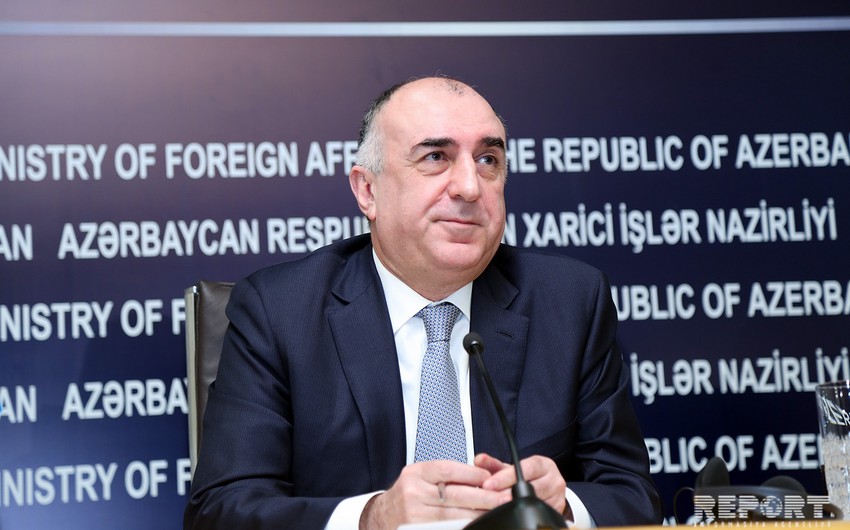 Baku. 14 May. REPORT.AZ/ “Today, the situation of refugees and IDPs remain the most complicated and problematic in the countries concerned. Using this opportunity, I would like to commend the efforts made by Turkey, Lebanon and Jordan who took the heaviest burden in providing most urgent, albeit temporary haven for those fleeing from the conflict areas”.

Report informs, Minister of Foreign Affairs of the Republic of Azerbaijan Elmar Mammadyarov said at the International Conference on the Victims of Ethnic and Religious Violence in the Middle East.

Foreign Minister stressed that, taking into account the magnitude of internal displacement in the world, when the number of IDPs reached 41 million according to the UNHCR report, dignified return of IDPs is crucial and we are glad that, there are common understanding and support on the importance of return of displaced people to their homes. Azerbaijan fully supports all efforts to raise the awareness on the suffering of IDPs. Our sensitivity to the cause of IDPs is comprehensible, as Azerbaijan has one of the biggest number of IDPs per capita in the world. Displacement in my country was a consequence of the occupation of Nagorno-Karabakh and seven surrounding regions of Azerbaijan by Armenia in a blatant violation of international law. Currently, the number of IDPs and refugees in Azerbaijan exceeds 1 million, which is more than the tenth of the total population.

Despite the large scale of displacement, the Government of Azerbaijan has made remarkable progress in improvement of the living conditions of IDPs. During last twenty years about 6 billion USD was invested to solve social problems of refugees and internally displaced persons, which has resulted in significant decrease in poverty and unemployment among them.

This being said, we should not forget that the full restoration of human rights of forcefully displaced persons and refugees requires their voluntary, safe, dignified and sustainable return to their homes of origin. Unfortunately, in our case, return is still impossible, despite the decades-old legally binding UN Security Council Resolutions demanding for the immediate, complete and unconditional withdrawal of Armenian forces from the occupied Azerbaijani territories and international assistance for return of displaced people to their homes.

Even with the large scale and protracted displacement problem in its territory, Azerbaijan supports the efforts of the international community in addressing urgent humanitarian crisis situations and building sustainable societies in different parts of the world. To date, people in nearly 40 countries of the world, including Yemen, Palestine and Syrian refugees in Jordan became beneficiaries of the humanitarian assistance provided by the Azerbaijan International Development Agency.

As a country with rich and centuries-long traditions of peaceful and harmonious co-existence of adherents of various religions and denominations, Azerbaijan has invested a lot to the establishment of a strong and genuine intercultural and interreligious dialogue both regionally and globally through the Baku process as mentioned in the UN Secretary General report 72/488.

It is obvious that one major obstacle in strengthening public institutions in the countries concerned will be lack of qualified personnel due to the fact that many of them left the country or even worse, were killed during the conflict. In this regard, I would like to draw your attention to the decree of the President of Azerbaijan issued last December on education grants for students from the member states of the Organization for Islamic Conference who wish to study in the Azerbaijani Universities. So, the students from the Middle East countries may well benefit from this opportunity.

As to the other priority areas in the Madrid document, namely the protection of endangered cultural heritage, ensuring justice and fighting impunity, I have to stress that the Baku Declaration adopted at the 7th Global Forum of the UN Alliance of Civilizations strongly condemned any advocacy of religious hatred that constitutes incitement to discrimination, hostility or violence and urged all member states to unite against violent extremism in all its forms and manifestations. We do believe that Baku Declaration should serve as guidelines for states and international organizations in promotion of intercultural dialogue as a means to counter violence, extremism and xenophobia. We addressed international community on countless occasions to take efficient measures to refrain Armenia from devastating cultural and religious sites in the occupied territories of Azerbaijan, and these acts of vandalism happened long before the similar acts in Syria. I should draw your attention to the Resolution of the UN Human Rights Council on Protection of cultural rights and property in situations of armed conflict, which was adopted at the initiative of Azerbaijan more than ten years ago, in 2007, i.e. well before the international community was shocked by the recent atrocities in the Middle East. We should not forget that a mere impunity in the past will sow a seed of graver crimes in the future.