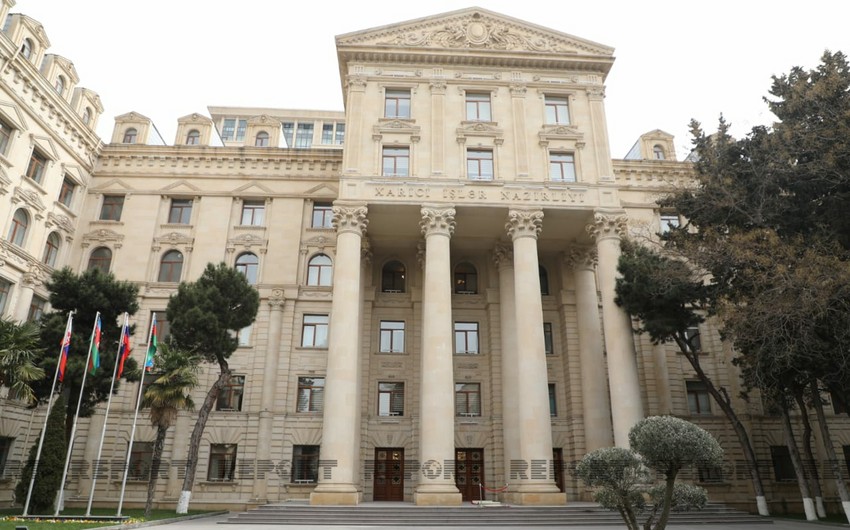 "In such a case, we would like to remind to the opposite side that Armenia, which has been pursuing the policy of aggression against Azerbaijan and keeping a part of its internationally recognized territories under military occupation for nearly 30 years, bears responsibility for such military crimes as the destruction and plundering of historical, cultural and religious heritage, and the smuggling of our cultural wealth from the country," the statement reads.

"Azerbaijan repeatedly applied to UNESCO with the request to send a mission to the region to investigate these crimes. It was Armenia that obstructed the international missions' visits to the then-occupied territories of Azerbaijan. This fact was reflected in the organization's reports; we recommend that the Armenian Foreign Ministry read the UNESCO's activity report for 2005. The document clarifies that the Azerbaijani government submitted a request for sending a fact-finding mission to Nagorno-Karabakh and other occupied districts. However, it was impossible to fulfill this mission due to the military occupation by Armenia.

"After Azerbaijan liberated its territories from occupation, the international community, including official representatives of states, independent media outlets, as well as nongovernmental organizations and others, saw the scale of deliberate destructions caused by Armenians in these lands. Unfortunately, the policy of lies and false accusations against Azerbaijan pursued by the country that committed unprecedented vandalism and 'cultural cleansing' to conceal its crimes is not new. The Armenian side should finally understand that such a practice has no prospects. Azerbaijan has repeatedly expressed its attitude and called for the acceleration of UNESCO's independent and objective mission in Azerbaijan's territories liberated from occupation. As Yerevan says it does not object to such a mission, we do hope that the mission will be implemented soon and the results of the deliberate policy of terminating our historical, cultural, and religious heritage committed by Armenia in Azerbaijani territories for decades will be recorded," the ministry said.