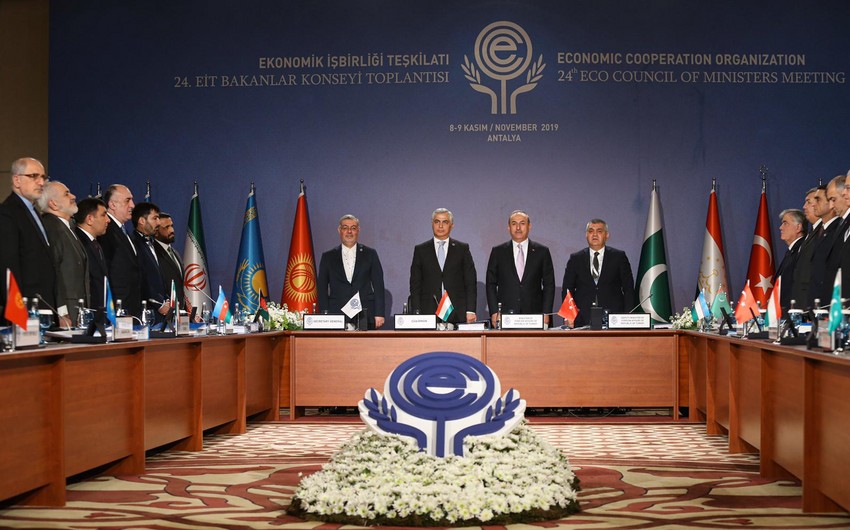 24th Meeting of ECO Council of Ministers has begun in Antalya.

Turkish bureau of Report informs, Azerbaijan is represented at the meeting by a delegation led by Foreign Minister .

At the beginning of the meeting, the film was shown on the activities of the Economic Cooperation Organization (ECO).

First Deputy Minister of Foreign Affairs of Tajikistan Khusrav Noziri spoke about recent projects with member states. Then the speeches of the ECO Secretary General Hadi Soleimanpour were heard.

Following the reports, the national anthem of Turkey was played and the presidency of the organization moved from Tajikistan to Turkey and the meeting was presided over by the country's Foreign Minister Mevlüt Çavuşoğlu.

Notably, the ECO was established in 1985 as an international organization to strengthen economic, technical and cultural cooperation between Turkey, Iran and Pakistan. The organization is the successor to the Regional Development Cooperation Organization, which existed from 1964 to 1979. In 1992, Afghanistan, Azerbaijan, Kazakhstan, Kyrgyzstan, Tajikistan, Turkmenistan and Uzbekistan joined the organization. November 28 is celebrated as ECO Day.