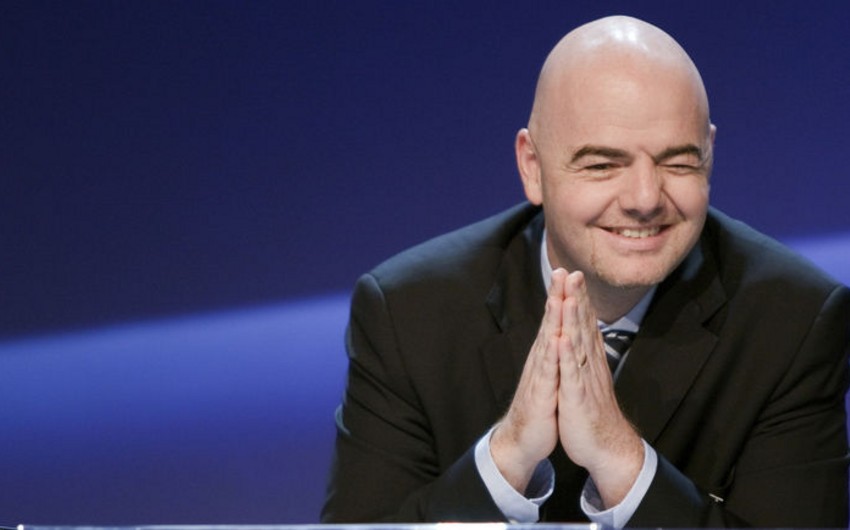 Baku. 20 January. REPORT.AZ/ Gianni Infantino, the UEFA general secretary who is bidding to succeed Sepp Blatter as FIFA president, has proposed staging an expanded World Cupacross several countries as part of his manifesto.

Report informs citing the fifaforward2016.com unveiling his plans, Infantino vowed to increase the amount of income that FIFA spends on football development to 50% and introduce a series of governance reforms to increase transparency and try to restore trust in the beleaguered governing body.

Despite the now banned Blatter making global development the bedrock of his appeal to the narrow constituency of 209 Fifa members, the last Fifa accounts for the four years from 2010-2014 showed only a fifth of its expenditure was invested in football development.

“Fifa and football have a lot at stake in this election. Football means so much to so many people all over the world and makes such a difference to so many lives,” said Infantino.

“It is time for all those that love the game to stand up now and make the right decisions to take Fifa forward. The challenges Fifa faces are huge but I believe that I have the right experience, vision and determination to drive the changes that are necessary.”

The Swiss entered the race to succeed Blatter last year after Michel Platini was suspended over a $ 1.8 m “disloyal payment” received from the former Fifa president. Platini, like Blatter, was subsequently banned from football for eight years.

But he has insisted he is focused only on winning the race. The other three candidates are the Jordanian Prince Ali bin al-Hussein, the South African Tokyo Sexwale and the French former Fifa executive Jérôme Champagne.

In addition to expanding the World Cup to 40 teams, Infantino proposes accepting bids from across a region rather than a specific country. In the wake of Qatar’s successful bid to host the 2022 World Cup, many have suggested it would have been more sensible to stage the event across the Gulf.

“Each confederation shall have to wait at least two editions before being able to host the World Cup again,” he said. “This will ensure a more equitable rotation, while giving every confederation the opportunity to organise this unique event.

“Furthermore, FIFA should investigate the possibility of organising the World Cup not only in one or two countries but in a whole region, so enabling several countries to enjoy the honour and benefits of hosting the World Cup.”