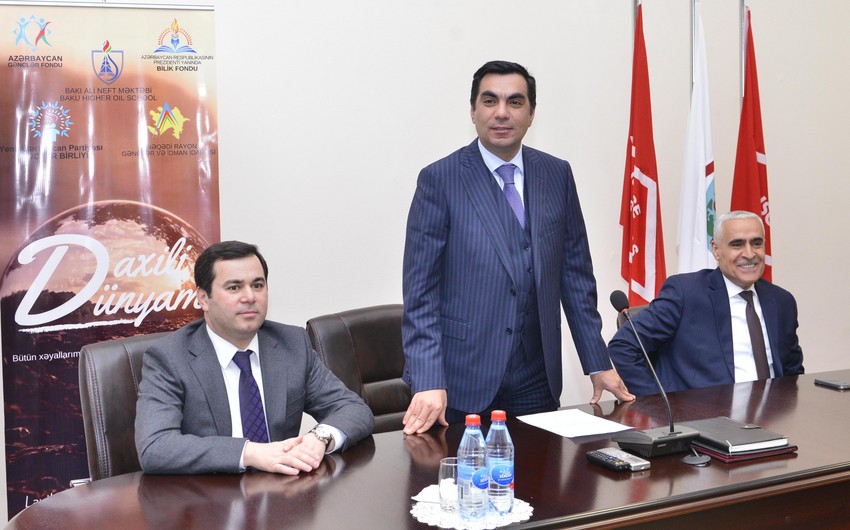 Report was informed in the BHOS press service, opening the event, Rector of the Higher School Elmar Gasimov welcomed the guests and expressed his congratulations to Pakiza Pashayeva. Speaking about importance of the project, he emphasized that such initiatives provide excellent opportunities to young people to help them better understand their inner world and learn how to express themselves. Rector Elmar Gasimov told that the Higher School’s students develop and effectively implement these projects on their own initiative, while the Youth Foundation provides all necessary support and conditions to put their ideas into practice. “Young people carry out activities in all fields of our country’s social life today and play important role in organizing political, economic, humanitarian and social events. As the result of multifold opportunities created by the state for young generation, youth has become one of the key players of the Azerbaijani society,” he said.

Executive Director of the Youth Foundation under the President of the Azerbaijan Republic Farhad Hajiyev stressed out that the Youth Foundation provided constant financial support to implementation of the projects based on young people’s ideas and initiatives. He reminded that BHOS students successfully participated in the contest for grants and many of them won the competition. Farhad Hajiyev said, “This only proves that the Higher School under management of Elmar Gasimov trains highly qualified specialists.”

In his speech, Editor-in-Chief of “Iki Sahil” daily Vugar Rahimzadeh told about the project and said that Azerbaijani youth took rightful place in the society due to knowledge, skills and abilities to realize their potential.

Pakiza Pashayeva provided information about the project objectives and outcomes. She informed that within the project, a video film was made and a book reflecting the participants’ ideas and thoughts about their inner world was published.

At the end of the meeting, the participants of the My Inner World project received certificates of participation.