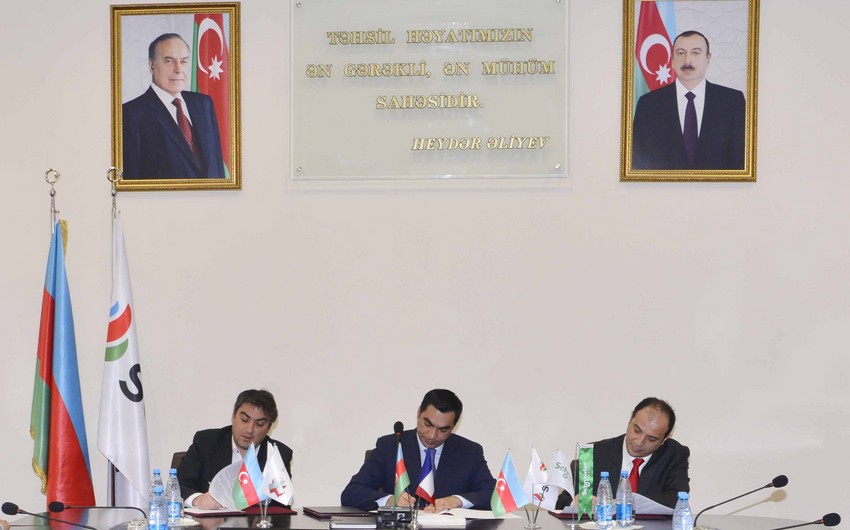 Baku. 7 May. REPORT.AZ/ Baku Higher Oil School (BHOS) signed a cooperation agreement with Schneider Electric and AVANDSIS GROUP. As Report was told in the department of public relations of the BHOS, the signing ceremony was attended by the leadership of BHOS, the delegation headed by President of Schneider Electric for Central Asian countries, and Emrah Tekdemirom delegation headed by Director of AVANDSIS GROUP Hasan Suleymanov, representative of the French Embassy in Azerbaijan Public Relations with universities, Charlotte Paen, as well as the faculty and students of BHOS.

Opening the event with a greeting speech, the Rector of BHOS, Elmar Gasimov welcomed the guests and told them about the overall activities of BHOS and companies, which High School is working with. Speaking about cooperation of BHOS with leading multinational companies in the world, the Rector noted that, these companies provide support for activities at the university. He also stressed the active participation and support that AVANDSİS GROUP recently held in BHOS third student scientific conference dedicated to the 92th birth anniversary of national leader, Heydar Aliyev. Rector E. Gasimov noted that, the conclusion of a cooperation agreement with both companies will play an important role in the training of highly qualified specialists in BHOS with specialty of "automation of engineering processes." Rector added that those ties of cooperation would also provide students the opportunity to gain practical skills and career opportunities.

President of Schneider Electric for Central Asian countries Emrah Tekdemir spoke about the activities of the company. He said that, he represents the company operates in Azerbaijan for more than 10 years. E.Tekdemir expressed satisfaction with the cooperation with BHOS.

Director of AVANDSIS GROUP, Hasan Suleymanov said in his speech that, the BHOS students have the opportunity to join for future for the company and have job security.

The representative of the French Embassy in Azerbaijan on Public Relations with universities, Charlotte Paen speaking on behalf of the Embassy, expressed appreciation of the cooperation between BHOS and companies. She also mentioned about her visit to BHOS in 2013. Charlotte Paen stressed that, a combination of theory and practice is an important factor in the implementation of the educational process. From this perspective Ch.Paen noted that, the agreement will create favorable conditions for students. She added that the students will get the opportunity to study in France as an engineer in the Masters.

Then the ceremony of signing agreements with both companies was held.

The concluded agreements on cooperation will provide the necessary material and technical, scientific and methodological support and implement organizational measures to ensure BHOSin training highly qualified specialists in the specialty of "Engineering of automation processes."