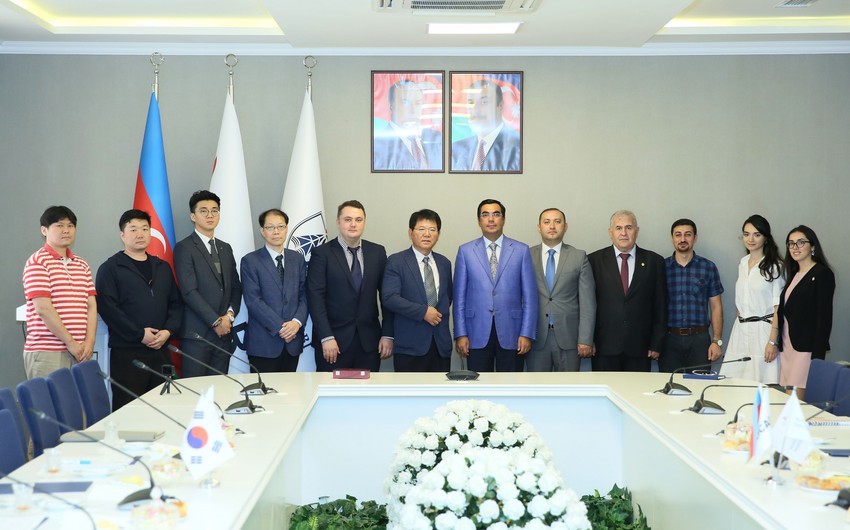 Baku. 3 October. REPORT.AZ/ Baku Higher Oil School (BHOS) hosted a meeting with representatives of HMC Co. Ltd and Kyungsung University (South Korea). It was attended by BHOS Rector Elmar Gasimov, Vice President of HMC Park Gabju and other managers of the company, and professor of the Kyungsung University Park Jung-sik. Dean of the BHOS Engineering Department Zafar Gurbanov, Head of Process Automation Engineering Department Manafaddin Namazov and other key staff members of the Higher School also participated in the meeting.

The main purpose of the meeting was to discuss BHOS participation in the scientific research project developed by HMC company and the Kyungsung University and related to the control of early gas leak detection system with the usage of closed-circuittelevision (CCTV). Rector Elmar Gasimov expressed his pleasure to meet representatives of HMC company and the Kyungsung University again. BHOS rector emphasized the importance of this initiative and said that he would personally supervise the work of the group representing the Higher School in the project. A new center to be established by HMC Co. Ltd at the BHOS campus can provide all necessary technologies and equipment for scientific and research activities to be carried out jointly by BHOS and Kyungsung University in the framework of the project, told Elmar Gasimov.

Vice President of HMC Park Gabju expressed his satisfaction that the project would be implemented in cooperation with the Baku Higher Oil School. He also informed that HMC Co. Ltd operating in the framework of Industry 4.0 and working with artificial intellect would supply modern equipment and latest technologies to the new center at BHOS. It shall be used for the project to be funded by the Republic of Korea and implemented with participation of the Higher School’s Process Automation Engineering Department.

This is the first innovative scientific research project of this kind to be carried out by BHOS. It provides for gas leak detection at very early stages by the latest-generation CCTV cameras and, thus, can offer significant benefits to various industries. It is expected that the project successful implementation will be of interest to largest oil and gas companies around the world.

The project group of BHOS is led by the Dean of the Engineering Department Zafar Gurbanov and is comprised of the Head of Process Automation Engineering Department Manafaddin Namazov, Senior Lecturer of the Department, Head of “Internet of Things” laboratory Abbas Alili and other teachers and students. The project will be implemented in the framework of the Memorandum of Understanding between BHOS and HMC Co. Ltd. signed by the Rector Elmar Gasimov and the company President Park Hak-Joo a while ago.