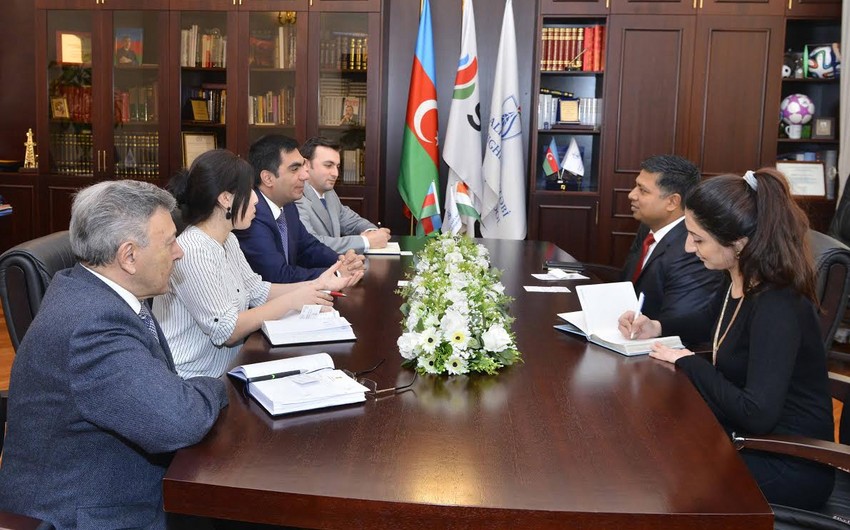 Report was informed in the BHOS press service, Rector Elmar Gasimov welcomed the honorable guest to the Higher School and wished him successful work in his diplomatic mission in Azerbaijan. Rector provided detailed information about BHOS’ history, activities, attainments and latest developments as well as about successes achieved by the Higher School students and academic teaching staff. He also said that BHOS’ management pays special attention to international relations and told about cooperation established with leading universities abroad. Speaking about BHOS strong partnership relations with Heriot-Watt University in Great Britain, the Rector brought the Ambassador’s attention to the opportunities of developing cooperation between the Higher School and universities of India. Elmar Gasimov came up with a proposal to arrange an event at BHOS to be dedicated to Azerbaijani prominent scientist and specialist on drilling oil and gas wells Eyyub Taghiyev who is also known as “Father of Indian oil”. The rector also invited Mr Sanjay Rana to visit the Higher School again and make a presentation.

The Ambassador of India to Azerbaijan Sanjay Rana expressed his gratitude for the warm reception. He highly appreciated the BHOS rector’s proposals and gratefully accepted them. Talking about diversified cooperation between two countries in many spheres, the Ambassador informed about Indian oil and gas companies’ activities in Azerbaijan. He also emphasized importance of forging close bilateral links in the field of education. As Mr Sanjay Rana said, he was very pleased to learn about successes achieved by the Higher School within a short period of time. The Ambassador emphasized that he would take all necessary steps to support establishment of cooperation between BHOS and Indian higher education institutions.

Other issues related to prospects of such cooperation were also discussed including opportunities to provide fellowship to a number of students from India to arrange their education at BHOS.