Ambassador of India: Baku Higher Oil School is one of the most modern educational institutions, both in terms of education system and infrastructure’ 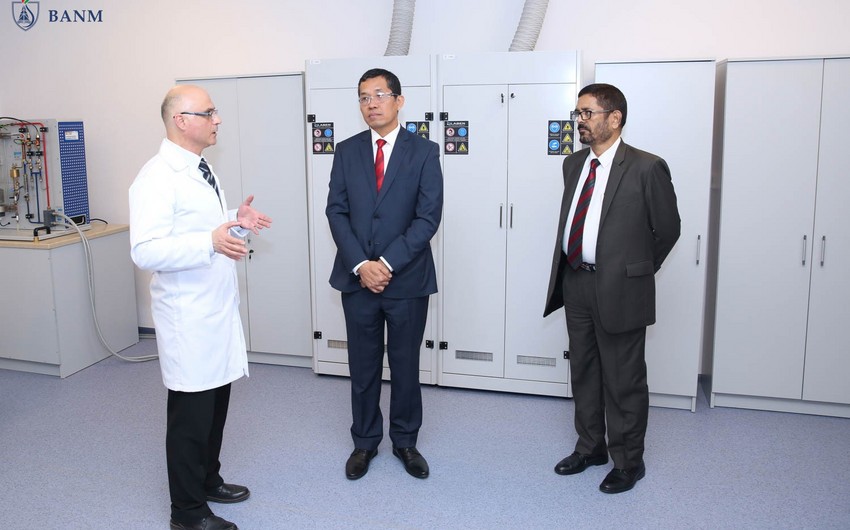 Baku Higher Oil School (BHOS) hosted a meeting with the Ambassador Extraordinary and Plenipotentiary of the Republic of India to the Republic of Azerbaijan Vanlalvavna Bavitlung.

Report informs citing the press service of the Higher School that first, the ambassador got acquainted with the campus, laboratories, classrooms, conference rooms and gyms of Baku Higher Oil School. The guest was informed in detail about the history of creation and development of BHOS, the activity directions of the school, the reforms and innovations implemented at the BHOS, and the successes achieved by the school’s teachers and students.

At the meeting, issues of mutual cooperation were discussed, in particular, the possibility of accepting several Indian students to the BHOS.

BHOS Vice-Rector for Training & Science noted that international relations play a special role in the activities of the school and that the BHOS has always attached importance to cooperation with prestigious universities across the world.

Speaking about Baku Higher Oil School’s cooperation with the British Heriot-Watt University, the vice rector noted the possibility of establishing cooperation between the BHOS and Indian universities.

The Ambassador Extraordinary and Plenipotentiary of India to Azerbaijan Vanlalvavna Bavitlung, in turn, expressed gratitude for the hospitality and the meeting. He praised the proposal to attract Indian youth to study at Baku Higher Oil School and expressed the willingness of the embassy to provide support in this matter.

“We have visited various higher education institutions in Baku and regions. Recently, we have been observing a trend towards modernization in the education system of Azerbaijan. Baku Higher Oil School is also one of the most modern educational institutions in Azerbaijan, both in terms of education system and infrastructure. In particular, our attention was drawn to the fact that all BHOS graduates, without exception, are provided with employment. Every year, 70 million young people graduate from educational institutions in India. Young people are interested in the opportunity to get quality education and employment. In this context, we are ready to provide all the necessary support for establishing cooperation between Baku Higher Oil School and Indian universities,” the ambassador said.