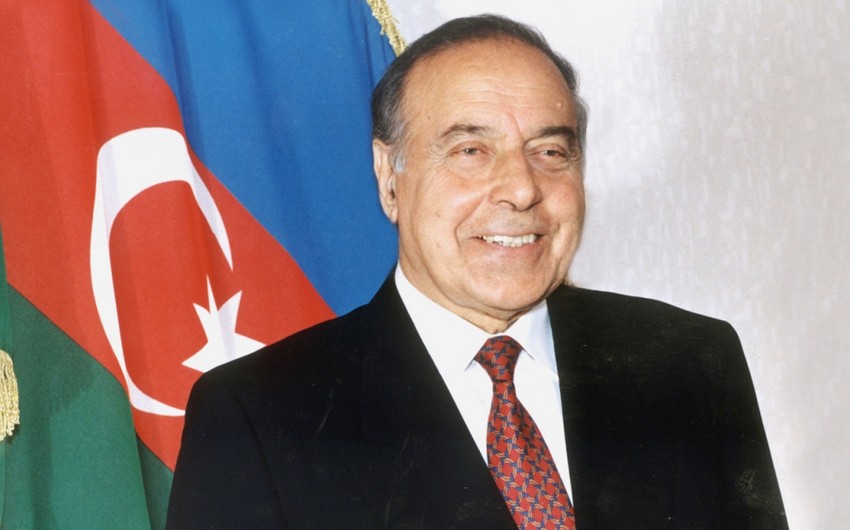 Report reminds, Heydar Alirza oglu Aliyev was born on 10 May 1923 in Nakhchivan city of Azerbaijan. In 1939, after graduating from the Nakhchivan Pedagogical School he studied at the Architecture faculty of the Azerbaijan Industry Institute (present Azerbaijan State Oil Academy). The incipient war impeded to complete his education. In 1941, Heydar Aliyev headed the department at the People’s Commissariat of Internal Affairs of the Autonomous Soviet Socialist Republic of Nakhchivan.

In October 1987, Heydar Aliyev, as a sign of protest against the policy pursued by Political Bureau of the Central Committee of the Communist Party of the Soviet Union and personally the Secretary General Michael Gorbachev, resigned from his post. In bound with the tragedy committed on 20 January 1990 in Baku by the soviet troops appearing in the next day at the Azerbaijan Representation in Moscow with a statement Heydar Aliyev demanded to punish the organizers and executors of the crime committed against the people of Azerbaijan.

As a sign of protest against the hypocritical policy of leadership of the USSR, in connection with the critical conflict accrued in Daghlig Garabagh, in July 1991 he left the Communist Party of the Soviet Union. By return in July 1990 to Azerbaijan, Heydar Aliyev lived in Baku, then in Nakhchyvan, and in the same year was elected a deputy to the Supreme Soviet of Azerbaijan. In 1991-1993, he held the post of Chairman of the Supreme Assembly of the Autonomous Republic of Nakhchyvan, Deputy Chairman of the Supreme Soviet of the Republic of Azerbaijan.

In 1992, at the constituent congress of the New Azerbaijan Party in Nakhchyvan, Heydar Aliyev was elected Chairman of the Party.

On October 11, 1998, having garnered at the elections, passed in high activeness of the population, 76,1 percent of the votes, he was re-elected President of the Republic of Azerbaijan.

Heydar Aliyev, giving his consent to be nominated as a candidate at the 15 October 2003 presidential elections, relinquished to run at the elections in connection with health problems. On December 12 national leader of the Azerbaijani people, President Heydar Aliyev passed away in Cleveland Hospital in the United States of America. The national leader Heydar Aliyev died in Cleveland hospital in the United States on December 12, 2003.

Heydar Aliyev was awarded four times with the Order of Lenin, the Order of the Red Star and with numerous medals. He twice received the title of Hero of Socialist Labor and was awarded with orders and medals of many foreign states. Heydar Aliyev was elected professor and full member of the Academy of Safety, Defense and Legal Norms Problems of the Russian Federation, awarded the premium of Y.V.Andropov. On 10 May 2003 decree was signed on awarding Heydar Aliyev the Order of Saint Apostle Andrey Pervozvanny, the supreme order of Russia.

On 20 January, 1999, President of the Republic of Azerbaijan Heydar Aliyev was awarded the rank of the Honorable Professor of Moscow State University.

On 13 April, 1999, President Heydar Aliyev was awarded the "Peace Premium of Ataturk" Order, the high order of Turkey.

On 27 March, 1997, the head of the state of Azerbaijan was awarded in Kiev the "Yaroslav Mudry" Order, the supreme order of Ukraine.