Azerbaijan cited as secular example in international dialogue on territorial integrity in Ukraine Kyiv hosted an international conference entitled "Territorial integrity - the basis of security and stability" organized by the World Assembly of Diasporas in the United States, the Assembly of Nations of Ukraine, the United Ukrainian Azerbaijanis Congres Kyiv has hosted an international conference entitled "Territorial integrity - the basis of security and stability" organized by the World Assembly of Diasporas in the United States, the Assembly of Nations of Ukraine, the United Ukrainian Azerbaijanis Congress, and the Congress of European Azerbaijanis, Report informs.

European Azerbaijanis, as well as participants from Turkey and Azerbaijan first visited the monument to National Leader Heydar Aliyev in Kyiv and academician Zarifa Aliyeva in Irpin and held a meeting at the Azerbaijani Embassy in Ukraine.

Experts from a number of European countries, Turkey, Azerbaijan, Georgia, and Moldova, as well as representatives of the diplomatic corps, took part in the international dialogue moderated by Yuriy Kochevenko, a well-known Ukrainian expert of Eastern Europe.

Kochevenko said that currently, the main guarantee of security is the protection of territorial integrity, both in Eastern Europe and in neighboring regions. Speaking about the end of the occupation of Azerbaijani territories, he stressed the need for such a dialogue to get rid of the occupation syndrome in Ukraine and other countries. The head of the Assembly of Nations of Ukraine, chairman of the United Ukrainian Azerbaijanis Congress Rovshan Tagiyev said Azerbaijan had guaranteed stability in the South Caucasus by ensuring its territorial integrity: "Europe is currently facing the threat of war in the example of Ukraine, so is in great need of this experience."

The conference read out letters consisting of proposals on national security from the Dutch, Turkish and Latvian parliaments, as well as Leonid Bard, co-chair of the World Diaspora Assembly in the United States. The letters unequivocally point out that ending the 30 years of occupation of the territories of Azerbaijan and ensuring its territorial integrity is a crucial example of territorial integrity and stabiity in the region in the modern period. Counselor of the Azerbaijani Embassy in Ukraine Sabir Rzayev, Second Secretaries of the Embassies of Georgia and Moldova said that the joint activities of the diplomatic corps and diaspora organizations in this mission are a requirement of the time. Chairman of the Congress of European Azerbaijanis Sahil Gasimov spoke about the role of the Diaspora and Azerbaijanis on the continent in this successful mission of Azerbaijan last year. The proposals from the discussions at the conference were collected and officially sent to the representations of international organizations in Ukraine and other European countries.

The event ended with an artistic part from the repertoire of different nations. 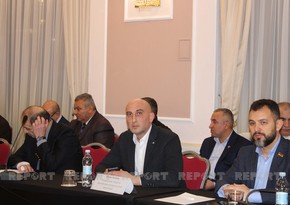