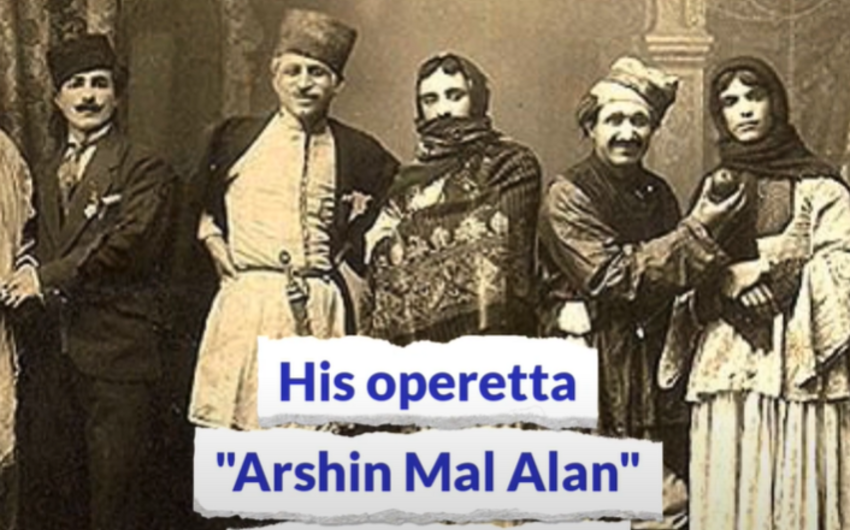 The Consulate General of Azerbaijan in Los Angeles produced a short film in English on renowned Azerbaijani composer Uzeyir Hajibeyli - the founder of the first opera and operetta in the Muslim world.

The film mentions that Hajibeyli was born on September 18, 1885, in Azerbaijan's Qarabagh region and was raised in Shusha, the cradle of Azerbaijani music, where he studied Azerbaijani Mugham music.

It is stated that in 1908, then the 23-year old Uzeyir Hajibeyli's "Leyli and Majnun," the first opera in the Muslim world, was performed in Baku, Azerbaijan and that in 1913 his operetta "Arshin Mal Alan" (Cloth Peddler) premiered in Baku. It is noted that the operetta advocated for women's rights and emancipation, captivating the audiences soon in many other Muslim countries too.

It is stressed that a feature film, based on his "Arshin Mal Alan," was made in 1945 and translated into 86 languages and shown in 136 countries. Colorized by Heydar Aliyev Foundation, the film premiered in Hollywood in 2015. "Arshin Mal Alan" operetta's largest U.S. performance was held in 2013 in Los Angeles. Moreover, it is mentioned that the City of Los Angeles proclaimed September 18, 2015, as "Uzeyir Hajibeyli Memorial Day."

Considering the importance of short films in the current social media age, the Consulate General has produced 27 short films on different topics about Azerbaijan since 2019. Some of them have been translated into other languages too.