Presentation of “Target Baku. Hitler’s war on Oil” held in Brazil - PHOTO The film provides a totally new approach to the history of World War II, i.e. through the prism of oil Baku. 8 October. REPORT.AZ/ A ceremony has been held at the embassy of Azerbaijan in Brazil to present “Target Baku. Hitler’s war on Oil” documentary shot with the support of the Heydar Aliyev Foundation, Report informs.

Addressing the ceremony, Azerbaijan’s ambassador to Brazil Elnur Sultanov noted that dedicated to the 70th anniversary of the Victory over Nazism, the documentary was produced by Arzu Aliyeva, Chief Producer and Louis Vaudeville, producer, and directed by Robert Mugnerot. He highlighted Azerbaijan`s contribution to the Victory over Nazism. “Azerbaijan accounted for more than 70% of the total oil production and more than 80% of the total fuel production in the Soviet Union in 1941-1945s”, the diplomat stressed.

“Target Baku” took 14 months of substantial research in Azerbaijan, Germany, the US, the UK, France and Russia, with over 200 hours of video materials, photographs and other documents scrutinized.

The film provides a totally new approach to the history of World War II, i.e. through the prism of oil. The documentary also features some unique video snapshots of the WW2 battles never shown to this day in a totally new format of restored color film.

The documentary aroused great interest among the spectators. It will be demonstrated in numerous cities of Brazil.

The presentation ceremony was attended by officials, heads of the diplomatic missions accredited in Brazil, local public and representatives of the Embassy. 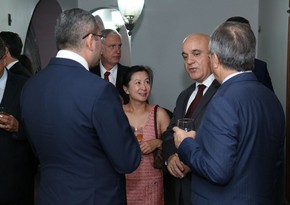 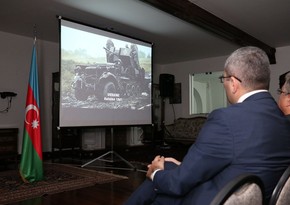