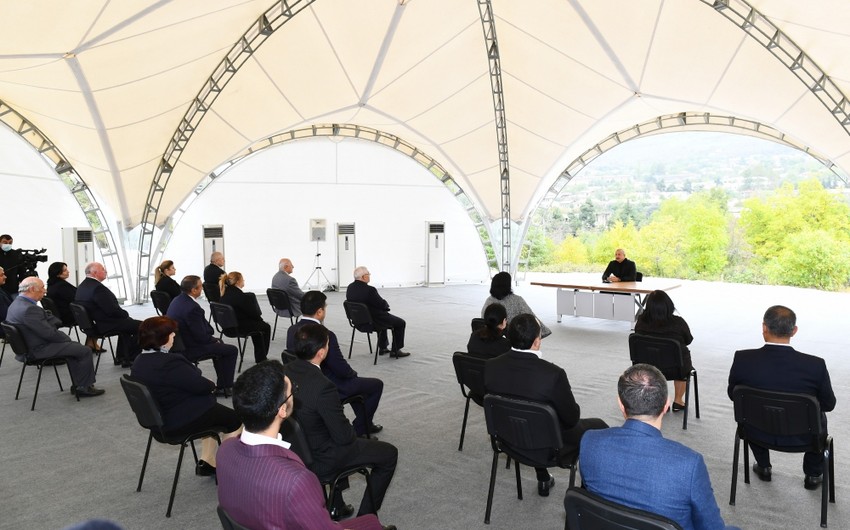 “Historical sites, bridges, as well as the famous Azikh cave and the Taghlar cave – these are located here. The Armenians also wanted to Armenianize the Azikh cave. Look at the level of their nonsense – they claimed that Armenians lived in the Azikh cave. One does not know whether to laugh at this or not,” Azerbaijani President Ilham Aliyev said at a meeting with members of the general public of Khojavand district on Oct. 9, Report informs.

The head of state noted that it was Azerbaijani archaeologists who discovered the Azikh cave:

“Those archaeologists did a lot of research, while Armenians simply brought scientists from several countries of the world for propaganda and staged a show here. The cave was badly damaged. Last time I was here, I went up to the entrance of that cave. I would like to invite Azerbaijani and foreign investors to build tourist centers and hotels in these places, which are so rich in historical sites. Because there are only a handful of such beautiful places in the world as Khojavand and Hadrut settlement. Pristine nature is almost intact here. Armenians cut down our forests in Kalbajar, Lachin and other places.

About 60,000 hectares of forest in Kalbajar, Lachin and Zangilan districts have been completely destroyed, cut down and burned. This also happened in Jabrayil too, but not here. Therefore, nature is almost untouched here. Also, there was virtually no population here. Hadrut may have been inhabited by a thousand people. There was no population. Therefore, we must protect the pristine nature of this region. When our citizens return here, they should, first of all, pay attention to the protection of this nature, and, of course, the state will fulfill its responsibilities.

We have major plans related to the future development of Khojavand district and Hadrut settlement. We started implementing these plans today. Today, the people of Khojavand have come to their native lands and these visits will be more frequent.”