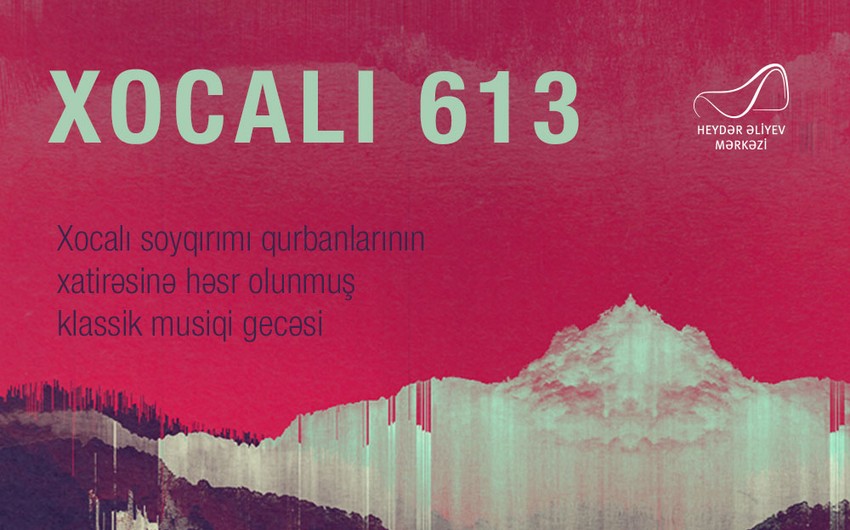 Baku. 19 February. REPORT.AZ/ On February 26, the Heydar Aliyev Center will host a classical music night themed “Khojaly 613” which is dedicated to the victims of the Khojaly tragedy.

Report informs, the music night will feature a serious classic works of Azerbaijani and world composers, as well as symphonic poem of “Khojaly 613”, written by the famous French composer Pierre Thilloy.

The "Khojaly 613" symphonic poem is dedicated to the memory of victims of the genocide committed by Armenians in Khojaly over the night from February 25 to 26, 1992, where 613 innocent civilians were killed by the Armenian armed forces.

This outstanding work ably captures the horror of the Khojaly Massacre, featuring Azerbaijani folk tunes, including Lachin and Sari Gelin, set against a rich orchestral backdrop of military march rhythms and the sounds of conflict. The violin and balaban – which has a plaintive quality, akin to the human voice – represented the soul of the Azerbaijani people that fateful night, with the violin solo section gradually reaching a furious tempo until coming to a sudden, unexpected halt.

Writing about the piece, the composer said: “The Khojaly Massacre ranks amongst one of the most vivid and nightmarish visions in the collective memory of the Azerbaijani people, stemming from the dark, insidious Nagorno-Karabakh conflict that continues to harm an entire people.

The “Khojaly 613” received its world première in Paris on 21 February and was screened in the cities such as London, Madrid, Strasbourg, Ruan, Kolmar, Brussels, Athens, Vilnius, Bern, Geneva, Dublin and Oslo so far.

Works of famous Azerbaijani composers such as "Azerbaijan Capriccio", by Fikrat Amirov, Gara Garayev's symphonic piece of "Matem (Mourning)", "Travel", Don Quixote" by Gara Gayarev and “Adagio for Strings” by the famous American composer Samuel Barber will be also featured during the music night at the Heydar Aliyev Center.