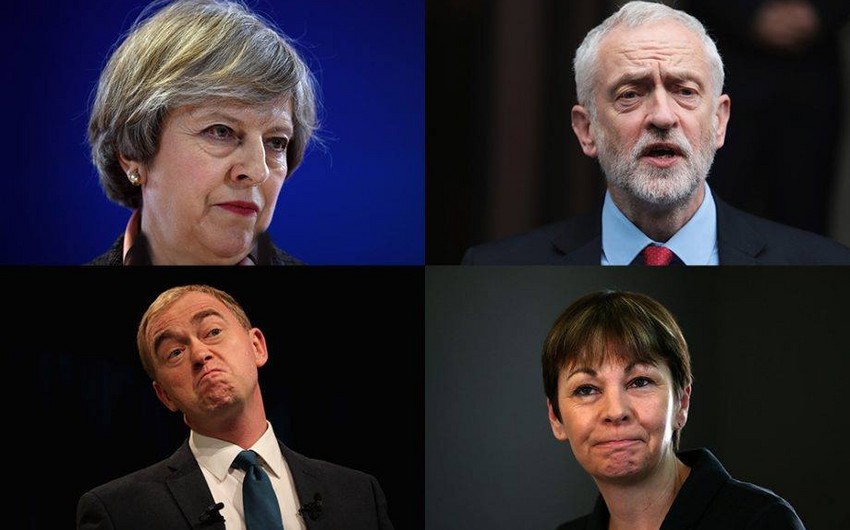 Baku. 9 June. REPORT.AZ/ Extraordinary parliamentary elections were held in the UK. According to preliminary results, however, Prime Minister Theresa May's Conservatives collected over 42% of the votes, she will fail to single-handedly form a government.

The British Parliament has 650 members. To be able to form a government, a political party must win at least 326 of the seats. However, the Conservatives may get a maximum of 316 seats in the Parliament with the mentioned number of members, which gives grounds to assume formation of the coalition government.

The elections were to be held after 5 years. However, Brexit referendum results on June 23, 2016 did not satisfy the ruling party. Then-PM David Cameron resigned and Theresa May took the reins. 52% of voters supported withdrawal of the United Kingdom from the Union, 48% to remain.

Current leader of the Conservatives announced to hold early parliamentary elections in April this year to get majority. However, preliminary results of the elections show the failure.

Elections were held in unfavorable conditions in the UK. Two terrorist attacks were committed in London after launch of election campaign. Undoubtedly, main opposition Labor Party benefitted this situation. Jeremy Corbyn condemned the government of showing weakness in the fight against terrorism, cutting of 20.000 police and security force: “That includes full authority for the police to use whatever force is necessary to protect and save life as they. You cannot protect the public on the cheap. The police and security services must get the resources they need, not 20,000 police cuts. Theresa May was warned by the Police Federation but she accused them of ‘crying wolf’.

Over the past three years, the UK faced two hard situations, one of which was Brexit, the other Scottish independence referendum.

British withdrawal from the European Union had a negative influence on the situation. On March 28, 2017, the Scottish Parliament voted for the second independence referendum.

Thus, new parliament and government again faced with two problems. Of course, one of them is to end withdrawal from the EU. The UK has two years to negotiate its withdrawal. The other is the Scottish problem.

May is believed to hold this post, while Labour has said it will not seek a coalition.

Notably, 68-year-old Jeremy Corbyn is far left and has never served in senior positions. He was one of the initiators of the Irish Republican Army, known as terrorist group earlier and fighting for withdrawal of Ireland from the Kingdom. Corbyn repeatedly accused of antisemitism and criticized NATO. In this regard, the Party is highly unlikely to lead the coalition government. The Kingdom will be put to test for the future, solution of new and old problems under the leadership of the Conservative Party.