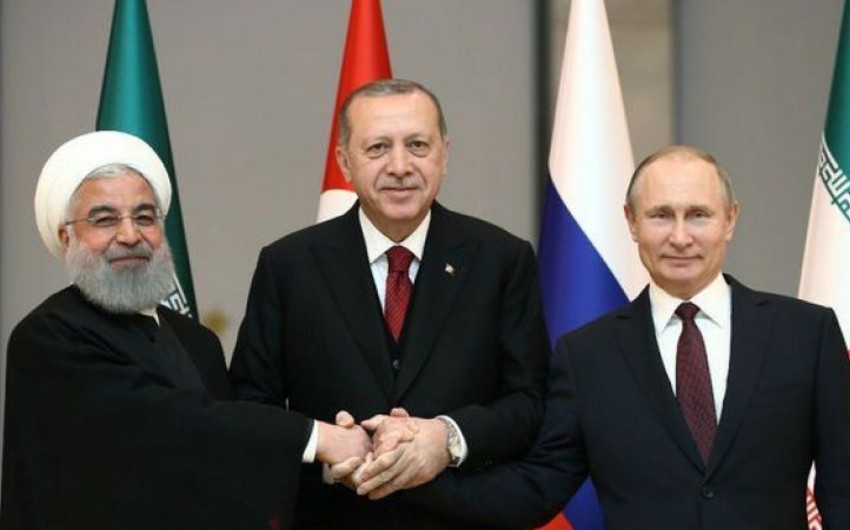 Baku. 6 April. REPORT.AZ/ The events in Syria caused development of new terms in the region, and summit held in Turkey on April 4 once again proved this fact.

It is natural that against the background of pressures applied by the West, the official visit of the Russian President Vladimir Putin to Ankara can be considered as one of the most important international events. In the framework of the visit, the foundation of Tukey’s first Nuclear power plant (NPP) was laid in Akkuyu region of Gulnar region, Mersin province. Turkish President Recep Tayyip Erdoğan and his Russian colleague Putin joined the ceremony by means of video-conference. Erdoğan stated during his speech at the ceremony that they planned to put into operation the first reactor of Akkuyu NPP in 2023. It is expected that construction of the station will cost $ 20 billion. All these financial means will be paid by Russia’s state agencies. Generally, the issue of construction of NPP in Turkey was put on agenda in 1955. The first specific step in this area was made on May 12, 2010. The station will provide approximately 10 percent of Turkey’s total energy production. By the way, currently 192 NPPs are operated in 31 countries of the world, and 55 NPPs are constructed in 16 countries. Turkey is the 4th Muslim country, which will have an NPP after Pakistan, Kazakhstan and Iran. And Putin stated during his speech at the ceremony that the opening of Akkuyu NPP will be dedicated to 100 years’ anniversary of establishment of the Republic of Turkish. In any case, the operation of NPP in Turkey may reduce the country’s dependence on energy carriers in the future and at the same time may give a very strong impetus to development of nuclear physics.

Besides, during Putin’s visit, the agreement has also been reached regarding handover of S-400 jet-driven air defense systems manufactured in Russia earlier than the date specified in the contract, i.e. in July 2019. To be honest, Turkey’s cooperation with Russia in the area of military, atomic and nuclear technologies can only annoy the Western countries feeling jealous on account of this fact. However, Russia and Greece signed interstate agreement about “Extension of weapon system servicing” on April 4.

It is worth mentioning that there are S-300 (S-300PMU-1), Top-M1, Osa jet-driven air defense systems, Kornet-E and Faqot antitank missile systems, Zubr air-balloons of assault landing ships manufactured in Russia and included in Greece’s arsenal of weapons. From this point of view we would like to assess Putin’s visit to Turkey from two visual angles.

What did or will this visit give to Russia? What did or will Turkey obtain from Putin’s visit? It is natural that expansion of cooperation with Turkey being a member of NATO by Russia having faced heavy political, economic and diplomatic sanctions gives extra power to Russia. By this visit, the Kremlin made significant step in the area of improvement of its prestige in the Middle East. Russia has demonstrated its power to exert influence on solution of international conflicts. It can be assumed that Moscow will expand its activities in the Middle and Central East and will get involved more confidently in rivalry with the US in the region. Russia may also gain extra clients in weapons market. AS for Turkey, as a result of this cooperation Ankara will strengthen its arsenal of weapons. Besides, Turkey has managed to draw away Russia from the position of patron of the forcers which threaten territorial integrity of Turkey. At the same time, Ankara begins to develop cooperation with Moscow in the area of energy carriers.

In general, this visit confirmed Turkey’s significant role in the region and the world. This is also mentions in the statement to press made by Ambassador of Germany to Ankara Martin Erdman after ceremony of laying foundation of Akkuyu NPP: “Turkey is the closest neighbor Europe. Turkey is an undeniable partner. It is illogical to look for any alternative to it”. And the declaration adopted in the end of trilateral meeting between presidents of Turkey, Russia and Iran on April 4 once again confirmed inviolability of territorial integrity of the regional states. Regarding the issue of the future of Syria, the parties stated that they had reached an agreement and they would jointly fight against terrorism. In that document, all three states also emphasized that they make a stand against activity of separatists who attempt to violate Syria’s territorial integrity and threaten security of neighboring countries. And at the joint press-conference dedicated to outcomes of the meeting, Iranian President Hassan Rouhani touched upon a very interesting issue related to withdrawal of the US troops from Syria: "The US asks money from Arabic countries in order to stay in Syria". It is worth mentioning that President Donald Trump has given a very contradictive declaration regarding withdrawal of the US troops from Syria. This issue still remains a subject of negotiations. By the way, Donald Trump emphasized in January this year the US has spent $7 trillion on the operations conducted in the Middle East: “This is a very large amount. I have defeated ISIS. We have done a very good job. But the great amount of costs is a distressing fact”. We would like to remind that Pentagon has spread the information about the US spending $1.52 trillion on military operations in the Middle East from 2001 to 2017. Based on research of Watson Brown University, in 2001, the US stated that it has spent $ 4.3 trillion on military operations in Iraq, Syria, Afghanistan and Pakistan. It is expected that this amount will reach $ 5.6 trillion in 2018 fiscal year.

Meanwhile, the statement issued by the White House after completion of the trilateral meeting i.e. on April 4, regarding the fight against terrorist ISIS in Syria, is also worth of mentioning: “The military fight against ISIS will be ended. The US and its allies are committed to destroy ISIS. And they should cooperate in order to prevent re-organization of ISIS. We expect activities of the regional countries and UN in this area in order to prevent reorganization of ISIS and to preserve peace. The US will stay in Syria for some more period. But after expiry of some period it will leave this country”. This can also be considered as a specific appeal to regional countries. Or it may be assumed that the US stated its target in such a manner to the participants of the trilateral meeting held in Ankara on April 4. In other words, the US does not leave Syria, and it will continue the fight against ISIS in the region, and it has stated that the US is ready for cooperation with the regional states in this area.

It is natural that the solution of such problems as establishment of peace in Syria, returning of refugees to their homes, rehabilitation of the country, and establishment of democratic Syria is desirable. The tripartite meeting also increases confidence in making steps in this area in the future. In any case the proactive involvement of the neighboring states of Azerbaijan into solution of the Syrian conflict may be considered as a positive case. This shows that the regional states and their neighboring countris may solve this problem if they approach it in the framework of international law. Even the parties who take a different stand will confront with an accomplished fact in such a case. Solution of conflicts or making real steps in this area also contributes to development of optimistic attitude of the Azerbaijani community towards peaceful liberation of Nagorny Karabakh from occupation. Not only Azerbaijan, but also neighboring countries suffer from the continuing occupation of the Nagorno-Karabakh and adjacent regions. As far as the occupation is lasting, the Western countries continue their attempts to increase its role in the region and to strengthen their positions. And the expediency for Tehran and Moscow of their strengthening in the Southern Caucasus does not seem convincing. Therefore, the neighboring countries of Azerbaijan can be interested in liberation of Nagorno-Karabakh from occupation in order to satisfy at least their political, economic, social and military interests. Otherwise, similar events may arise some day on their territories as well.