Pashinyan’s next fiasco: Known and unknown sides of his visit to Italy - COMMENT

Pashinyan’s next fiasco: Known and unknown sides of his visit to Italy - COMMENT Armenian Prime Minister Nikol Pashinyan paid a visit to Italy on November 20-22. 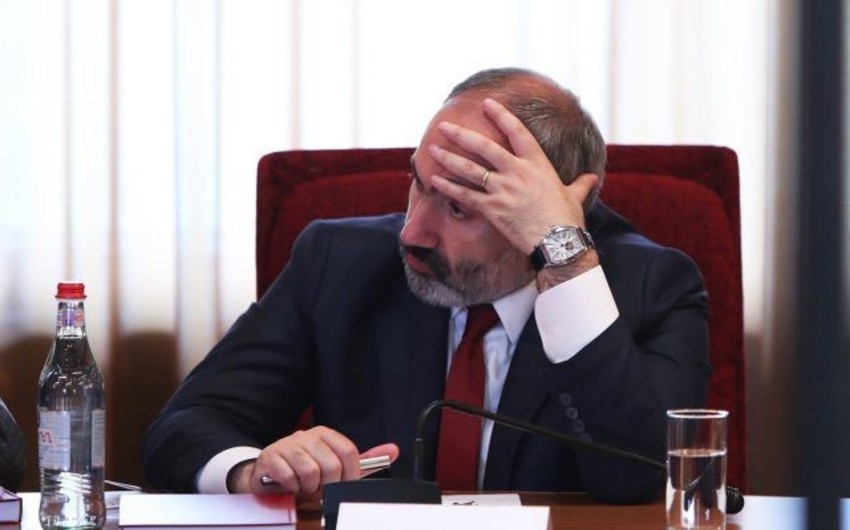 Report informs that the Armenian side has long been seeking to implement this visit and asking the Italian officials side about it.

Thus, Armenia is seriously concerned about strategic partnership and close cooperation between Azerbaijan and Italy in various fields, top-level political dialogue, wide exchange in the economic and cultural sphere: "In particular, Armenia is aware that Italy is Azerbaijan’s largest trading partner, and next year, after the launch of the TAP project, cooperation between the two countries will intensify."

However, despite Armenia's willingness, Pashinyan could not meet with Italian President Sergio Mattarella. His meeting with the chairman of the Chamber of Deputies, Roberto Fico also failed. Among officials, he held meetings with Italian colleague Giuseppe Conte and Senate President Maria Elisabetta Alberti Casellati.

At the last meeting, there was a diplomatic scandal. According to Italian media, Nikol Pashinyan arrived at a meeting with the chairman of the Italian Senate ahead of time and had to wait for her. When Maria Elizabeth Albert-Casellati appeared in the hall, Pashinyan roughly turned his back to her and headed towards the room where the meeting was to be held. This act of the Prime Minister of Armenia had caused surprise. So, Pashinyan tried to show that Casellati made him wait a long time. However, this is contrary to diplomatic ethics, and the chairman of the Italian Senate arrived at the meeting on time. During the visit, Pashinyan planned two business forums - in Milan and Rome. In this regard, relevant announcements were made, and Italian companies were invited to register for participation in the event. None of the Italian officials took part in it.

In Rome, the event did not take place at all. The event in Rome was to be organized by the Italian Trade Agency (ICE) under the Ministry of Economic Development of the country. As a result, Pashinyan was glad to meet with the head of ICE, the business forum was canceled. The visit was mainly remembered by the meetings of Pashinyan with the Armenian communities in Venice, Milan and Rome. In Milan, a scandal also occurred at a meeting with the community. During the meeting, a member of the local Armenian community, a doctor made a fuss, sharply criticizing the propaganda of total hatred in the country after Pashinyan came to power, said that the prime minister was pursuing an inept domestic and foreign policy, urged him and the government to resign. Pashinyan was confused.

Having found out that Azerbaijani students will participate in the meeting and fearing their questions and comments, the Armenian side asked the organizers to liquidate part of the event with questions from the audience and did not provide students with the opportunity to ask questions. At the end of the event, Azerbaijani students tried to block Pashinyan’s road and present him a map showing the aggression of Armenia against Azerbaijan, but he left the venue with the help of bodyguards. "

During his stay in Milan, president of the region, Lombardy Atilio Fontana did not want to meet with N. Pashinyan, as a result of the efforts of the local Armenian community, the deputy president of the region, Fabrizio Sala, met with him. Attention was drawn to the fact that during the visit of Pashinyan to Milan, Italian press, the newspapers Opinione and Notizie Geopolitiche reflected such topics as the unconstructive position of Armenia on the Armenian-Azerbaijani conflict, internal socio-political tension in Armenia, the government’s persecution of political opponents , interference with the courts.

The Prime Minister of Italia in a media statement after meeting with Pashinyan and commenting on issues related to the conflict, said that he carefully listened to the views and assessments of the Prime Minister on the Nagorno-Karabakh issue: "For my part, I expressed the position that Italy supports a stable and long-term solution to the conflict through dialogue, as well as the importance of sustainability and strength of dialogue. In relation to possible military means that can aggravate the conflict, we see dialogue as the only way to resolve it. The dialogue, of course, must correspond to the political will of the parties in terms of patiently preparing the peoples for the benefits that the peace process will bring. We support the mediation efforts of the co-chairs of the OSCE Minsk Group, and in any case, we are ready to contribute to the restoration of negotiations that will ensure stability and security in the region. " In other words, the Italian Prime Minister called on the Armenian leadership to negotiate with the mediation of the OSCE Minsk Group to ensure stability and security in the region and offered his services in this context. "

As you can see, the visit to Italy was long planned and Armenian prime minister cherished great plans, but no result was produced.  Or may be owing to the visit the head of the Armenian government learned to follow the rules of diplomatic ethics?